The rising incidence of bacterial infections that affect the gastrointestinal tract has played a key role in driving demand within the global enteric disease testing market. The medical fraternity gives tremendous attention to new-age enteric testing technologies, mainly due to the accuracy and precision of this technique. Furthermore, use of enteric disease testing to determine the nature of microbes that have penetrated the host cells of the body has also driven market demand. Therefore, the total volume of revenues within the global enteric disease testing market is expected to increase by leaps and bounds in the coming times. As microbial studies within medicine gain popularity, new research lines are projected to come to the fore within medicine.

Enteric diseases are gastrointestinal infections caused by microbes such as bacteria, viruses, and parasites when they enter the body through the mouth or intestinal systems. Various microbes responsible for enteric infections include salmonella, shigella, rotavirus, norovirus, c. difficile, cryptosporidium, vibrio, and campylobacter. These diseases may range from asymptomatic to having mild to severe symptoms such as abdominal cramps, bloody diarrhea, stool containing blood or pus, fever, and weight loss. Incubation period varies from few days to few weeks depending on the disease and severity. In order to reduce the chance of developing complications, these diseases need to be diagnosed early. 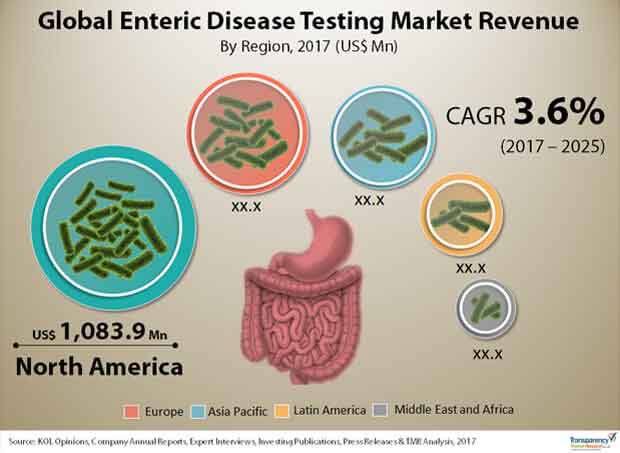 The global market for enteric disease testing has been segmented broadly on the basis of different pathogens causing enteric illness, namely bacteria, viruses, and parasites. The market is further segmented into various diseases caused by respective pathogens, such as salmonellosis, shigellosis, and campylobacteriosis, caused by enteric bacteria. Leading viral and parasitic enteric diseases include norovirus and rotavirus infections, giardiasis, amebiasis, and cryptosporidiosis. Key testing methods in the global enteric disease testing market include immunoassay testing, conventional testing, and molecular diagnostic testing. Further, the market has been segmented according to end use into hospitals, diagnostic laboratories, and physician offices.

Asia Pacific, accounting for more than 50% of the total global population, represents a profitable market for enteric disease testing in terms of growth and potential. The region is associated with unsafe drinking water, poor sanitation, and unhygienic conditions, and thus witnesses a large percentage of population infected with enteric microbes. The market for enteric disease testing is primarily driven in this region due to the high prevalence of enteric infections, rising awareness, inception of rapid diagnostic tests and continuously improving economy of India and China, leading to increased healthcare expenditure.

This report on enteric disease testing market studies the current as well as future prospects of the market globally. The stakeholders of this report include companies and intermediaries engaged in the manufacture, commercialization, providing test kits for enteric disease testing as well as new entrants planning to enter this market. This report comprises an elaborate executive summary along with a market snapshot providing overall information of various segments and sub-segments considered in the scope of the study. This section also provides the overall information and data analysis of the global enteric disease testing market with respect to the leading market segments based on disease indication, testing methods, end-user, and geographies.

Each of the market segments have been extensively analyzed based on the market related factors such as incidence and prevalence of enteric bacterial infection and rise in application of molecular diagnostics for enteric disease testing. Moreover, historical year-on-year growth have been taken into consideration while estimating the market size. The market size and forecast in terms of US$ million for each segment has been provided for the period from 2015 to 2025. The report also provides the compound annual growth rate (CAGR %) for each market segment for the forecast period from 2017 to 2025, considering 2016 as the base year.

The market overview section of the report explores the market dynamics such as drivers, restraints, and opportunities that currently have a strong impact on the enteric disease testing market and could influence the market in the near future. Market attractiveness analysis has been provided in the market overview section in order to explain the intensity of competition in the market across different geographies. The competitive scenario among different market players is evaluated through market share analysis in the competitive landscape section of the report. All these factors would help market players to take strategic decisions in order to strengthen their positions and expand their shares in the global enteric disease testing market.

Geographically, enteric disease testing market has been segmented into five major regions: North America, Europe, Asia Pacific, Latin America, and Middle East & Africa. The market size and forecast for each of these regions has been provided for the period from 2015 to 2025, along with their respective CAGRs for the forecast period from 2017 to 2025, considering 2016 as the base year. The report also provides with market size and forecast for major countries in the respective regions. A detailed qualitative analysis of factors responsible for driving and restraining the market growth and future opportunities has been provided in the market overview section. This section of the report also provides with market attractiveness analysis, porter’s five forces analysis, and market share analysis by key players, thus presenting a thorough analysis of the overall competitive scenario in the global enteric disease testing market.

The global enteric disease testing market is segmented as follows: