Drug capsules made from gelatin act as superior carriers of both, hydrophilic and lipophilic drugs, and render them protection from degradation. In the past few years, drug delivery through capsules has undergone significant transformation in terms of product enhancement, to ensure high quality prognosis and patient comfort. New and improved capsule sealing techniques, innovations in fill material, and improvements in capsule shells are levelling the playing field for key stakeholders. The larger profit pool accruing from these is bolstering the growth of the empty capsules market, which is all set to expand at a CAGR of ~7% during the forecast period of 2019-2027.

With the proliferation of R&D initiatives, the global empty capsules market is foreseen to witness an exceptional growth rate. Clinical trials conducted toward the encapsulation of new and existing drugs are grabbing eyeballs, and capturing a white space in the market which had previously remained untapped. Factors such as the penetrative reach of preventive care in developing regions, high bioavailability, and elasticity of capsules will fuel their demand. As a result, the global empty capsules market will see a near two-fold growth over the forecast period. 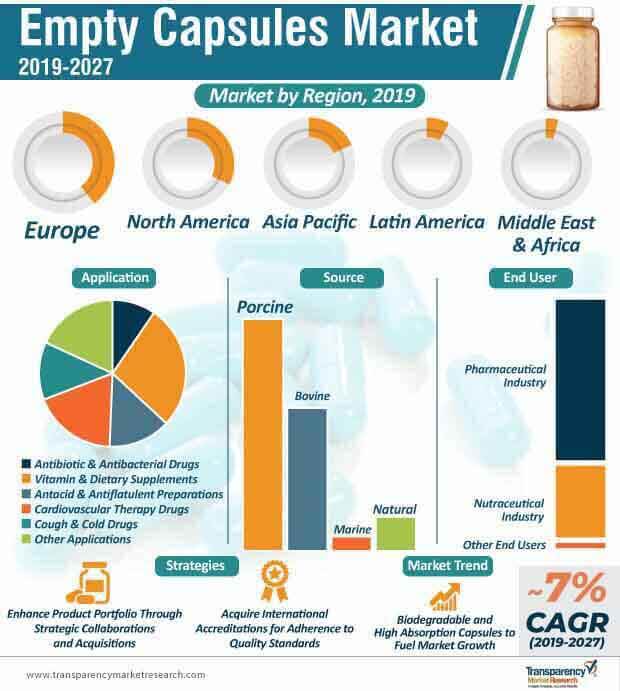 Gelatin, historically and predominantly has been used as a film former for hard and soft shell capsules. As it is a purified protein obtained from the collagen of animals, speculations have risen about its use amid concerns over animal safety. Consequently, the gelatin capsules segment is projected to lose market share during the forecast period. This will also drive the demand for environment-friendly, non-gelatin capsules, which will see a meteoric growth of ~11% during the forecast period. Despite the over-arching claims surrounding its controversial usage, gelatin capsules will continue to dominate the market, accounting for ~89% of the market share in 2027.

Cardiovascular Drug Capsules Cashing in, Uptick in Demand for Vitamin and Dietary Capsules

In terms of revenue, the cardiovascular therapy drugs segment captured the second-largest share in the market of empty capsules in 2018. Being the number one cause of death, globally, its impact is significant. Cardiovascular drug capsules will see an uptick in sales and profitability, which is essential for its sustained, long-term growth. It will be one of the fastest-growing segments, at an impressive CAGR of ~8%, and will see its valuation double by the end of 2027.

A paradigm shift towards preventive healthcare will see a surge in the uptake of vitamin and dietary supplements. Health consciousness and evolving dietary habits will drive their demand, propelling this segment into a high-growth phase. With vitamin and dietary supplements capturing the largest chunk of the empty capsules market share in 2018, its dominance will continue through 2027.

Pharmaceuticals accounted for 65% of the empty capsules market share in 2018. Even though this segment is projected to lose some of its market share by 2027, it will retain its hold in the market right through the forecast period. Fuelled by new therapeutic drugs, these will continue to drive the demand for empty capsules.

As animal sources of gelatin capsules are culture- and religion-sensitive, this could impede the global empty capsules market to some extent. It would also give traction to natural or synthetic sources of gelatin, and would pave the way for their upward growth trajectory. However, product yield from these sources is comparatively lesser, though increased output from these sources is possible with technological intervention.

Healthier lifestyles have led to a rampant increase in the demand and consumption of nutraceuticals. Available in the gelatin capsule format, they are propelling the growth of the empty capsules market. Nutraceutical applications have evolved considerably over the last few years, and have gained significant recognition in the food and dietary supplements market, owing to their superlative nutritional profile and technological properties. As nutraceuticals witness greater adoption, stakeholders will respond promptly to optimize their growth and enhance competitiveness.

Europe is projected to be the most attractive region in the empty capsules market, with an attractiveness index of 1.9 during the forecast period. The presence of key pharmaceutical and nutraceutical industries along with the incessant adoption of newer technologies will be some of the factors that put Europe into the spotlight.

Asia Pacific will be the third-most attractive regional market for empty capsules in terms of attractiveness, and will see its revenue triple by the end of the forecast period. Rise in per capita healthcare expenditure in countries such as China and India will bolster the growth of the market in these regions. 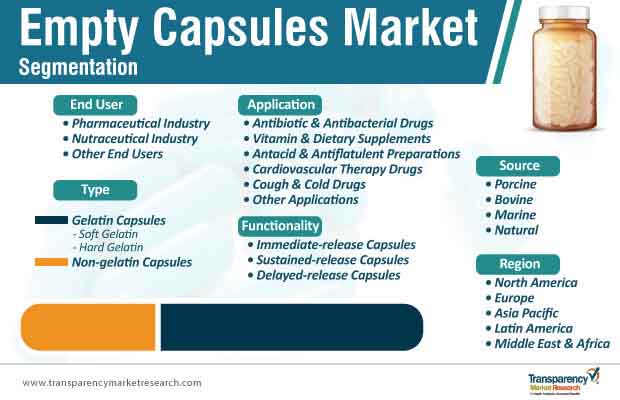 Implementing Strategies of Innovation and Expansion to Tap into Newer Markets

The global market for empty capsules is fairly consolidated, with a few players such as

Rapid Expansion of Nutraceutical and Pharmaceutical Industry: A Key Driver

The report includes an elaborate executive summary, along with a snapshot of the growth behavior of various segments included in the scope of the study. Furthermore, the report sheds light on the changing competitive dynamics in the global empty capsules market. These indices serve as valuable tools for existing market players as well as for entities interested in entering the global empty capsules market.

A unique research methodology has been utilized by TMR to conduct comprehensive research on the growth of the global empty capsules market and arrive at conclusions on the future growth prospects of the market. This research methodology is a combination of primary and secondary research, which helps analysts warrant the accuracy and reliability of the drawn conclusions.

These primary and secondary sources have provided exclusive information during interviews, which serves as a validation from empty capsules market leaders. Access to an extensive internal repository and external proprietary databases allows this report to address specific details and questions about the global empty capsules market with accuracy. The study also uses the top-down approach to assess the numbers for each segment, and the bottom-up approach to counter-validate them. This has helped in reaching TMR’s estimates on the future prospects of the global empty capsules market more reliably and accurately.