Blood gas and electrolyte analyzers have been subject to significant advancements over the years, witnessing a massive transformation from central laboratory applications to treatment for respiratory ailments and point-of-care diagnostic uses. Blood gas testing has been significant for critically ill patients for several years now and manufacturers of analyzers are conscious of the needs of the critical care testing, and offer devices that are easy-to-use and provide quick and accurate results. Moreover, manufacturers have focused on offering smaller sized, multi-parameter monitoring devices with expanding test menus due to increasing demand for advanced analyzers.

Transparency Market Research estimates that the Europe and Middle East market for blood gas and electrolyte analyzers will expand at a CAGR of 4.7% in terms of revenue from 2016 to 2024. Expanding at this pace, the market is expected to rise from a valuation of US$114.4 mn in 2015 to US$170.5 mn by 2024. In terms of volume, the market is exhibit a slightly higher 5.0% CAGR over the said period. 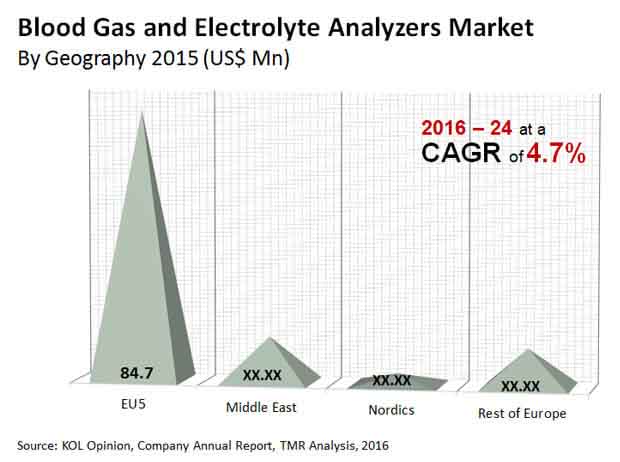 These factors have shifted the preference of consumers to portable analyzers that can be used in point-of-care sites. Portable blood gas and electrolyte analyzers are easy to transport and prove to be the most cost effective when employed in test locations with a low test volume per day. Owing to these factors, the segment of portable analyzers is expected to gain wider acceptance in Europe and Middle East and exhibit a more than 5% CAGR in terms of volume as well as revenue over the forecast period.

Geographically, the market in Europe and Middle East has been segmented into three regions: EU5, Nordics, and Middle East. The market in the EU5 region accounted for a massive share of 74% of the EME blood gas and electrolyte analyzers market in 2015. The region is expected to retain its dominant stance in the market in the near future as well, chiefly owing to the sophisticated health care sector, with major focus on quality of care in countries in Europe. Europe is the second largest medical devices market, and is also identified as a rapidly growing point-of-care diagnostics market. Germany dominated the EU5 market with nearly 36% share in 2015 and is expected to be at the forefront in the next few years.

The Nordics region, comprising countries such as Denmark, Iceland, Finland, Norway, and Sweden, accounted for a minimal share in the market in 2015. The Middle East accounted for a moderate 12.4% share in the market in the said year. The region offers opportunities in the blood gas and electrolyte analyzers market due to growing prevalence of a number of diseases leading to increase in patient burden. In the past few years, countries in the Middle East have rapidly developed their health care sectors and are making significant investments to improve the quality of health care in order to become attractive destinations for medical tourism.

Blood gas and electrolyte analyzers depend on critical progressions throughout the long term, witnessing a drastic change from focal research facility applications for the treatment of respiratory afflictions and point-of-care analytic employments. Blood gas testing has been huge for basically sick patients for quite a long while at this point and makers of analyzers are aware of the necessities of the basic consideration testing, and offer gadgets that are not difficult to-utilize and give speedy and precise outcomes. Additionally, makers are focusing on offering more modest measured, multi-boundary observing gadgets with expanding test menus because of expanding demand for cutting edge analyzers.

Development in number of patients being treated in NICUs, ICUs, and department for emergency, coupled with the ascend in patients experiencing ongoing infections; innovative progression in blood gas and electrolyte analyzers, and expansion in number of item endorsements are the main considerations that drive the market development. Be that as it may, intricacy engaged with the translation of blood examination information goes about as a limiting variable for the market development. Expansion in venture by significant clinical diagnostics monsters and improvement in the medical care offices in Asia-Pacific give development freedoms to the market.

With a surge in point-of-care diagnostic devices due to obvious advantage of faster disease diagnosis, the market is expected to witness growth. Blood gas and electrolyte analyzers are point-of-care diagnostic devices employed for blood testing. The blood gas analyzer measures partial pressure of oxygen in a patient’s body, while the electrolyte analyzer measures concentration of vital elements such as sodium, potassium, and calcium. Results of these tests help in accurate diagnosis of various conditions such as asthma, chronic obstructive pulmonary disease (COPD), kidney failure, heart failure, uncontrolled diabetes, severe infections, and drug overdose. Blood gas and electrolyte analyzers have been useful in assisting in accurate diagnosis of numerous diseases. Hence, usage of these devices has increased considerably in the recent past. Hence, these devices have become an integral part of intensive care units (ICUs) and emergency medical services.

Increase in demand and innovation in the medical devices technology have led to evolution of devices into compact, multi-component analyzer devices. This advancement in technology has driven the market for devices measuring narrow parameters such as blood gas and electrolytes. The blood gas analyzers market is constantly evolving due to technological advancements in medical devices. Modern, miniaturized blood gas analyzers are capable of analyzing an array of parameters and provide results in shorter turnaround time. Faster diagnosis helps prescribe accurate therapy at an early stage of disorder, which helps avoid complications.

The combination analyzers segment of the market is expected to expand at the maximum growth rate during the forecast period. Portability of blood gas analyzers has extended their application in emergency and ambulatory care. Point-of-care diagnosis has created a prominent position in the health care industry due to its advantage of bed-side care. Furthermore, synchronization of blood gas analyzers has made the patient record management more convenient.

The EME blood gas and electrolyte analyzers market has been segmented as follows: