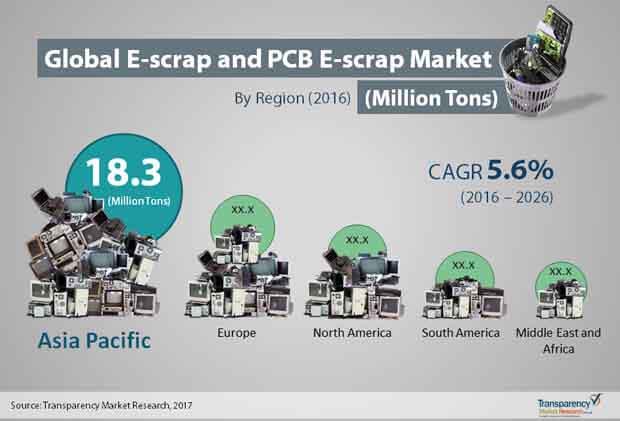 The global e-scrap and printed circuit board (PCB) e-scrap market has been segmented on the basis of production source of e-scrap, type of PCB e-scrap, and material extracted from PCB e-scrap. Based on source of e-scrap, the market is classified into household appliances, IT and telecommunication products, entertainment devices, and others. In 2015, e-waste produced from household appliances accounted for the maximum share of the global e-waste market, at around 45% of the volume of the overall e-scrap and printed circuit board (PCB) e-scrap market. Moreover, the segment is expected to show sustainable growth throughout the forecast period due to high usage of various types of electronic equipment in household application in terms of units.

In terms of material extracted from PCB e-scrap, the market is segmented into ferrous components, metals (copper, aluminum, tin), and precious metals (gold, silver, palladium). In 2015, the metals segment including copper, aluminum and tin held the largest volume share of around 63% and value share of 78% in the overall e-scrap and PCB e-scrap market in 2016.

The e-scrap market in North America is also projected to show moderate growth during the forecast period, but Europe held the second-largest volume share in the global e-scrap and PCB e-scrap market in 2016. The e-scrap market in Europe, valued at US$12.8 bn in 2016, is growing rapidly and is expected to maintain its growth due to growth of the manufacturing industry and rising demand for electronic equipment from households in this region.

Moreover, the e-scrap market in Latin America and the Middle East and Africa is anticipated to witness sustainable growth in the near future, with the Middle East and Africa market for e-scrap and PCB e-scrap likely to exhibit a solid 5.8% CAGR in the 2016-2026 forecast period. The major factor fuelling the market’s growth in these regions is the rising adoption of electronic equipment and mobile phones in countries such as Saudi Arabia, the UAE, Israel, and Turkey.

With more and more advances in terms of technology, the demand for electrical and electronic equipment has grown drastically. Consistent innovations in the field of electrical and electronics technologies have further cut down the overall life of these products. This has led to more generation of e-waste. E-waste chiefly consists of computers, laptops, television sets, mobile phones, and other household electronic devices.

The global market for e-scrap and printed circuited board e-scrap could be segmented in terms of the different types of source and by type. The global market could also be segmented in terms of geography as well. Such in depth and precise segmentation of the global e-scrap and printed circuited board e-scrap market offered by the report helps in grasping the all-round growth prospects and the future outlook of the different segments of the market and thus, helping the potential buyers to make informed decisions while investing in the market.

The report on e-scrap and printed circuited board e-scrap market provides the analysis and forecast on regional as well as global level. It offers historical data of the year 2015 along with the anticipated data of 2016, and a forecast data up to year 2026 in terms of revenue as well as volume. The report also provide vital driving and impeding factors for the development of the global e-scrap and printed circuited board e-scrap market and their impact on each region over the duration of the given forecast period. The report also offers the value chain analysis of the market with a list of key players. The research report on the global market for e-scrap and printed circuited board e-scrap provides vital growth prospects and key trends and opportunities that may come up in the market over the course of the given forecast period. The research report is the result of in-depth and extensive primary as well as secondary research methodologies backed by crucial market insights offered by the industry professionals.

The global market for e-scrap and printed circuited board e-scrap is chiefly driven by the increasing number of electronic products in households of urban areas. This growth in products can be attributed to growth in the disposable income of people in these areas. They are generating maximum amount e-waste from which recovering different metals is very important so as to save energy. In addition to this, recycling of this electronic waste also helps in bringing down the burden on the mining sector to provide primary metals.

Sustainable management of resources entails the segmentation of hazardous resources from the electronic waste and the maximum amount recover of vital metals. Thus, the e-waste recycling helps in cutting down the pollution, conserve energy, and cut down greenhouse emissions.

The global market for e-scrap and printed circuited board e-scrap can be segmented into five key regions depending upon the geography. The key regional segments of the market include North America, Asia Pacific, the Middle East and Africa, Europe, and Latin America.

Some of the key players plying their trade in the global market for E-scrap and printed circuit board (PCB) e-scrap market include names such as Boliden Group, Dowa Holdings Co. Ltd., Ultromext Ltd., Umicore N.V., and LS-Nikko Copper Inc. among others. These companies are projected to broaden their scrapping facilities to expand their business over the coming years of the forecast period. In addition to this, numerous players in the market are also expected to concentrate on streamlining their management of e-waste to make sure the sustainability of resource management and maximum recovery of the precious metals.