Drones are unmanned aircraft. They are formally known as unmanned aircraft system (UAS) or unmanned aerial vehicle (UAV). They can also be called flying robots. Drones can fly autonomously or can be remotely controlled. Drone surveillance services refer to the different types of work that drones carry out for companies in the energy industry. The type of work primarily refers to monitoring and surveillance of energy industry assets such as pipelines, power plants, wind turbines, platforms, and solar panels.

Energy industry consists of various types of assets such as wind turbines, solar panels, oil and gas distribution pipelines, power plants, associated distribution lines, ports, onshore and offshore platforms, and mines. It is important to monitor and inspect these on a regular basis to keep them in a good working condition. Carrying out this task manually is time consuming. Drones can significantly lower the time taken to carry out the tasks mentioned above. Furthermore, energy industry assets are often located in remote areas such as forests or in difficult terrains such as mountains. They can also be located in hard-to-reach areas such as offshore. This makes it difficult for employees to monitor them and gather data. It can even put employees at the risk of their lives. Data collected in such an uncomfortable manner can also be erroneous. Drones eliminate the dangerous element from the task of monitoring assets and collecting data. The ability to fly drones around assets also improves data collection accuracy. A drone operator can focus exclusively on data collection rather than expend time and energy worrying about health and safety. These advantages of drones have further endeared them to the energy industry. 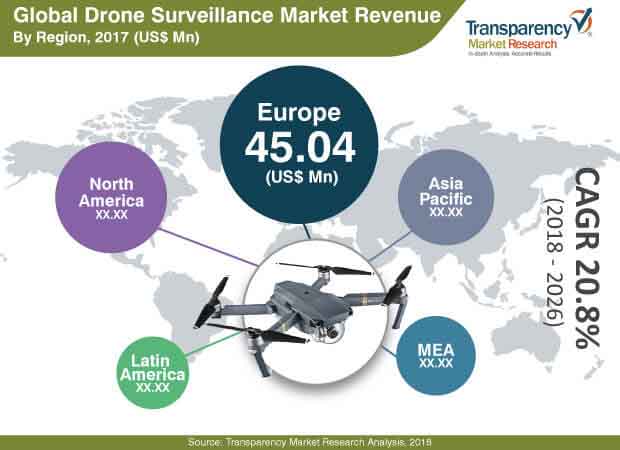 Drone-related regulations are still to come into effect in several countries such as India. However, companies have already started offering their services to clients. Such an unregulated environment does not inspire confidence in potential clients. It also hampers the development of new applications of drones. Lack of regulations has been an important reason for the development of a niche market segment related to individuals providing drone surveillance services, instead of companies. The number of such pilots is rising. This has resulted in intense competition between the two types of service providers, leading to considerable pressure on the charges that can be quoted to clients for monitoring and data analysis work. However, lowering of charges is not the only concern that the situation has generated. The capability of pilots and quality of analysis are also causes of concern. Regulations are needed to ensure that the lack of quality work by individual drone pilots does not erode the positive sentiment in the entire drone surveillance market for the energy industry.

Majority of drone surveillance companies can provide comprehensive asset monitoring and data collection services. However, these companies need to have separate software and skillsets for data analysis. In the long term, companies in the energy industry can be expected to develop their own teams of drones and drone pilots. However, companies are unlikely to develop the necessary analytical software to analyze the collected data. The ability to provide specific services under analytics, predictions, and forecast is projected to be the major differentiator among drone surveillance companies. Similarly, automation of data collection and analysis is likely to reduce costs, increase efficiency, and go a long way in helping companies outperform competitors.

Drones are generally flown high in the air. They are equipped with advanced sensors, cameras, and other gadgets to perform the necessary functions. Maneuvering drones in open air spaces is relatively easier compared to doing the same in closed spaces. Essentially, it is easier to monitor visible assets with drones rather than those located in enclosed spaces such as inside offshore platforms. It is also easier to maintain high speed and accuracy of data collection when drones are operating in an open space environment. Thus, drones are extensively used to monitor pipelines in power generation and oil & gas industries.

In terms of the type, multirotor was the dominant segment of the market in 2017. Multirotor drones offer higher level of maneuverability. This is the major advantage of this type of drones. In terms of application, pipeline monitoring & inspection was the prominent segment in 2017. Pipelines, used to carry oil and gas or electricity, are major assets of the energy industry. They are also relatively easier to monitor. Based on region, Europe held significant share of the global market in 2017. The region possesses a wide range of relevant assets, ranging from wind turbines and solar panels to traditional pipelines. These are monitored using drones.

Highly Fragmented Market, Consolidation Not Expected in Near Future

More than 200 companies operate in the drone surveillance market for the energy industry. This number has been increasing at a rapid pace. Companies are striving to increase their client base, primarily by expanding their geographic reach. Key players operating in the market include Aerodyne Group, Azure Drones SAS, Cyberhawk Innovations Limited, Martek Aviation, and Sharper Shape Inc.

The report includes detailed value chain analysis, which provides a comprehensive view of the global drone surveillance market for the energy industry. Porter’s Five Forces model for the drone surveillance market for the energy industry has also been included to help understand the competitive landscape in the market. The study encompasses market attractiveness analysis, wherein types and applications are benchmarked based on their market size, growth rate, and general attractiveness.

The global drone surveillance market for the energy industry has been segmented as follows: