The dissolved gas analyzer market is poised to cross the half-billion dollar mark by 2027, and a significant chunk of this revenue will arrive from the power industry. Considering the gravity of concerns associated with the use of faulty power transformers, operators of utility businesses are observed establishing frequent repair and maintenance programs for fault detection at an early stage by leveraging dissolved gas analyzers.

In the technology-driven landscape, players in the dissolved gas analyzer market rely on innovation for consolidation, and it is anticipated that, ongoing undercurrents of the Fourth Industrial Revolution will further complement the functionalities of these analyzers with the help of automation. 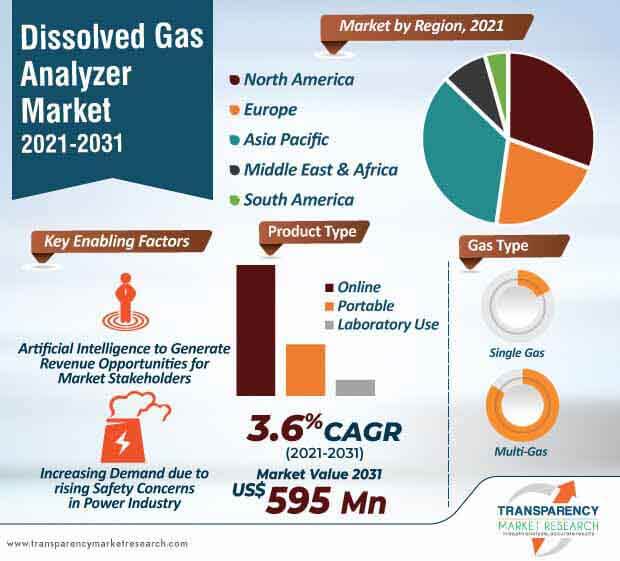 In the power industry, where drudgery is a common feature, utility operators are rethinking their business models in the lines of intelligent ones that eliminate human intervention and offers remote access to the site. Given the influence of this demand, players in the dissolved gas analyzer market are integrating artificial intelligence with their products to develop neural networks that could facilitate AI-based DGA monitoring.

Several efforts have been taken by renowned institutes to analyze the combination of this technology. In 2019, Electric Power Research Institute (EPRI) categorized over 640,000 DGA records from 46,600 transformers from 27 utilities operating globally, to evaluate the scope of AI in the future development of DGAs.

Competition in the DGA market is based on parameters such as longer lifespan, budget-friendliness, reliability, sensitivity, and maintenance requirements, which has led to the development of non-dispersive infrared (NDIR) gas analyzers. The competency of NDIR-based gas analyzers to seamlessly operate with chemicals is underpinning these analyzers in exceeding their current adoption rate.

Stuck in a neck-to-neck competition with other brands? Request a custom report on “Dissolved Gas Analyzer Market”

In 2019, the government of India became successful in distributing electricity to 25 Mn new households in rural areas. In 2017, China achieved 100% electrification for its 1.4 Bn population. The Myanmar National Electrification Plan intends to electrify 100% of the nation’s households by 2030. Such stats recorded in the TMR study imply that, Asia Pacific makes a high potential DGA market on account of government manifestos of countries such as China, India, and Japan to achieve rural electrification, which has increased the concentration of power plants in these countries.

A magnified focus on the safe and efficient operations of dissolved gas analyzers is hard-pressing market players to take a qualitative approach. The trend is also likely to fast-penetrate in India and China, which will necessitate the shift towards advanced technology in Asia Pacific, and further improve the region’s share in the dissolved gas analyzer market. 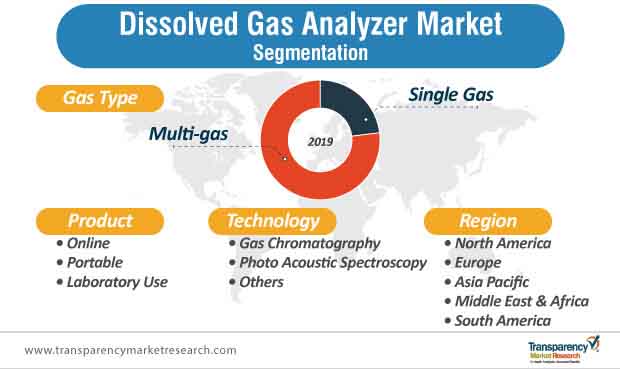 Authors of the TMR study opine that, the dissolved gas analyzer market is projected to advance at an average CAGR of ~4 percent during the period of 2019-2027. To win in this competitive landscape, players in the DGA market resort to technology in order to stay ahead of the growth curve. For instance, a leading player - GE Electric Co., announced the introduction of Kelman DGA 900, which is an advanced version of online multi-gas and moisture analyzers.

Partnerships and collaborations with power generation companies are also observed as a strategic move for market players. For example, Vaisala Oy offered its DGA solutions to Zhejiang Zheneng Shaoxing Binhai Thermoelectric, to improve the service life of its transformers and reduce the occurrence of transformer failures during operations.

In the report on the global dissolved gas analyzer market, we have discussed individual strategies, followed by company profiles of providers of DGAs. The ‘Competition Landscape’ section has been included in the report to provide readers with a dashboard view and company market share analysis of key players operating in the global dissolved gas analyzer market.

Key indicators of market growth, which include value chain analysis, supply chain analysis, and compound annual growth rate (CAGR), are elucidated in TMR’s study in a comprehensive manner. This data can help readers interpret the quantitative growth aspects of the global dissolved gas analyzer market for the duration of the forecast period.

The report includes an elaborate executive summary, along with a snapshot of the growth behavior of various segments and sub-segments included in the scope of the study. Furthermore, the report sheds light on the changing competitive dynamics in the global dissolved gas analyzer market. These indices serve as valuable tools for existing market players as well as for entities interested in entering the global dissolved gas analyzer market.