Defoamers are also referred as antifoaming agents. These are chemical additives that reduce and hamper the foam formation in industrial processes. Defoamers are generally insoluble in a foaming medium and possess surface active properties. They offer essential characteristic such as low viscosity and spread rapidly on the foamy surface. Defoamers have affinity to air-liquid surfaces, where they threaten the formation of foam lamellas. This ruptures air bubbles and breakdown of the surface foam. The global defoamers market was valued at around US$ 7500.0 Mn in 2017 and is anticipated to expand at a CAGR of more than 4.5% from 2018 to 2026. 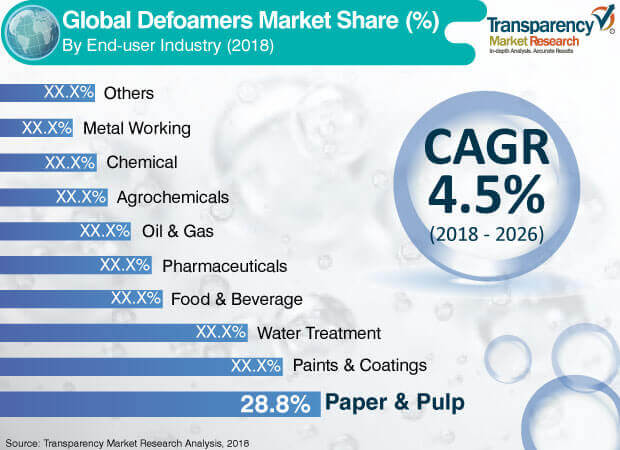 The problem of foaming in water-based paints is primarily found during the pigmentation process in paint manufacturing plants. The entrapped air within the pigment is displaced as wetting occurs and becomes entrapped in the mill base. It is also common in water-based printing inks and with solvent-based paints and inks. Silicone-based, silicone-free, oil-based, or wax-based defoamers can be used in paint and coating applications depending on their formulations and physical properties.

Defoamers are extensively utilized in the sugar beet industry. They are used in fried foods such as potato chips and various other fried snacks. They are employed in the fast food industry for products such as fried chicken, chicken nuggets, and French fries. Silicone-based defoamers are used in most aerated drinks and in cooking oils to prevent foaming, while deep frying. Defoamers can be employed directly or incorporated in low-foaming cleansing agents. Demand for defoaming agents in the food industry is projected to increase, as they curb effusions or effervescences while preparation and serving.

Demand for defoamers is high from water treatment and paints & coatings industries. Defoamers play an important role in industrial manufacturing and processing of liquid paints and coatings. They are effective in application of coatings with brushes, rollers, or more sophisticated application methods such as spray or curtain coatings. Implementation of stringent environmental regulations has led to the replacement of solvent-based systems with waterborne coating systems. Large amounts of special surfactants are utilized in water-based coatings. This has increased the need for highly efficient defoamers. Excessive foam formation is likely to result in inefficiency; long grinding time, storage instability of paints and coatings formulation, and other issues such as crater formation, loss of adhesion, gloss reduction, and loss of opacity. High usage of defoamers in the paints & coatings industry is expected to augment the defoamers market during the forecast period.

Major players operating in the global defoamers market include Ashland Global Holdings Inc., BASF SE, Clariant International AG, Dow Corning Corporation, Elkem Silicones, Evonik Industries AG, Momentive Performance Materials Inc., Shin-Etsu Chemical Co., Ltd., and Wacker Chemie AG. These are large chemical companies having dedicated manufacturing technologies and experience and expertise to manufacture defoamers. The defoamers market is highly fragmented; the top five manufacturers accounted for nearly 20% share of the market in 2017. Most of the defoamers are produced in Europe. Major manufacturers and suppliers of silicone defoamer are located in the U.S., Germany, Belgium, the Netherlands, and the U.K. Manufacturers functioning in the market are widening their distribution channels across developing economies to cater to the rising demand for defoamers in these countries.

Defoamers, or antifoaming agents, are chemical additives that reduce and hamper the formation of foam in industrial processes. Defoamers are insoluble in the foaming medium and possess surface active properties. They offer low viscosity and spread rapidly on the foamy surface. This is an essential characteristic of defoamers. Defoamers have an affinity toward air-liquid surfaces, where they threaten the formation of foam lamellas. This results in the rupture of air bubbles and breakdown of the surface foam.

Defoamers play a crucial role in pulp and paper mills, as they help prevent the formation of foam. They are surface active agents such as esters or amides of fatty acids and PE glycols. Various types of problems occur due to the build-up of foam in paper mills. These include difficulties in the formation of paper, creation of deposits, development of bacteria, and drainage problems. Defoamers improve drainage in kraft pulp stock and sulfite stock in pulp mills. Usage of defoamers reduces paper breaking, thus improving the function of paper machine. Defoamers reduce steam consumption. This helps save energy and other costs. These properties are anticipated to drive the defoamers market.

Demand for defoamers is high in water treatment and food & beverages segments. However, demand for defoamers in paints & coatings and metalworking fluids segments is expected to rise significantly during the forecast period. The paints & coatings industry has been growing at a significant pace due to rise in requirement for decorative paints. The metalworking fluids sector is estimated to remain lucrative during the next few years. Increase in use of innovative products and a rise in focus on process R&D are key factors driving the demand for specialty chemicals including certain additives and softeners.

Major multinational companies with high production capacities dominate the global defoamers market. These prominent companies have high market capitalization due to their integration across the value chain, as compared to other manufacturers of defoamers. Large players are highly integrated, which helps reduce production costs and to gain a competitive edge in the market. Key players focus on exclusive agreements, mergers & acquisitions, and joint ventures to enhance their market share and cater to diverse industries. Usage of defoamers has increased across the globe due to the presence of manufacturers of premium defoamer products and high performance of these products.

The report comprises a detailed value chain analysis, which provides a comprehensive view of the global defoamers market. The Porter’s Five Forces model for the defoamers market has also been included to help understand the competitive landscape. The study encompasses market attractiveness analysis, wherein end-users are benchmarked based on their market size, growth rate, and general attractiveness.

The study provides a decisive view of the global defoamers market by segmenting it in terms of product, end-user industry, and region. These segments have been analyzed based on the present and future trends. Regional segmentation includes the current and forecast demand for defoamers in North America, Latin America, Europe, Asia Pacific, and Middle East & Africa. The report also covers the demand for individual end-user industry segments in all regions.

The report provides an estimated size of the defoamers market for 2017 and forecast for the next nine years. The global size of the defoamers market has been provided in terms of volume and revenue. Market numbers have been estimated based on product, end-user industry, and region. Market size and forecast for each product and end-user industry have been provided in terms of global and regional markets.