The global cresols market is single-handedly driven by the burgeoning demand for vitamin E. Vitamin E is primarily used for fortification of food and beverages and in dietary supplements. Changing lifestyles coupled with the increasing incidence of food adulteration is leading to the greater demand for dietary supplements. The opportunity in the global cresols market was worth US$ 283.92 Mn in 2018 and is poised to reach US$ 386.95 Mn by the end of 2027, progressing at a CAGR of 3.5% therein.

However, the market needs to overcome the increasing criticism of the pricing and consumption of butylated hydroxytoluene (BHT) in order to boost its growth rate. Moreover, stringent environmental regulations pertaining to the production, packaging, transportation, usage, and disposal of cresols is hampering the growth of the market. The Environmental Protection Agency (EPA) has listed cresols as hazardous air pollutant and they are, therefore, subjected to challenging regulatory pressures. On the other hand, the increasing usage of cresols for wider automotive applications is likely to shape the growth of the global cresols market. 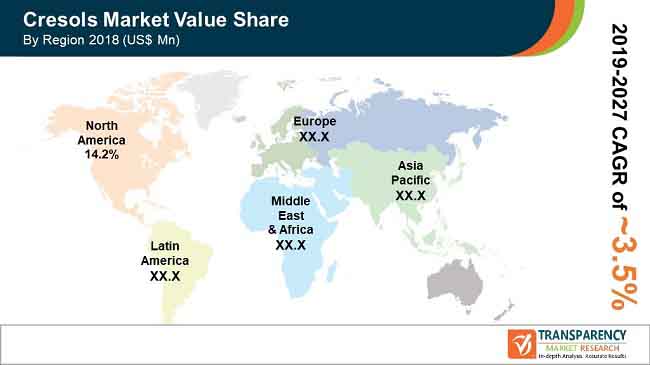 On the basis of application, the chemical intermediates segment will continue to dominate the market in terms of revenue until 2027, expanding at a rapid CAGR from 2019 to 2027.  A large portion of cresols produced worldwide is used for the manufacturing of organic intermediates such as herbicides (dinitro cresols, MCPA, and MCPP), phenolic and epoxy resins and plasticizers (phosphate esters), deodorizing and odor-enhancing compounds, and pharmaceuticals.

Based on product, the global cresols market is divided into para-cresol, meta-cresol, and ortho-cresol. Para-cresol will continue to be the leading revenue contributor until the end of 2027. It is primarily used in the production of antioxidants such as BHT. The rising demand for antioxidants for the manufacturing of food and beverages, cosmetics, pharmaceuticals, electrical transformer oil, and rubber is, therefore, augmenting the growth of the segment.

However, meta-cresol is expected to expand at a rapid CAGR during the forecast period. It is commercially used in fenitrothion and fenthion pesticides. It is also used as a precursor for synthetic vitamin E. Thus, the increasing demand for vitamin E is propelling the growth of the segment.

The key regional markets methodically examined in the report are North America, Europe, Asia Pacific, the Middle East and Africa, and Latin America. Asia Pacific was the leading segment in terms of value as well as volume in 2018 and will retain its position until 2027. The rapid expansion of the chemical and industrial sectors in China, Japan, and India coupled with the improving economic conditions is contributing to the growth of the region. Owing to this factor, the region is estimated to rise at a rapid CAGR in terms of revenue during the forecast period.

Asia Pacific will be followed by Europe. The presence of a large number of key players in the Europe region is providing a fillip to the market. The growth of Latin America can be attributed to the noteworthy growth of the nutraceutical market in Brazil. North America is anticipated to progress at a moderate pace during the same period.

Looking for Regional Analysis or Competitive Landscape in Cresols Market, ask for a customized report

Some of the key players in the global cresols market are

The rise in the number of cases of food adulteration to cope with the changing lifestyle of people and the increasing demand for dietary supplements is likely to aid in expansion of the global cresols market. Perhaps the greatest factor driving the interest for cresols is expansion popular for nutrient E, which is utilized widely in enhancements and fortress of food varieties and refreshments. It is relevant to note here that as work day is getting longer, will and time to get ready full-fledge dinners from regular and new fixings is not any more a thing. An ever increasing number of individuals are searching for simple to burn-through and prepared to eat choices in food. In any case, since this prompts various inadequacies and medical problems, individuals are currently requesting sustained food and proficient enhancements for nutrients and minerals.

The bringing down degrees of fundamental supplements is likewise brought about by corruption in food noted, prompting lack in these supplements, adding to development of dietary enhancements. It is additionally essential to note here that the worldwide cresols market will likewise see development inferable from an expansion popular for cell reinforcements. Cresol is detailed from oil and coal tar, which are a portion of the significant segments of creosote, a wood additive. Expanding interest for nutrient E in food and dietary enhancements, attributable to rising purchaser center around a sound eating regimen, is likewise expected to drive item interest throughout the next few years.

The worldwide cresol market has seen the execution of rigid guidelines with respect to the antagonistic effect of its assembling cycle. Squander created in toluene-based cresol creation is harmful to the sea-going climate. Henceforth, industry members have zeroed in on squander the board before its release. Attributable to enormous extension in the mechanical areas of the absolute most amazing economies in the Asia Pacific (APAC) like India, China, and Japan, the district will diagram a great CAGR. The development can likewise be decently ascribed to the extension of the substance business around there. What's more, as these economies improve, they add to the development of district in a considerable way.

Cresols Market – Scope of the Report

Transparency Market Research’s recent report on the global cresols market, with the help of a comprehensive outlook, provides readers with an assessment of the global market landscape. This study on the global cresols market analyzes the market scenario for the period from 2018 to 2027, wherein 2018 is the base year. This report enables readers to make important decisions with regard to their business, with the help of a wealth of information enclosed in the study.

This TMR study on the global cresols market also provides data on developments made by important players and stakeholders operating in the market, along with competition analysis. The report also provides an understanding of strengths, weaknesses, threats, and opportunities, along with market trends and restraints in the competition landscape section.

This study also offers Porter’s five forces analysis, value chain analysis, and regulatory scenario of the global cresols market, in order to elaborate crucial growth strategies of and opportunities for players operating in the market

This report answers these questions about the global cresols market, aiding major stakeholders and key players in making the right decisions and strategizing for growth of their business

This report uses an analytical triangulation method to estimate the numbers of the global cresols market, by using both bottom-up and top-down approaches

This report on the global cresols market provides segmentation of the market based on product, application, and region