Across the multi-faced applications of copper, it provides proven added value to modern life, where commercial and industrial requirements are being met on a large scale. The copper industry’s continuous focus on research, development, and validation of newer concepts to deliver a stream of innovations is transforming all associated businesses, including the copper pipes & tubes market. The role of technology to help meet the surging copper demand is also being evaluated.

Constant electric vehicle evolution has led manufacturers to introduce new EV components. Declining battery prices and government incentives for EVs are continuously showering growth opportunities for associated businesses. Copper is essential to EV technology and its supporting infrastructure. As copper pipes are used in electric vehicles, charging stations, and associate infrastructure, owing to its durability, high conductivity, and efficiency, the flourishing EV market is likely to have a positive impact on overall copper demand over the coming years.

Addressing the continual developments in the copper pipes & tubes industry, the TMR study offers detailed information about the current status quo, and the future prospects of the market. The surging demand for HVAC systems banking on the rising construction activities and growing global construction expenditure is anticipated to positively influence the global copper pipes & tubes market growth. 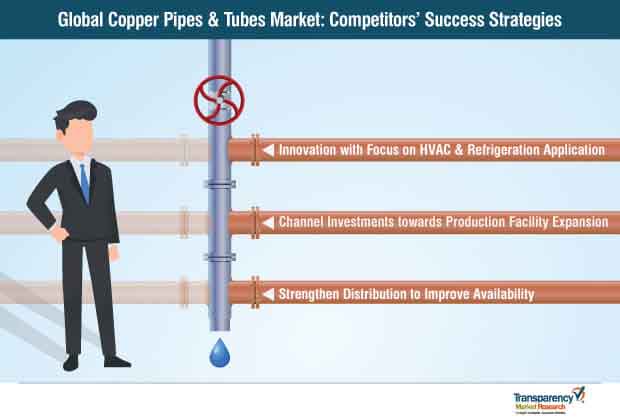 Preference for Copper over Aluminum in Air Conditioning

Condensing coils have been previously manufactured from aluminum, owing to its benefits to manufacturers in terms of high transfer properties and cost-effectiveness. However, the high maintenance costs associated with aluminum coils shifted manufacturers’ focus towards copper tubes. Repairing aluminum is impossible, resulting in the need for complete coil replacement. Moreover, the high thermal conductivity of copper, which is up to 8 times that of aluminum, further solidified their reliance on this metal.

The increasing demand for eco-friendly copper pipes & tubes, along with the demand generated from varied application sectors, has directed manufacturers’ efforts towards product innovation in terms of compact size and customization, thereby enabling them to expand their consumer reach.

Is something restraining your company’s growth in the Copper Pipes & Tubes Market? Ask for the report brochure here

Continuous depletion of natural water infrastructure and water resources has pushed the quest for a more viable solution. Copper’s reliability, durability, and long-lasting profile has made it useful in water pipe infrastructure. Its corrosion resistance over lead has resulted in significant replacement of copper in place of lead. A number of cities across Canada and the United States have already begun the process of replacing lead pipes with copper ones. The effectiveness of copper in brining clean water resources to communities, worldwide, is evident through the success of copper water infrastructure in Michigan, Milwaukee, and Toronto.

Increasing inclination towards sustainability and major emphasis given to energy efficiency are having a major influence on a number of industries. This has shifted focus towards eco-friendly and economical copper tubes that help attain greater energy efficiency, less use of material, and greater durability. Moreover, as the overall system size can be reduced by using small diameter tubes, OEMs are showing major focus on copper variants.

Growing applicability in air conditioning and refrigeration systems, plumbing purposes, and other industrial setups has propelled manufacturers to offer product customization that allows them to provide tailored copper pipes & tubes that meet specific consumer requirements. Efficient copper pipes & tubes are being designed to meet the increasing demand for the product.

Although metallic pipes has been an industry preference for years, with copper being the material-of-choice for potable water piping lines, and a typical inclination of the commercial plumbing industry towards copper pipes, the market is likely to have certain shortcomings. Market volatility impacts the prices of copper, resulting in fluctuating material expenses. With only a finite production capacity, global supply struggles to keep up with the surging demand, resulting in price hikes. With such a varying pricing scenario, alternatives are considered, thereby hampering the copper pipes & tubes market growth. 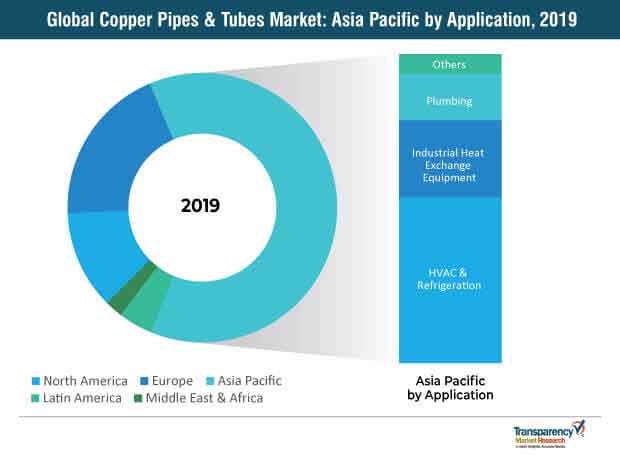 Stuck in a neck-to-neck competition with other brands? Request a custom report on competition on Copper Pipes & Tubes Market  here

The increasing demand for copper pipes & tubes for their use in HVAC and refrigeration has garnered the attention of manufacturers, owing to which, major innovations are focused at addressing HVAC and refrigeration application requirements. Leading providers of copper pipes & tubes are introducing innovative and highly-efficient solutions with thermal performance that enable optimal resource conservation.

Enhancing the international commercial network is becoming a vital aspect of the futuristic business models of leading players in the copper pipes & tubes market, in wake of its increasing demand. With strategies such as collaborations and mergers, providers of copper pipes & tubes are able to expand their geographical coverage and boost their reach in lucrative end markets.

Furukawa Electric Co., Ltd. recently established a system to increase the production of an oxygen-free copper strip with improved thermal resistance. The product was developed as a material for power module substrates and adjacent parts in automobiles, and introduced to the market in April 2017. Furukawa Electric would continue to meet the requirement for increased production, while catering to the long-term reliability requirements of customers.

Global Brass and Copper Holdings, Inc. and Wieland-Werke AG announced their definitive merger agreement. This transaction brings together two highly harmonizing companies with a diverse portfolio to serve a wide range of industries and create a unique global leadership in the red metals industry, so as to create customer value in Europe, North America, and Asia.

With a number of companies dominating the copper pipes & tubes market, the market remains fragmented in nature. As the market is unorganized and capital-intensive, it allows local manufacturers to penetrate the market. Mergers and acquisitions remain the key tactic considered by global market players in order to sustain in the competitive industry, with focus on expanding their distribution networks and catering to a broader consumer base. Several manufacturers have expanded their production capacities, owing to the surging demand for copper pipes & tubes. Another vital point of focus remains the demand generated by the construction sector, capturing the focus of manufacturers who consider strategic alliances to boost their supply of copper pipes & tubes. 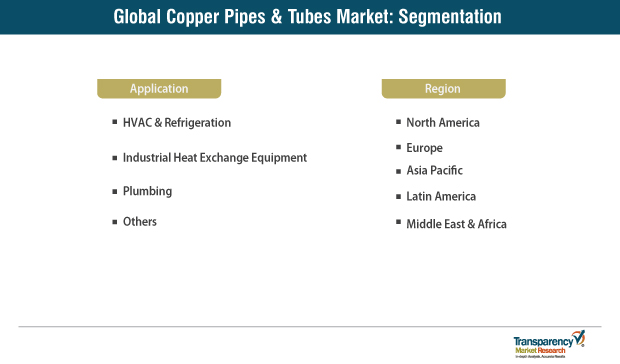 What are the Key Growth Drivers for the Copper Pipes & Tubes Market?

What are the Major Challenges for the Copper Pipes & Tubes Market?

The market is dominated by these large key players. Various other small- to medium-size players operate in the copper pipes & tubes market. The market is quite fragmented, and the presence of a large numbers of players makes the market highly competitive.

TMR’s study also includes an evaluation of the key copper pipes & tubes market dynamics that are likely to shape the future of the market in the coming years, with a detailed understanding of the key industry trends, and developments by leading copper pipes & tubes market players. The TMR report is divided into key sections that allow readers to gain a comprehensive understanding of the individual aspects of the report.

Key Questions Answered in the Report