The time period of a construction project depends on the size the of the project. The bigger the project, the longer the time for construction, which could last from a few weeks to some years. There is a lot of hard work and brainstorming needed in the construction of anything. The global construction market is likely to be influenced by the rising disposable income of the people and rapid urbanization in several countries.

Integration of Artificial Intelligence to Prevent Hazards in the Construction Industry

In order to support this influx of people in urban areas of the world, significant rise in the number of industrial, residential, and commercial projects is expected. Additionally, the significant increase in the number of general construction projects will influence the construction of civil projects, including railways, airports, roads, bridges, etc. While other industrial verticals, such as agriculture, retail, and manufacturing, among others, were quick to adopt evolving technologies, the construction market remained behind. However, at present, stakeholders are focusing toward improving productivity and saving cost by showing interest in digital technologies. 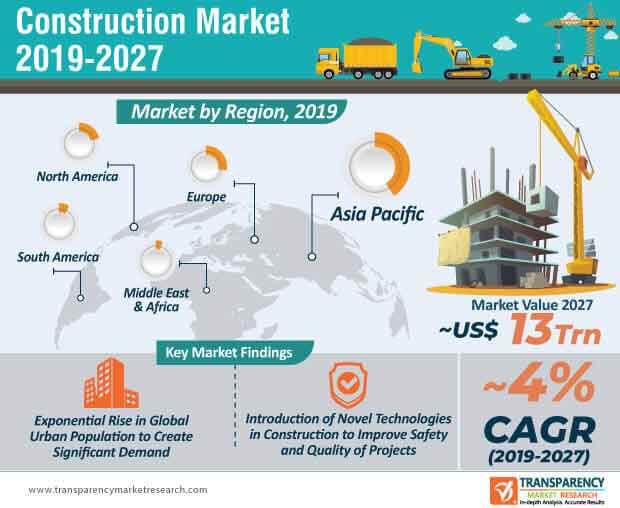 Request a sample to get extensive insights into the Construction Market

Digital technologies have played an imperative role in transforming a range of industry verticals. Over the past few decades, innovations and technological advancements have led to improved productivity levels, high sustainability, and redefined the skill sets of the labor involved. However, around the same time, within the construction market, productivity levels reached stagnation, due to high dependability on manual labor and mechanical technology, and unwillingness to change conventional business and operating models.

However, digital technologies are gradually entering the construction market, and are expected to play a key role in transforming how various real estate and infrastructure development projects are constructed, designed, maintained, and operated. Some of the new technologies that are anticipated to gain significant popularity in the near future include prefabrication, wireless sensors, building information modeling (BIM), robotics and automated equipment, and 3D printing, among others. These novel technologies are compelling stakeholders in the construction market to adopt new construction practices.

The construction market is expected to witness steady growth during the forecast period, as more number of countries are gearing up to meet the demand of the growing urban population. Furthermore, while the developed economies are showing no signs of slowing down, the developing nations across the globe are also increasingly spending on a range of construction projects.

In North America, particularly in the U.S., infrastructure development pertaining to transportation is expected to provide an impetus for growth of the construction market. For instance, a whopping ~US$ 8 Bn was allocated for the redevelopment of LaGuardia Airport - a project in which a new airport is being constructed next to the already existing airport. Adoption of latest technologies in the construction market is expected to create significant opportunities for stakeholders involved in the current market landscape. Governments across the world are increasingly spending on a range of mega construction projects. For instance, the South-North Water Transfer Project, China, has been given a staggering 48-years for its completion - a project which will enable the population in north China to gain easier access to water. Moreover, the ongoing construction of Dubailand is a whopping 278 square kilometer project, which is expected to include a number of hotels, theme parks, and recreational buildings.

While the construction market is expected to reach a value of ~US$ 9.5 Bn in 2020, labor shortages, stagnation in productivity levels, surge in prices of raw materials, and adoption of technology at a relatively lower rate could potentially pose a major challenge to the companies in the global construction market. 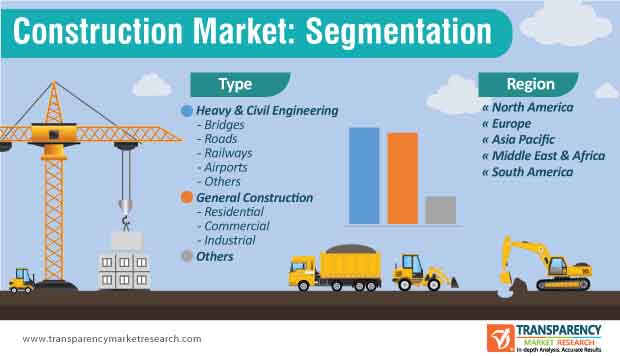 Stuck in a neck-to-neck competition with other brands? Request a custom report on Construction Market

The global construction market is projected to grow at a steady CAGR of ~5% during the forecast period. The advent of novel technologies, including artificial intelligence, focus on improving safety, exponential rise in the urban population worldwide, and entry of building information modeling (BIM), which will open new avenues for stakeholders involved in the construction market landscape. While developed regions are likely to upgrade their existing infrastructure, developing countries, including India, Indonesia, China, and Malaysia will increasingly spend resources on the construction of improved transportation networks, hydro projects, water management, etc. The integration of digital technologies will remain key to enhance safety, sustainability, the productivity of the next generation construction projects.

Construction Market – Scope of the Report

Transparency Market Research’s recent report on the global construction market, with the help of a comprehensive outlook, provides readers with an assessment of the global market landscape. This study on the construction market analyzes the scenario for the period from 2019 to 2027, wherein 2018 is the base year and 2017 and earlier is the historical data. This report enables readers to make important decisions with regard to their business, with the help of a wealth of information enclosed in the study.

This TMR study on the construction market also provides data on developments of important players and stakeholders in the market, along with a competitive analysis. The report provides an understanding of strengths, weaknesses, threats, and opportunities, along with trends and restraints in the market landscape. Presented in a clear sanctioned manner, this report on the construction market gives readers an individual understanding of the market.

This study also discusses the underlying trends and impact of various factors that are driving the construction market, along with their influence on the evolution of the market.

Key Questions Answered in This Report on Construction Market

This report answers these questions and more about the construction market aiding major stakeholders and key players in making right decisions and strategizing for the advancement of their business.

This report uses an analytical triangulation method to estimate numbers and figures of the construction market, with both bottom-up and top-down approaches.

Some of the Key Players Covered under the Scope are:

This report on the construction market provides information on the basis of type and region.