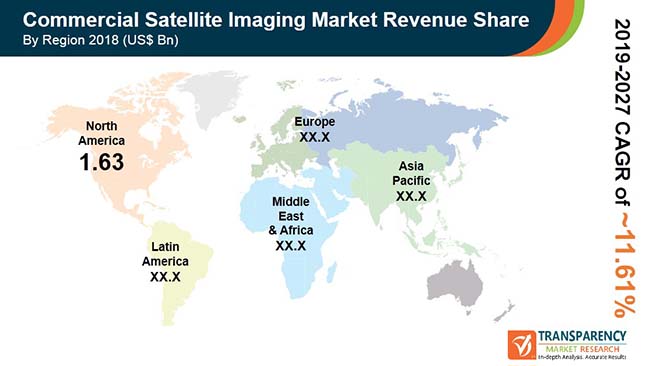 Rise in deployment of commercial satellite imaging in defense sector can be ascribed to the rise in need for advanced imaging services for staying ahead and increase in need to employ advanced technology for military research purposes.

Stuck in a neck-to-neck competition with other brands? Request a custom report on Commercial Satellite Imaging Market

In most countries, rising military and defense expenditures for the implementation of security policies are predicted to support the growth of the global commercial satellite imaging market. Given the increasing security issues, several countries, with the assistance of technological advancement, have been deploying satellites to reinforce their defense activities. The growth of this market is therefore anticipated to be stimulated by a spike in the number of satellite launches across several countries. For geospatial imaging, the defense industry often employs commercial satellite imaging, which is likely to add fillip to the market in the near future.

The military and defense uses of commercial satellite imaging have become the main end-user segment. Security and surveillance applications, which are the main functionalities of every defense organization, can be attributed to the growth of this segment in the global commercial satellite imaging market. Authorities have their satellites orbiting earth in several situations, executing many tasks. However, for the safety of many other countries, they typically have restricted access to global airspace. Governments may practice shutter control policies in some extreme circumstances, which could involve international satellites to shut down satellite imaging equipment in territorial airspace.

As per the geography, the regions covered in the report for commercial satellite imaging market are North America, Europe, Latin America, Asia Pacific, and the Middle East and Africa. Among these, North America is the leading and is estimated to dominate the market in the coming years, due to technological advancements and constant efforts made in research and development. Contribution by NASA and SpaceX in the US, have intensified the space programs. They have also improved and grown the demand for communication, navigation, and spying satellites.  Asia Pacific stands at the second position after North America in the global commercial satellite imaging market in the coming years. The increasing need for high investment for research in emerging countries may deter the market to grow and compete at the global level. However, by tailoring the vast untapped opportunity in emerging economies will lead the market to perform in an outstanding manner.

The global Industrial Automation Market has been segmented as follows: