Green building initiatives are being highly publicized in the U.S., since the buildings consume one-third of the total energy, two-thirds of the electricity, and one-eighth of the water, thus creating a tress on the resources. These initiatives are creating a demand for commercial perlite to assess the effects a building has on its site. Stakeholders in the building & construction industry are utilizing valuable information to deploy sustainable solutions throughout the life cycle of a building. 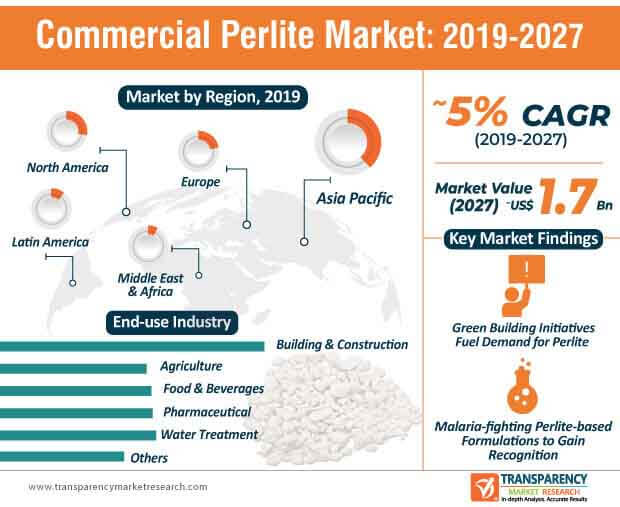 Apart from building & construction, companies in the commercial perlite market are tapping opportunities in novel formulations. For instance, leading producer of industrial minerals Imersys announced the launch of Imergard WP, a malaria-fighting perlite-based innovation that can be spray applied on walls and kills mosquitos that make contact with it. As such, companies are increasing research to develop formulations that prevent immunization of insects toward the formulation.

The global commercial perlite market is projected to reach an output of ~6,100 kilo tons by 2027. An alarming rate of individuals dying due to malaria has created a demand for innovative commercial perlite-based formulations. Thus, malaria-fighting commercial perlite-based formulations are increasingly replacing traditional chemical insecticides, since insects and mosquitos become immune to these insecticides. Companies are taking efforts to increase production capacities in order to manufacture new and efficacious performing solutions to solve major public health problems in sub Saharan Africa.

High surface area, neutral pH, and porous surface texture of expanded perlite have made it a preferred choice among stakeholders opting for storm water filtration. Likewise, the Washington State Dept. of Transportation have developed roadside media filter drains that incorporate horticulture-grade perlite, and agricultural gypsum held in place by crushed rocks to filter suspended solids and other pollutants from roadway runoff.

Perlite or Vermiculite: Which is better?

The commercial perlite market is fragmented, wherein regional and local manufacturers account for ~74% of the total market share. However, the availability of substitutes for commercial perlite poses as a challenge for both leading and emerging players. For instance, vermiculite is being highly publicized for increased water retention capacities as compared to perlite in the application of gardening in domestic and commercial settings. Hence, manufacturers are strategically marketing perlite for plants that require less water such as cacti and succulents.

Commercial perlite is growing popular for increased soil aeration in the gardening application. Thus, companies in the commercial perlite market are recommending equal ratio combination of vermiculite and perlite for gardening application. On the other hand, companies are broadening their scope for revenue opportunities through insulation applications. Expanded perlite is gaining popularity as an inexpensive and permanent method for insulating masonry walls. Manufacturers are increasing the availability of perlite for cryogenic insulation in order to store hydrogen and helium in double-walled vessels with perlite-filled annular spaces. 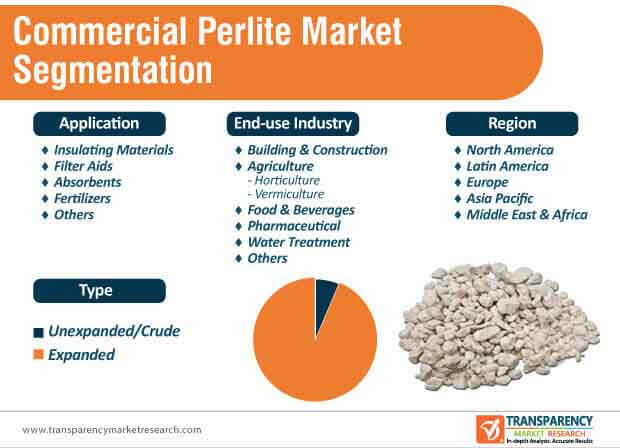 Looking for Regional Analysis or Competitive Landscape in Commercial Perlite Market, ask for a customized report

Perlite’s versatility and usefulness have a crucial role to play in green building initiatives to accommodate human habitation within limited resources. Companies in the commercial perlite market are increasing R&D to develop environmental-friendly perlite-based alternatives to plastic microbeads. The utilization of perlite is expected for exponential growth in the F&B and pharmaceutical industries.

Perlite is increasingly being used for gardening activities in domestic and commercial settings. However, substitute products such as vermiculite, expanded clay, and pumice pose as a threat to the sales of perlite. Hence, companies should target the utilization of perlite in gardening applications that cater to plants with less water needs such as succulents and cactus.

The report mentions company profiles of players that are currently dominating the global commercial perlite market, wherein various developments, expansions, and winning strategies practiced by these players have been presented in detail.

The report provides detailed information about the global commercial perlite market on the basis of comprehensive research on various factors that are playing a key role in accelerating growth of the market. Information mentioned in the report answers path-breaking questions for companies that are currently operating in the global market and are looking for innovative methods to create a unique benchmark in the global commercial perlite market so as to help them design successful strategies and make target-driven decisions.

The research methodology adopted by analysts for compiling the report on the global commercial perlite market is based on detailed primary as well as secondary research. With the help of in-depth insights of the market-affiliated information that is obtained and legitimated by market-admissible resources, analysts have offered riveting observations and authentic forecasts of the global commercial perlite market.

During the primary research phase, analysts interviewed market stakeholders, investors, brand managers, vice presidents, and sales and marketing managers. On the basis of data obtained through interviews of genuine resources, analysts have emphasized the changing scenario of the global commercial perlite market.