The increasing government initiatives are growing awareness regarding benefits of clostridium vaccine among consumers. Clostridium vaccines are used to provide immunity against for a variety of ovine and bovine clostridial diseases such as tetanus, black disease, pulpy kidney (enterotoxaemia), and blackleg. The increased awareness pertaining to zoonotic diseases and the rising incidence rate of clostridium family diseases are boosting the demand for clostridium vaccine globally. In developing countries, distribution of these vaccines are mainly dependent of government intervention. Whereas, in developed nations, the distribution is dependent upon veterinary hospitals and veterinary clinics. To prevent zoonotic diseases and loss of animals, governments, veterinary hospitals, and veterinary clinics are persistently commencing awareness programs. 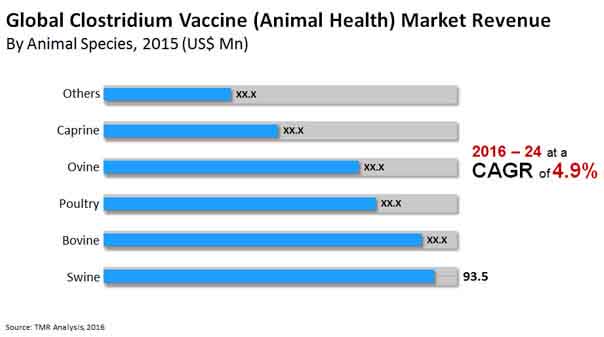 Large Demand of Pork to Boost the Growth of Swine Segment

The global market for clostridium vaccine can be segmented on the basis of animal species into poultry, swine, caprine, ovine, and bovine. Among these, the swine segment is expected to provide most attractive opportunities for the market growth owing to large demand of pork. Furthermore, the segment is expected to expand with a significant pace due to high possibility of swine getting diagnosed with zoonotic diseases.

However, over the forecast period, the ovine segment is anticipated to project the fastest rate of growth. The increasing prevalence of diseases such as black quarter, black diseases, and blackleg are propelling growth of this sector. Furthermore, government regulations in various geographies, growing awareness among owners, and the massive increase in the world's ovine population are envisioned to surge the demand for this segment over the forecast period.

On the basis of distribution Channel, the market for clostridium vaccine can be bifurcated into retail pharmacy, veterinary research institute, veterinary hospital, and veterinary clinic. Among these, due to technological advancements and development of overall retail industry, retail pharmacy segment is foreseen to expand with an uninterrupted growth rate. In Asia Pacific, the veterinary clinic segment holds a dominant position in the market owing to augmenting government awareness pertained to clostridium diseases and their prevention, across several countries over the region.

On the basis of geography, the clostridium vaccine (animal health) market can be divided into five key regions, namely Middle East and Africa, Latin America, Asia Pacific, Europe, and North America. OF these, the North America segment is expected to grow with a noteworthy rate due to increasing awareness among customers. The increasing demand for meat products and the decreasing arable land are other factors leading to the growth of the market within this region. The developing region, Asia Pacific is also foreseen to provide lucrative growth opportunities owing to the increased government initiatives. The increasing population of countries such as China and India are demanding for meat products. Furthermore, the rising prevalence of clostridial diseases over these countries are most likely to generate high demand for clostridium vaccines, further assisting the expansion of the global market.

This report on the clostridium vaccine (animal health) market studies the current as well as future prospects of the market globally. Health concern related to life threatening diseases are the major concerns in the developed and developing nations.

This research report provides a detailed analysis of the clostridium vaccine (animal health) market and helps understand the various driving factors for the growth of the market. The market overview section analyzes market dynamics and trends such as drivers, restraints and opportunities that influence the current nature and future status of the market. Porter’s five forces analysis has been covered in terms of bargaining power of buyers and suppliers, threat of new entrants and substitutes, and competitive rivalry in the global clostridium vaccine (animal health) market. Market dynamics factors such as market attractiveness analysis have also been explained in order to deliver a thorough analysis of the overall competitive scenario of the global clostridium vaccine (animal health) market.

Geographically, the clostridium vaccine (animal health) market has been segmented into five major regions: North America, Europe, Asia Pacific, Latin America and Middle East and Africa. The market size and forecast for each of these regions have been provided for the period from 2016 to 2024, along with CAGR (%) for the forecast period from 2016 to 2024. The research study also incorporates the competitive scenario in these regions.