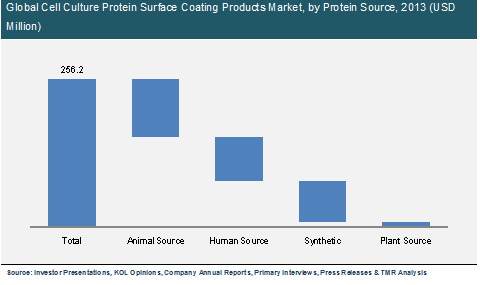 Cell culture is the process wherein cells are grown under controlled conditions outside its natural environment for  studying the cellular structure and functions, for developing model systems for research, for genetic engineering, stem cell research, and drug discovery. Thus, there Is a huge scope of growth for cell culture on account of its growing number of applications. This in turn has fueled the use of surfaces which are coated with protein, as protein coated surfaces provide enhanced nutrition,  enabling better growth of the cells as well as excellent adhesion. Investments are done extensively by both the Market players as well as governments, for stem cell research and drug development activities. This in turn is boosting the demand for cell culture protein surface coatings. Today, stem cells have diverse applications including development of artificial tissue and bone graft which in turn is expected to aid the growth of the cell culture protein surface coatings market during the forecast period.

In terms of different types of coatings such as self coating and pre-coating, it is estimated the self coating segment will continue to hold a dominating status within the market on account of its large application in 2D and 3D cell cultures. The pre-coating segment will witness the fastest expansion during the forecast period on account of the rising popularity of micro well and multi-well plates for in vitro applications.

On the basis of geography, the global cell culture protein surface coatings market is segmented into North America, Asia Pacific, Europe, and the Rest of the World. Of these, Asia Pacific is anticipated to be the fastest expanding regional market for cell culture protein surface coatings on account of the burgeoning biotechnology industry and relatively less stringent regulations for biologics development. Asia Pacific has wide untapped opportunities which will work in its favor. An increasing shift of market players to this region, increasing number of drug discovery activities, and improving biotechnology infrastructure will boost the market in Asia Pacific.

North America has been leading in the market and is expected to continue to do so throughout the forecast period on account of the presence of several big bio-pharmaceutical companies as well as advanced healthcare infrastructure. In Europe and North America the use of advanced tools for cell culture as well as increasing number of large-scale stem cell research activities are the two important factors behind the growth of the cell-culture protein surface coatings market in these regions.