Discussing substantial vessels, cast iron pots are a definitive workhorse for the kitchen and their adaptability has definitely no match. You may use it on the stove top or the broiler or even in ovens, to get delectable nourishment. The major benefit of cast iron is it has high temperature limit, which infers that once it's hot, the pot holds the warmth for a more drawn out period. This is perfect for cuisines which require slow cooking. Looking at the massive adoption of cast iron cookware across the globe the cast iron cookware market shall grow significantly in coming years.

The global cast iron cookware market is, however, currently restrained by increasing market competition, availability of alternative products, and the fact that cast iron cookware is not recommended for use on glass cooktops. It is also difficult to cook acidic foods in cast iron cookware as acid reacts with the metal and brings about a change in the food color, making it somewhat darker. The reaction can also cause some of the iron to leach out into the food, which can alter the taste of the food slightly. The potential health risk is low, but it can make the food taste metallic.

According to the report, the global cast iron cookware market is estimated to be valued at roughly US$2,537.0 mn by the end of 2017 and is expected to expand at a CAGR of 3.4% over the forecast period. 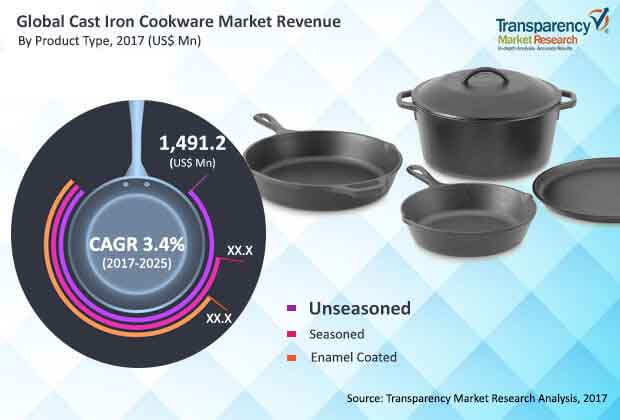 By product type, the cast iron cookware market is segmented into unseasoned, seasoned, and enamel coated. The unseasoned cast iron cookware segment is likely to be the most attractive segment in the forecast period owing to its natural non-stick feature when seasoned property with oil. On the basis of end user, the cast iron cookware market can be segmented into households and food services. The food services segment is estimated to account for a significant revenue share of 67.6% in 2017 and is likely to remain the leading segment during the forecast period as well.

Geographically, the market in APAC and Europe is expected to dominate over the forecast period followed by North America. Collectively, the APAC and Europe markets are likely to account for over 62% of the overall cast iron cookware market by the end of 2025. The consumer base for cast iron cookware has expanded at a promising pace in APAC in the past few years as the consumer is increasingly becoming aware of the potential health hazards associated with non-stick and aluminum cookware.

With the increased inclination towards cast iron cookware as a better alternative to electric and non-stick cookware, the market in Asia Pacific is expected to become a prominent driving force for the global market by the end of the forecast period. The market in Europe and North America is likely to expand owing to the vast rise in the number of single-person households and the well-established e-commerce industry.

In addition, it is imperative to note that in an ever-fluctuating global economy, we not only conduct forecasts in terms of CAGR, but also analyze on the basis of key parameters such as year-on-year (Y-o-Y) growth to understand the predictability of the market and to identify the right opportunities.

Also, another key feature of this report is the analysis of all key segments in terms of absolute dollar. This is traditionally overlooked while forecasting the market. However, absolute dollar opportunity is critical in assessing the level of opportunity that a provider can look to achieve, as well as to identify potential resources from a sales and delivery perspective in the global cast iron cookware market.