Health advantages of veganism are increasingly catching the attention of pro-health consumers. Hence, stakeholders in the cashew milk market are tapping opportunities in dairy goods to meet consumer requirements. For instance, New York-based restaurant chain 16 Handles, announced the launch of their new line of vegan soft serve flavors, including their latest cashew milk-based flavor, made from proprietary recipes and natural ingredients. Stakeholders are increasing efforts to strike the right balance between health and indulgence to meet niche requirements of consumers.

As a result of collaborations, the cashew milk market is currently valued at ~US$ 91 Mn and is estimated to surpass the ~US$ 193 Mn by the end of 2029. Stakeholders are adopting strategies to create a demand for ‘limited-time-only’ cashew milk-based bakery items, such as vegan chocolate chip cookie dough toppings. Another driver that is triggering the growth of the cashew milk market is high prevalence of lactose-intolerant consumers.

Several drivers such as the emergence of plant-based foods is helping to contribute toward market growth. Likewise, cashew milk is being highly publicized as a plant-based beverage rich in calcium. Its low fat and low in sugar attributes are catching the attention of consumers. Companies in the cashew milk market are gaining prominence in the F&B sector, since cashew milk is gradually replacing conventional dairy milk among several consumers. Thus, companies are capitalizing on this trend and are developing cashew milk that is gluten free. For instance, Sanitarium-a health and wellbeing company, excels in the production of cashew milk, which is gluten and cholesterol free.

Cashew milk is expensive on the pocket of consumers, as compared to conventional dairy milk. Hence, companies in the cashew milk market are increasing production capabilities to produce cashew nut milk powder so that consumers need not throw away cashew milk, since milk has a much shorter shelf life.

Plant-based dairy and convenience foods are being highly publicized at various food events. For instance, plant-based cheese maker, Parmela Creamery, revealed its traditionally cultured and age-processed cheese made from cashew milk at the 2019 Natural Products Expo East event. Companies in the cashew milk market are expanding their product portfolio in smoky spreads and familiar flavors of cheddar and Havarti cheese. 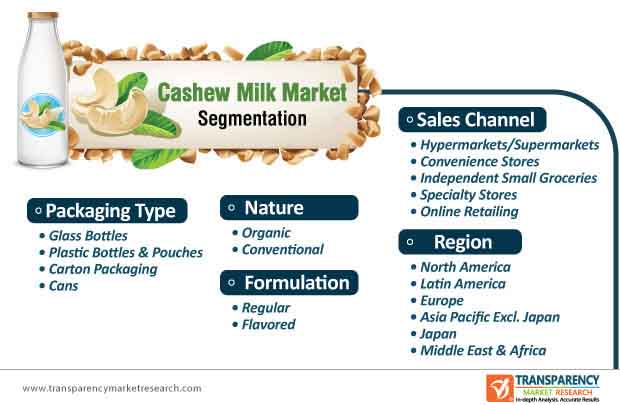 Stuck in a neck-to-neck competition with other brands? Request a custom report on Cashew Milk Market

The cashew milk market is projected to grow at a healthy CAGR of 7% during the forecast period. This indicates that consumers are inclining toward foods with cashew flavor. Likewise, companies are increasing production capabilities to produce cashew milk powders in vanilla and chocolate flavors. Nut milks are growing popular in Brazil.

Cashew milk is being highly publicized for its nutritional value such as high calcium and low fat attributes. However, cashew milk has a short shelf life. Hence, companies are increasing R&D and are producing soluble cashew milk powders with extended shelf life to cater to the needs of consumers and reduce issues of food wastage.

Key indicators of market growth, which include year-on-year (Y-o-Y) growth of the market, value chain, supply chain analysis, and compounded annual growth rate (CAGR) are explained in the TMR’s study in a comprehensive manner. This information can help readers understand the quantitative growth prospects of the cashew milk market during the forecast period.

The study also includes statistics and facts related to the macro and microeconomic factors that are impacting developments in the market. It also offers actionable insights into the market based on the future trends in the cashew milk market. Furthermore, small businesses and new entrants in the cashew milk market too can make use of the information presented in this study, based on which, they can make appropriate business decisions in order to gain momentum in the market.

Secondary resources referred to by analysts during the production of the cashew milk market study include statistics from governmental organizations, trade journals, white papers, and internal and external proprietary databases. Analysts have interviewed senior managers, product portfolio managers, CEOs, VPs, marketing/product managers, and market intelligence managers, who contributed to the development of this report as a primary resource.

The report categorizes the cashew milk in terms of various segments - formulation, nature, packaging type, sales channel, and region. This report offers comprehensive data and information about the important market dynamics and growth parameters associated with these categories.