The demand in the global cardiac rehabilitation market is estimated to increment at a significant CAGR of 5.4% during the forecast period of 2016 to 2024, gaining traction from a number a factors, such as rise in geriatric population, growing burden of cardiovascular diseases, and increase in global initiatives regarding the awareness for cardiovascular diseases. On the other hand, the lack of skilled personnel and high cost of initiative investment are a few hindrances faced by the global cardiac rehabilitation market. The prosperity of this market in the near future is also attributed to high growth opportunities in the region of Asia Pacific, which houses nearly the half of the world’s population and includes two of the fastest growing economies in India and China.

As per the projections of the report, the global cardiac rehabilitation market will be worth US$1,622.9 mn by the end of 2024, considerably up from its evaluated worth of US$1,010.93 mn in 2015. Changing lifestyle among the urban population, which now includes minimal physical workout and ill-timed poor quality eating, is another factors augmenting the cases of cardiovascular diseases, which in turn will favor the vendors operating in the global cardiac rehabilitation market. 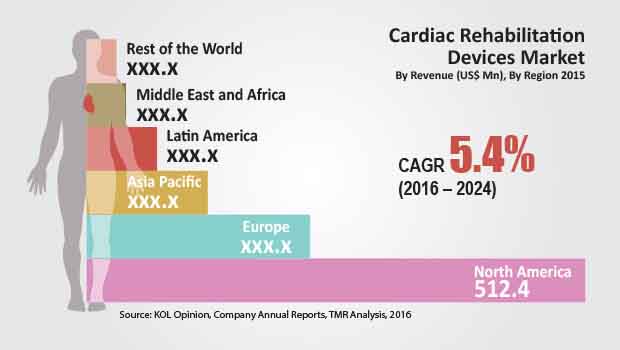 On the basis of device type, the global cardiac rehabilitation market is segmented into seated and upright elliptical trainer, stationary bicycle, stabilization ball, rower, treadmill, blood pressure monitor, and heart rate monitor. Among these, the elliptical trainer segment is the most profitable, accounting for nearly 27% of the overall demand, which is a reflection of its diverse benefits as it can mimic climbing stairs and helps the patients in cardio fitness. As per a study by the National Center for Biotechnology Information, elliptical trainers are significantly more helpful than walking on treadmill or ground as well as cycling, and the demand for seated and upright models are expected to remain in-demand throughout the forecast period, during which the report expects the segment to increment at a CAGR of 6.0%. On the other hand, heart rate monitors segment is also gaining demand, owing to technological advancements, reliability of the outputs, and portability.

Owing to high percentage of disposable income, robust healthcare infrastructure, and adoptability of new technology, North America with developed countries such as the U.S. and Canada is currently the most profitable region as far as the market for cardiac rehabilitation market is concerned. In 2014, North America served 50% of the demand in the global cardiac rehabilitation market. However, emerging economies such as India and China, which resides a vast population base, are expected to turn Asia Pacific as a highly lucrative region in the near future, followed by Europe, and Latin America. Asia Pacific, in particular, has been projected to increment the demand at a CAGR of 6.8% during the forecast period of 2016 to 2024.

The global cardiac rehabilitation market is highly consolidated with Brunswick Corporation and Technogym accounting for more than the half of the shares in 2015. Some of the other key vendors in this market identified by the report are Johnson health Tech Co., Brunswick Corporation, and Amer Sports. In the near future, new product development and geographical expansion are expected to be two most important strategies by these leading vendors to increment their consumer base.

One of the significant drivers of growth of the global Cardiac Rehabilitation Market is the increasing incidences of various lifestyle diseases such as hyperlipidemia, obesity, and cardiovascular diseases. Another significant driver of the said market is the advent of various technological breakthroughs like tele-cardiac rehabilitation. These innovations refer to services provided over the internet utilizing telecommunications and information technology.  Furthermore, the expansion of the global cardiac rehabilitation market is being fuelled by a rise in the number of health-conscious individuals. Supportive reimbursement systems, like Center for Medicare and Medicaid Services' incentive payment model and the Million Hearts initiative are also expected to drive the development of the market in the near future.

North America is estimated to dominate the global cardiac rehabilitation market. The region is expected to account for a significant chunk of the market revenue. Because of its huge population and evolving lifestyle, the US is likely to add a substantial chunk of North America's cardiovascular disease burden. Heart disorders, such as coronary heart disease, stroke, and hypertension are thought to be the leading cause of death in the US, which is likely to augur well for the regional market in the years to come.

Patients with heart conditions make use of cardiac therapy devices. Elliptical trainers, rowers, treadmills, stabilization balls, and heart rate monitors are only a few of the cardiac therapy products available in the market. These therapy devices support patients in reducing their likelihood of heart attacks and other cardiovascular problems. Exercise, weight control, diabetes, hypertension, dietary counseling, physical activity counseling, psychosocial interventions, and counseling sessions are only a few of the practices that can assist with disease monitoring.

The global cardiac rehabilitation market is expected to rise due to decreased dependence on medicines for disease care, increased understanding of health and quality of life, and increasing demand for tele-cardiac rehabilitation. In the coming years, the technological innovations and expanding base of geriatric population are likely to create new business opportunities for this market.