The global brachytherapy devices market is estimated to record a staggering growth rate in the forecast period of 2018-2026. Brachytherapy is a treatment type in which low-level radiation is penetrated on a specific part of the body to cure it of a specific cancer type such as breast cancer, prostate cancer, skin cancer, and cervical cancer. It is an efficient treatment for curing tumors. Furthermore, it prevents the reoccurrence of the disease and is also cost-effective.

The global brachytherapy devices market is driven by increase in incidence of cancer, high prevalence of cervical & lung cancer in developing regions, developed health care infrastructure, rise in demand for brachytherapy treatment, supportive government initiatives, and high acceptance of minimal invasive surgeries. However, higher reimbursement rates of other advanced radiation therapies, such as, IMRT and proton therapy and increase in demand for robotic prostatectomies are restraining the global brachytherapy devices market. 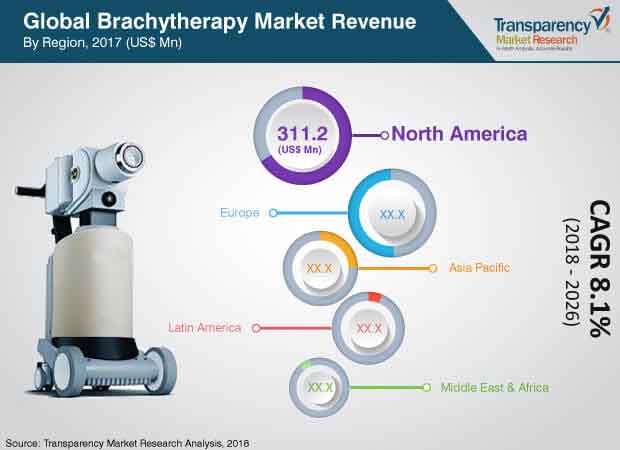 The brachytherapy applicators segment is estimated to expand at a CAGR of 8.4% and account for the dominant share of the  brachytherapy devices market during the forecast period. This therapy plays a pivotal role in cancer care treatment as they are more efficient and are used for patient navigation through cancer care continuum. Rise in investment in research & development on cancer also paves the way for the increasing demand for the therapy. Cervical cancer, being the fourth common type of cancer in women, affects 500,000 women every year globally. It is the largest growing market for brachytherapy, followed by prostate cancer, breast cancer, skin cancer, and others. Hospitals are the major customers of brachytherapy products as they have better reimbursement plans and advanced technology systems, followed by cancer treatment centers, and others.

The global brachytherapy devices market report comprises an elaborate executive summary, including a snapshot that provides information on various segments of the market. It also provides information and data analysis of the global market with respect to segments based on product, dose rate, indication, end-user, and region. A detailed qualitative analysis of drivers, restraints, and opportunities of the market has been provided in the market overview section. Additionally, the section comprises competitive matrix and profiles of key market players, along with business overview, to project the competitive landscape of the market. The section also provides market attractiveness analysis based on region and market share analysis in terms of key players, thereby presenting a thorough analysis of the overall competitive scenario in the global brachytherapy devices market.

In terms of region, the global brachytherapy devices market has been segmented into five major regions: North America (the U.S. and Canada), Europe (the U.K., Germany, France, Spain, Italy, and Rest of Europe), Asia Pacific (India, China, Japan, Australia & New Zealand, and Rest of Asia Pacific), Latin America (Brazil, Mexico, and Rest of Latin America), and Middle East & Africa (South Africa, GCC Countries, and Rest of Middle East & Africa). Market size and forecast for each of these regions and the mentioned countries have been provided for the period 2018 to 2026, along with their respective CAGR for the forecast period 2016 to 2026, considering 2017 as the base year. The research study also covers the competitive scenario in these regions.

Companies mentioned in the Report

The global brachytherapy devices market has been segmented as below: