Increasing impact of unfavorable farming conditions on the global agricultural production has weighed down the production of food items and beverages. To avoid famines and starvation, farmers are partnering with leading agricultural research organizations and adopting biological seed treatment options. From insects and insecticides to rare plant diseases, biological seed treatment is witnessing higher adoption for its advantage in enabling the crop to fight such deterrents. In addition, proliferation of sustainable agricultural practices has driven the adoption of biological seed treatment, particularly among government-controlled farming communities. Farmers are demand an early evaluation of field performance to understand the treatment specification of their crop profile. 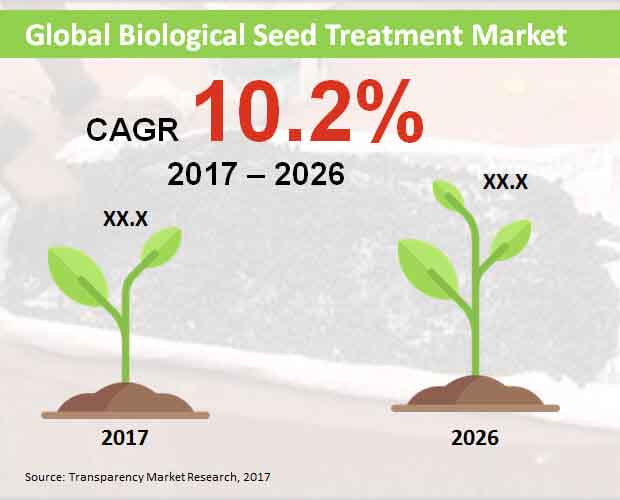 Demand for Biological Seed Treatment against Bacteria to Register an Upsurge

In 2018 and beyond, corn will remain a key type of crop in the global biological seed treatment market. Biological treatment of corn seeds is expected to bring in more than US$ 305 Mn revenues by the end of 2026. Extensive use of corn in production of multiple food products is expected to drive its demand during the forecast period. The report also reveals that biological seed treatment of cash crops such as cotton will be highly prioritized by market players in order to reap high profit growth. The report also reveals that by the end of 2026, majority of biological seed treatments will serve the function of biostimulants, raking in revenues worth nearly US$ 240 Mn from around the world.

As a result of improved understanding of their efficacy and increasing concern about the health and environmental risks linked with traditional chemicals, the demand for biological seed treatment has risen exponentially. Chemical seed treatments are harmful for the ecosystem and place pollinators at risk, which is likely to open up new avenues of growth for the global biological seed treatment market in the years to come. Honeybees are extremely sensitive to the neonicotinoid class of insecticides. In contrast to synthetic chemicals, microorganisms utilized as active ingredients in pest control are commonly considered to be healthy for the environment and non-target species.

Bio-priming refers to a biological seed treatment process that involves hydration of the seed as well as microbe inoculation. Microbial inoculants, such as plant growth-promoting rhizo-microorganisms (fungi or bacteria), are utilized to bio-prime seeds in most cases. It's an ecological approach that makes use of selected microorganisms to boost growth of plants by shielding seedlings/plants from soil/seed-borne pathogenic organisms, improving nutrient uptake, and generating plant growth-promoting compounds. Chemicals that are used for treatment of seeds mainly function as contact fungicides and are unable to safeguard plants from foliar pathogens during the later phases of crop development, so the usage of such techniques is on the rise.

Advancements in farming technology has led to the utilization of biologicals in a variety of methods for treating seeds and crop grains. Foliar sprays are being used to coat seeds, and such a biological treatment of seeds is aimed to protect them from external factors such as pest infestation, harsh weather and plant diseases. Uncontrollable growth in global population will continue to elevate food consumption levels, compelling farmers from several parts of the world to adopt biological seed treatment options. The key role of biological seed treatments in enhancing the crop efficiency will drive their adoption in the coming years. Farmers will be adopting biological seed treatment to protect their farm produce from diseases and pests, and extend the overall farmland productivity.

Consumer-side and supplier-side research approach has been employed in development of this research. Insights from trade analysts and qualitative data procured through desk research has helped in creating a roadmap of how the global biological seed treatment market will evolve during the assessment period. Statistical forecasting methods have been incorporated to develop accurate market size forecasts. The report has interpreted this data from a variety of sources and through multicultural standpoints. Social, cultural, economic, and psychological influences affecting the adoption of biological seed treatment have been identified and studied. Consumer survey information from authentic databases has been procured to connect their association with the forecasted market size estimations.

Leading companies partaking in the global biological seed treatment market have been profiled in the report. Each player has been studied on the basis of their current market standings and strategic developments. From advancements in introducing multi-functional biological seed treatments to production of new treatment alternatives, the report has assessed several aspects encompassing the global biological seed treatment competition landscape. Inferences provided in the report are aimed at improving the understanding of market players, and helping them plant their next steps towards future market direction. Insights provided on competitor analysis are completely unbiased and validated through multiple levels of quality checks. The key scope of this report is to extend the abilities of these companies in improving their business growth in the near future.