The functional beverage industry continues to grow annually. With an increased focus towards health and wellness, beverage ingredients play a vital role. Baobab ingredient beverages are expected to increase during the forecast period, as consumers are desiring nutritional drinks with high nutrition value, without added artificial ingredients or other sugars. Further, there’s a lot of innovation in the healthy beverage space with baobab ingredients, with new product launches focused on functional and value-added drinks. 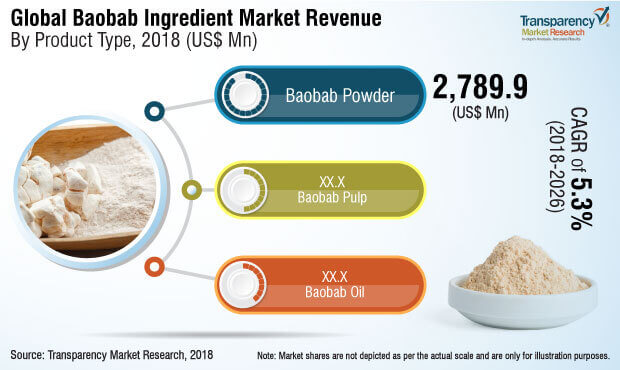 The demand for baobab ingredients is inevitable, and the baobab tree is known as the ‘tree of life’, which consists of high amounts of vitamin C found in baobab fruits. Baobab ingredients contain essential minerals, energetic fiber, and antioxidants, which helps in boosting energy levels; aids with liver detoxification, cleansing, and detoxifying; reduces anxiety; improves the immunity system; and exhibits anti-aging properties.

Beverages or products of baobab ingredients that taste similar to the key ingredients are trending, and companies are responding by simplifying flavor profiles. Consumers are demanding baobab ingredient-based products whose flavors are authentic and taste true to nature due to the preference for fresh and aromatic components, as the pulp of the fruit is used in baking as a milk-curdling agent, as a flavoring for yogurt and ice cream, and as a source of calcium for pregnant and lactating women which is boosting the demand for baobab ingredient in the market.

Changing consumer preferences, tastes, and eating and purchasing habits, as well other factors may hamper the growth of the baobab ingredient market, affecting the sector, including new market entrants and demographic changes.

The demand within the global baobab ingredient market is a function of advancements in organic food manufacturing. The applications of baobab in the medical and food industries have boded well for the growth of the global baobab ingredients market. There is little contention about the use of citric flavoured fruits and vegetables in the domain of medicine and food manufacturing. Moreover, the food industry makes ardent efforts to ensure that several new recipes are explored and discovered by mixing and mashing several fruits and vegetables together. This quest of the industry towards conducting continuous food research has brought baobab ingredients under the spotlight of attention.

In addition, it is imperative to note that, in an ever-fluctuating global economy, we not only conduct forecasts in terms of CAGR, but also analyze on the basis of key parameters, such as year-on-year (Y-o-Y) growth, to understand the predictability of the baobab ingredient market and to identify the right opportunities.