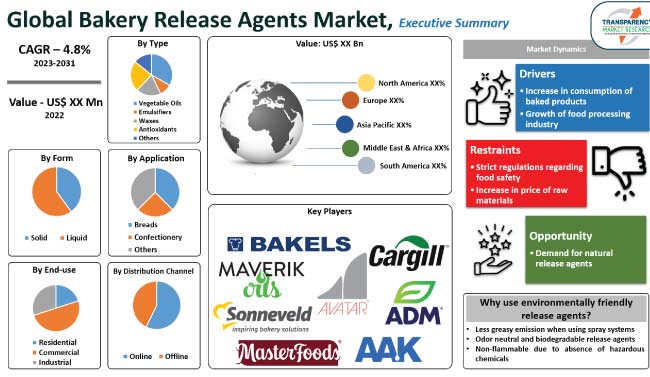 Release agents are an integral part of many manufacturing processes. These products are usually used to prevent cakes or other baked products from sticking to their containers. Along with this, specialty release agents can enhance productivity, extend tool/die/mold life, increase cycle times, improve surface quality, and reduce scrap and defect rates.This value added purpose of release agents has resulted in increased use of bakery release agents in the bakery industry.

Countries in Asia such as China and India have a large number of unorganized local bakery release agent manufacturers. Global manufacturers are focusing on entering emerging countries such as India, Japan, and China. However, the presence of a large number of regulatory policies prevailing in the market are projected to create a hindrance to the entry of new bakery release agent suppliers in these emerging markets. Presence of relatively fewer suppliers of release agents is causing vendors to offer products at rather higher prices. Vertical integration has many benefits for the bakery industry. Vertical integration improves the coordination of the supply chain for both small and large firms. Small firms are able to manufacture and sell their products at wholesale prices, while large firms find it easy to invest in extensive distribution networks with retail outlets. In addition, large firms such as ADM, Cargill, and AAK AB are able to gain access to downstream markets that greatly increase their sales. Vertical integration also helps in synchronizing supply and demand of bakery release agents. Also, the market is largely affected by the global food consumption patterns that are changing due to population growth and economic development. As people buy more food in supermarkets, their food preference changes from more traditional foods to processed foods. Such shifts place increased pressure on bakery products, confectionery, meat, and other products. Also, new product inventions and introductions from companies have made it easier for bakery product manufacturers to increase their value chain results

The growing consumption of bakery products among a large number of regions will prove to be a prominent growth-generating factor for the bakery release agents market during the forecast period of 2018-2026. The emergence of bakery release agents as a prominent part of the baking process will bring good growth opportunities across the forecast period of 2018-2026.

The bakery release agents market has been provided in (US$ Mn) in terms of revenue and (Thousand Tonnes) in terms of volume as well as the CAGR (%) for the forecast period 2018 to 2026. The bakery release agents market is a global report studied on the basis of form, product type, end-use, ingredients, and region. Additionally, under the regional sections, the price trend has been incorporated to ascertain the regional impact of the same. The incremental opportunity analysis has been figured out in order to determine the most attractive segment in the upcoming years.

The report also highlights the competitive landscape of the bakery release agents market, thereby positioning all the major players according to their geographic presence and recent key developments. The comprehensive bakery release agents market estimates are the result of our in-depth secondary research, primary interviews, and in-house expert panel reviews. These market estimates have been analyzed by taking into account the impact of different political, social, economic, technological, and legal factors along with the current market dynamics affecting the bakery release agentsmarket’s growth. Besides, competition matrix and market share analysis have been included under the competitive landscape to understand the top players’ contribution in the bakery release agents market. Each company is studied on the basis of basic information, financial highlights, revenue highlights of regional contribution and segment contribution, and product portfolio. Additionally, the company strategy and recent developments if any are also incorporated under each company profile section.

The bakery release agents market is segmented as below.