The global automotive sunroof market is currently being driven by the rising consumer demand for safety and comfort. Increasing disposable incomes are allowing a greater number of consumers to afford high-end luxury cars, while technological advancements in architecture and materials is allowing lower range cars to be optionally fitted with quality sunroofs. Both factors are likely to provide a substantial impetus to the global automotive sunroof market over the coming years. The global automotive sunroof market is also being propelled by the increasing development of passenger cars in general. However, the market is currently being stifled by utility issues such as the crushing of sunroofs during accidents or due to manufacturing defects. The installation of sunroofs also increases the overall maintenance cost of a car, making it an unwanted feature for low-end car buyers. 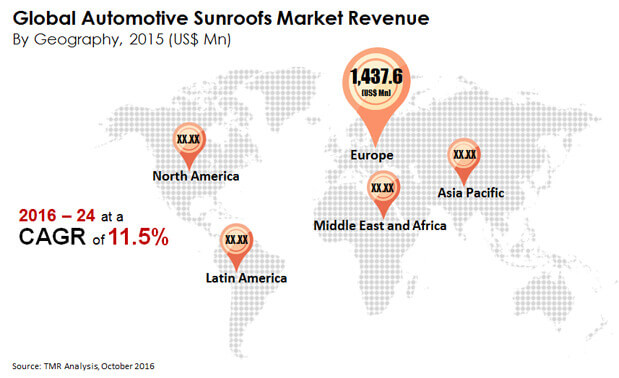 The automotive sunroofs market across the globe is currently driven by its exceptionally high volume of demand in the European region. Europe also holds a high potential demand for premium vehicles and along with increasing consumer’s demand for comfort systems, the adoption of sunroofs in all passenger vehicles has increased over the forecast period in Europe. Glass sunroofs are adopted in approximately 60% of the vehicles using sunroof systems in Europe.

Asia Pacific occupies the second position in terms of demand in the global automotive sunroof market, after Europe. A majority of the car buyers as well as manufacturers treat sunroofs as an after-sales market in Asia Pacific, allowing a massive scope of entry for all levels of players in this region. The complementing growth of the automobile sector in Asia Pacific is expected to further drive the market for sunroofs in India, China, and Japan. Governments from Asia Pacific, MEA, and Latin America are providing incentives to environment friendly industries, of which the global automotive sunroof market can be a part of. This has in turn helped in draw in huge investments from leading global companies of automotive sunroofs providers for setting up new facility manufacturing units in these regions.

Based on material types, in terms of revenue, the global automotive sunroofs market was primarily driven by glass sunroofs with the leading market share in 2015 and is also expected to hold the top market share over the forecast share. Glass is a commonly used material in the manufacturing of sunroofs. Glass sunroofs are preferred by consumers since they offer better transparency, along with an open and spacious atmosphere. The market for fiber sunroofs will experience declining growth owing to the decline in demand for convertible tops. With growing lightweight and fuel efficiency trends, carbon fibers and polymers are also gaining popularity. In the glass sunroof type market segment, the in-built glass sunroof sub-segment occupies the leading market share. Pop-up, tilt and slide, panoramic, top-mount, foldable, and removable sunroofs are the most commonly available varieties. Solar sunroofs are the new entrant and the energy from the photovoltaic cells of the solar sunroofs are now being used to power the vehicle’s climate control systems.

The automotive sunroofs market is anticipated to grow at a significant pace over the forecast period of 2016-2024. An automotive sunroof can be defined as a fixed or operable opening in the vehicle roof that permits the entry of light and air into the vehicle. The sunroofs are available in various shapes and styles and they are either motor driven or manually operated. The Nash Company was the first company to offer sunroofs in vehicles as a standard option. They were first introduced in wagons, SUVs, and Sedans. Sunroofs are also sometimes marketed as moonroofs which are characterized by a tinted glass. Majority of the moonroof systems are electrically operated and either have combination pop-up/spoiler configuration or a pop-up/in-built configuration. A wide variety of sunroofs and moonroofs have become common in both after-market and factory-installed offerings, thereby creating a diverse range of choices and features.

In recent years, various automobile manufacturers have been offering either built-in or optional sunroof systems to mid or premium segment cars. Automobile sunroof market is becoming highly competitive with major technological innovations and breakthorughs in the leakage problems that turns out to be one of the major issues in sunroof openings. With the growing demand for comfort and safety systems in vehicles, the demand for sunroofs in automotive vehicles has increased significantly. Sunroofs provide better air circulation within vehicles and also offer superior brightness and illumination during daytime, which in turn increases the comfort level of the passengers. OEMs have also started offering built-in or optional sunroof systems to mid segment cars in addition to luxury or premium vehicles. For instance, Hyundai has extensively introduced the optional sunroof systems in their hatchback version of i10. Due to rapid economic improvement, growth in GDP, reduced inflation rate and downward trend in fuel prices, there is huge demand for premium vehicles globally. Growth in production of these vehicles in developing countries of Asia Pacific is mainly characterized by increasing domestic consumption, rise in disposable income, low ownership rates and presence of cheap labor in India and China among others. Moreover, recovery of macro-economic conditions in developed countries of North America and Europe post economic recession in 2010 is another factor responsible for the growth of the premium car segment. These factors are largely responsible for the expansion of the sunroof market as the growth of the sunroof systems is directly related to the advancement of the passenger vehicle segment.

High maintenance cost, incidences of crushing and shattering of sunroofs are some of the major restraining factors of this market. Moreover, the sunroof systems have holes and drains that can cause water clogging and leakage into the vehicle. This requires frequent maintenance and thus adds up to the maintenance cost.

The global automotive sunroofs market has been segmented based on material type, glass sunroof and fiber sunroof. The glass sunroof type market has been further segmented into in-built, tilt and slide, panoramic, top-mount, pop-up, and solar glass sunroofs. The fiber sunroof type market has also been further segmented into foldable and removable fiber sunroofs. Glass is the most popular material employed for manufacturing sunroofs. Glass sunroofs offer better transparency, and an open and spacious atmosphere, resulting in high consumer interests in them and higher demand in the glass sunroof market. Pop-up, tilt and slide, built-in, top-mount, removable and panoramic are the most commonly used sunroofs in automobiles. Pop-up sunroofs are one of the oldest sunroofs systems in use. They have a very basic construction with a vent in the rear and a removable glass panel. These sunroofs are manually operated.

This report highlights the current market synopsis of the automotive sunroofs market along with future anticipated market growth during the period from 2016 to 2024. In addition, various political, economic, social and technological factors that are anticipated to affect the current and future demand of the market is also provided in this report. Moreover, information related to key players operating in the market along with their market share and key strategies adopted to maintain their leading position is also provided in this report. The report also contains the present market size of automotive sunroof market in terms of revenue (USD Million) along with predictive forecast from 2016 to 2024.

The global automotive sunroofs has been segmented as follows: