An automotive dashboard camera, also known as dash cam, blackbox, and in-car camera, is a small video recording device, generally mounted at the rear view mirror. It comprises a storage device and is powered by the vehicle battery, or sometimes by an individual battery. A dashboard camera can be mounted by means of a suction cup or adhesive tape. In some countries, such as Russia, it is a mandatory device and is gaining popularity in other countries across the globe. 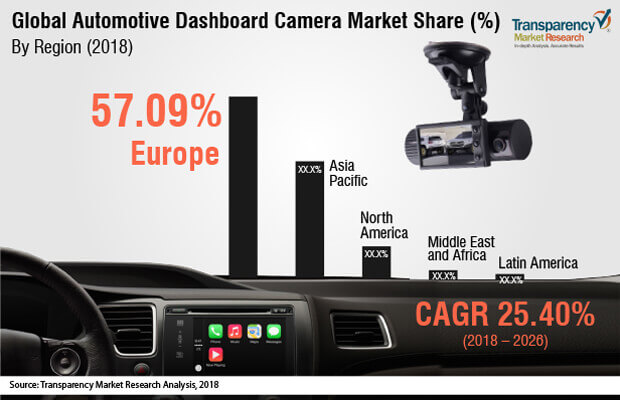 Dashboard camera footage is accepted by the law and insurance companies as evidence in case of accidents and illegal incidents. Therefore, the footage needs to be clear enough to recognize the things in the footage clearly. Consequently, cameras with higher resolution are preferred by consumers. Decreasing prices of higher resolution cameras, increased preference of consumers to record activities in high definition, and increase in adoption by OEMs are fueling the demand for 1080P and higher resolution cameras. Increase in on-road recreational activities, expansion of ride hailing and ride sharing markets, increased rate of accidents, support from insurance companies, and acceptance by law are prompting passenger vehicle owners to install a dashboard camera. Commercial vehicles are witnessing a surge in adoption of dashboard cameras, which is attributed to the increased preference for vehicle surveillance by fleet owners.

The report comprises a detailed value chain analysis, which provides a comprehensive view of the global automotive dashboard camera market. The Porter’s Five Forces model for the automotive dashboard camera market has also been included to help understand the competitive landscape in the market. The study encompasses market attractiveness analysis, wherein technology is benchmarked based on market size, growth rate, and general market share.

The study provides a decisive view of the global automotive dashboard camera market by segmenting it in terms of application, connectivity, placement, number of lens, power source, resolution, vehicle type, sales channel, and geography. These segments have been analyzed based on present and future trends. Regional segmentation includes the current and forecast demand for dashboard camera in North America, Europe, Asia Pacific, Latin America, and Middle East & Africa. The report also covers the demand for individual segments in all major countries across all
the regions.

The global automotive dashboard camera market has been segmented as follows: