According to the report, the market is expected to exhibit an exponential CAGR of 52% in terms of revenue. 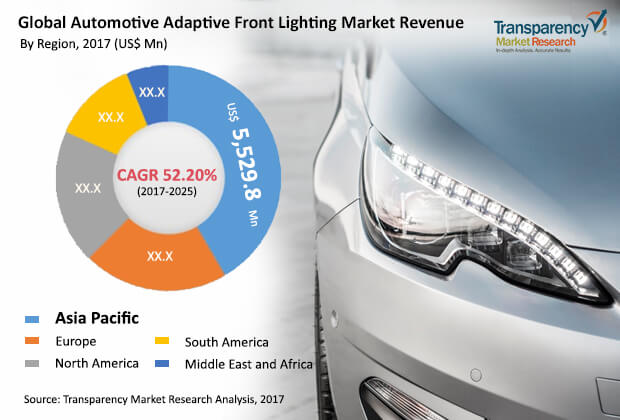 Xenon Headlights to Remain Most Popular

Based on the technology used for automotive adaptive front lighting, the global market has been segmented into xenon headlight, LED headlight, Laser headlight, and OLED headlight. In 2016, the xenon headlight and LED headlight segment held the highest share of the global market. Xenon headlight is xenon arc lamp, which is a specialized type of gas discharge lamp, an electric light that produces light by passing electricity through ionized xenon gas at high pressure. It produces a bright white light that closely resembles with natural sunlight. An LED lamp is an electric light or bulb used in lighting fixtures that produces light using light-emitting diodes. LEDs use only about 10% of the energy an incandescent lamp requires.

Europe and Asia Pacific to Remain Most Promising Regional Markets

Geographically, the global automotive adaptive front lighting market has been segregated into North America, Latin America, Europe, Asia Pacific, and Middle East and Africa. In 2016, the largest share of the global automotive adaptive front lighting market was acquired by Europe. Asia Pacific and Europe jointly held about 82% of the market in terms of revenue in 2016. The key factors that are driving the growth of the market in these regions are an increasing need for technologically advanced features for passenger safety and productivity coupled with the incentive to increase manufacturing activities.

The emerging countries of Asia Pacific are expected to record the highest growth rate during the forecast period such as China and Japan. Increasing production of passenger vehicles, owing to several factors such as lower cost of production, increase in productivity and safety in operation of vehicles are set to drive the market of automotive adaptive front lighting in the this region from 2017 – 2025. Establishment of several outsourcing companies in the south east Asian and Indian subcontinent have raised the necessity for working round the clock requiring, commutation even during night hours, entailing advanced lighting systems during dark hours to avert mishaps. This in turn is likely to boost the demand for adaptive front lighting in the coming couple of years.

Adaptive Front Lightings have become an essential part of automotive in the current situation. Efficiency and effectiveness of the system during night is the main reason for installation of this system. Adaptive front lighting system (AFS) enhances distribution of light from the headlights according to driving circumstances. Depending on vehicle speed and steering input, the system points the low-beam headlights toward the direction the driver intends to travel. Automotive Adaptive Front Lightings helps in maintaining a safety of the passenger. The regulations pertaining to passenger safety and set by the regulatory bodies are likely to become tougher during the forecast period. This in turn will mandate the automobile manufacturers to use Automotive Adaptive Front Lightings in the cars produced, thereby encouraging the growth of the market during the forecast period.

This report on the global automotive adaptive front lightings market highlights the current scenario of the market along with stating the expected growth of the global market during the forecast period. Various political, social, economic and technological factors which are likely to impact the demand of automotive adaptive front lightings have been analyzed to include an exhaustive study of the global market drivers, restraints and opportunities, i.e. the market dynamics under the purview of the report. Further, the key players operating the automotive adaptive front lightings market have been profile thoroughly and competitively across the five geographic regions and their competitive landscape is inclusive of their recent developments related to automated guided vehicles and the distinguishable business strategies adopted by them.

The global Automotive Adaptive Front Lightings market has been segmented into: