The global atomic layer deposition (ALD) market has reported strong growth in the last few years. Transparency Market Research (TMR) forecasts that the market will continue to exhibiting steady growth between 2016 and 2024 as the use of the ALD technology increases in the production of smartphones, DVD players, printers, and other electronics. A few of the key applications of atomic layer deposition include industrial, biomedical, video games, portable media players, microelectronics, and quality control. 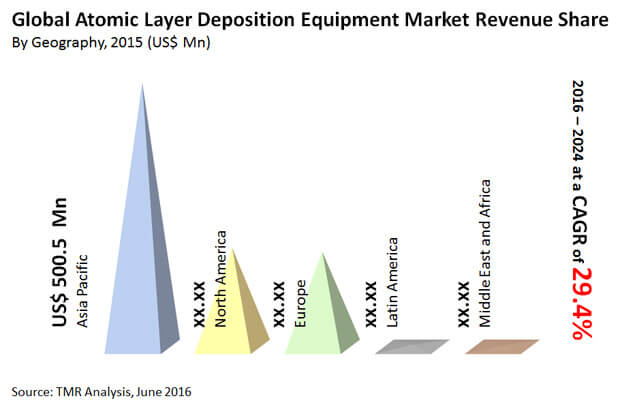 From the geographic standpoint, North America, Asia Pacific, Europe, Latin America, and the Middle East and Africa constitute the most lucrative markets for ALD equipment. Among these, Asia Pacific has emerged as the leading regional market due to the increasing application of ALD across core industries. The region held approximately 57.2% of the global ALD equipment market in 2015 in terms of revenue.

As per TMR, the rapid expansion of the automotive, electronics, and semiconductor industries will stimulate demand for ALD equipment in Asia Pacific. The regional market is also likely to gain from the rising demand from medical centers. According to TMR, the Asia Pacific ALD market, which stood at US$500.5 mn in 2015, is expected to reach US$5.1 bn by the end of 2024. The market is expected to exhibit a CAGR of 29.9% during the forecast period. The increasing use of ALD equipment across industrial set ups is also expected to boost its sales in North America.

Applications in Nanotechnology to Boost Opportunities for ALD Equipment Market

In the last few years, the use of atomic layer deposition has significantly increased in nanotechnology. The recent technological advancements in the ALD technology in terms of scalability, performance, and reliability have made this possible. With the advent of more advanced technologies, the usage of ALD equipment as manipulation and fabrication tools in nanotechnology is expected to accelerate. Furthermore, the sales of ALD equipment are poised to surge due to the rising demand for less time consuming and effective semiconductor equipment manufacturing process.

However, the process of ALD is very time consuming, which indirectly acts as a growth suppressant for the ALD equipment sales. The stringent export control regulations are also expected to create bottlenecks for the market. Besides this, the high initial investment required for ALD equipment and the lack of skilled workforce also inhibit the growth in ALD equipment sales to an extent.

Nevertheless, the increasing applications of ALD in semiconductor and electronics and energy devices is expected to keep the demand for ALD equipment high in the forthcoming years. The increasing research and development on atomic layer deposition technologies is projected to boost opportunities for the ALD equipment market. The market is also expected to significantly gain from the increasing application of atomic layer deposition in power devices and energy storage devices.

Atomic layer deposition (ALD) equipment is used for depositing thin films. A range of materials can be used for ALD. The process is characterized by the remarkable conformity to high aspect ratio surfaces in various surfaces. They are extensively used in the semiconductor industry for depositing films in forming structures in sensors, memory devices, and micro-electro-mechanical systems. A key drive for atomic layer deposition equipment market is propelled by advances in fabrication technologies for a wide range of semiconductor devices that are used in smart enterprise and commercial applications. Current fabrication methods support smaller and complex substrates films, thereby nudging equipment and platform manufacturers in atomic layer deposition (ALD) equipment market to improve ALD techniques. A lucrative demand in the atomic layer deposition equipment market comes from the application of ALD in coating for protection applications. Numerous industrial applications utilize ALD for depositing protective and functional coatings. An example is fuel cells. Advances in platforms and the software have enabled users to vary different parameters. Further, the adoption of configured safety protocols is a key trend in the currently available ALD platforms.

The COVID-19 pandemic that had struck the world in 2019 is still emerging in some regions. The impacts of the outbreaks have been a mix of devastating public health effects and economic activities. Businesses in 2020 had to shift toward new strategic and operational frameworks for remaining agile in the wake of the growing aftermath. In recent months, numerous industries have been quick to adopt digital technologies and automation in their production units to overcome some of the disruptions. Perhaps, the most virulent and long-term impacts are uncertainty in demands from end consumers, and the businesses in the atomic layer deposition equipment market are not immune to the shifts. Use of ALD in research and development applications in lifesciences industry will spur new growth potential in the next few months. The changing process requirements will also expand the avenue.

Globally, electronic device components are being pushed towards micro spatially demanding structures. With the gradual movement towards the limit of Moore’s Law, several research and development (R&D) programs are ongoing in pushing the limit of Moore’s law. Thin film deposition techniques aid the semiconductor industry in performing the same. It is a process of creating a thin layer on top of a substrate or on top of another ‘thin film’. The thickness of the films can range between nanometers to micrometers. Thin film deposition is currently in very high demand and enormous amount of R&D is also ongoing to develop the process further. It is currently being used for various different applications, such as printed electronics, energy generation, optical coatings and energy storage among others. Thin film deposition process can be broadly divided in to Chemical Vapor Deposition (CVD) and Physical Vapor Deposition (PVD). Atomic Layer Deposition (ALD) is considered to be a type of CVD. Both CVD and PVD have various different techniques, advantages and disadvantages. Additionally, continuing technological advancements, has led to the possibility of deposition of different materials on required substrates.

Growing application of Atomic Layer Deposition (ALD) thin film coating techniques in the fabrication of a variety of electronic devices and components in the semiconductor industry is one of the major driving factors of the market. ALD technique can also be used to encapsulate devices against oxygen, moisture, and impurities in order to ensure long and failure-free operation. Apart from this, ALD has potential applications in industrial production processes which include biocompatible coatings for medical applications, solar cell efficiency enhancement, anti-tarnishing of coins and jewelry, and powder-based catalyst materials among others.

Based on type, the market is segmented intoAluminum Oxide (Al2O3) ALD, Catalytic ALD, Metal ALD, ALD on Polymers and others.Alumina is one of the most studied ALD coated material. Aluminum oxide (Al2O3) is a highly robust and stable material, and has been extensively researched for a wide range of applications in micro and optoelectronics.Furthermore, by application the market is segmented into semiconductor and electronics and research and development facilities. Geographically, the global atomic layer deposition equipment market is categorized into North America, Europe, Asia Pacific, Latin America, Middle East and Africa. The scope of the report offers an insight into ALD equipment market in these regions based on revenue (USD million).

The competitive profiling of the key players in the global ALD equipmentmarket across major geographic regions is included in the study. These include diverse business strategies adopted by the leading players and their recent developments as in the field of ALD equipment.

A comprehensive analysis of the market dynamics that is inclusive of market drivers, restraints and opportunities is included in the purview of the report. Market dynamics are the distinctive factors which impact the market growth, thereby helping to understand the ongoing trends of the global market. The report provides the forecast of the global market for the period from 2016 to 2024, along with offering an inclusive study of the ALD equipment market.

The Global atomic layer deposition equipment market has been segmented as follows: