The global atherectomy devices market is growing at a high rate with the development of the medical infrastructure. The participation of new players and the advent of new and effective products are projected to ensure the growth of the market in the coming years. In addition to this, the commercialization of atherectomy devices is projected to generate growth prospects for the players worldwide. The leading players are making efforts to create an awareness among people concerning the availability of devices and therapeutics. This is expected to support the overall development of the atherectomy devices market in the coming few years. 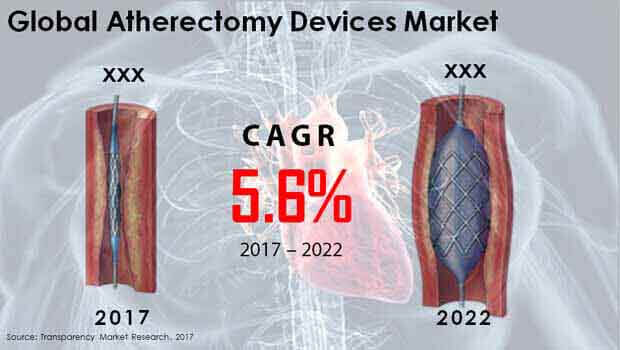 On the other hand, in developing nations, there is low awareness among people concerning the easy availability of disease diagnosis and therapeutics, which is predicted to hamper the market growth in the coming years. Also, the lack of well-trained surgeons are estimated to further restrict the market growth in the near future. Nonetheless, the increasing government initiatives and expenditure is estimated to support the development of the overall market in the next few years. Also, the key players are targeting on emerging economies, which offers potential growth opportunities in the near future.

From a geographical stance, the North America market is predicted to claim for a massive share of the atherectomy devices market in the coming few years. The favorable reimbursement environment and the growing demand for minimally invasive procedures are the main factors that are estimated to accelerate the market growth in the next few years. Europe is projected to retain its second-leading position and register a promising growth rate in the coming years. Furthermore, the rising geriatric population and the increasing contribution from India, China, and Japan are projected to ensure a healthy growth of the market in the next few years.

The global market for atherectomy devices is considered to have a high level of competition among the players in the coming few years. The key players in the market are making ardent efforts to maintain their position by focusing on the development of new products and technological developments. In addition, the rising number of collaborations and partnerships is projected to create potential growth opportunities for the players in the coming few years. The leading players in the atherectomy devices market are Boston Scientific Corp., Avinger Inc., Royal Philips NV, Spectranetics Corp., Terumo Corp., Medtronic Plc, and Cardiovascular Systems Inc.

The increasing development of the healthcare and medical sector is expected to promote the growth of the global Atherectomy devices market in the years to come. The developing interest from individuals for insignificantly intrusive techniques and the rising pool of patients are the key factors that are foreseen to empower the improvement of the worldwide atherectomy gadgets market in the coming years. The developing spotlight on innovative turns of events and the presentation of new items are assessed to support the improvement of the market soon. Moreover, the expanding research exercises and the fast advancement of the clinical framework are additionally assessed to guarantee the market development in the coming years.

The rising interest from patients for less intrusive strategies and the rising number of cases are the principle factors that are anticipated to drive the development of the worldwide atherectomy gadgets market soon. Rising new advancements are prompting the presentation of new items in the market, for example, laser based atherectomy. These developments are giving new alternatives to patients and opening new chances for clinical experts. These advancements are probably going to keep during the estimate time frame as spending on examination keeps on expanding.

The growing demand from people worldwide for minimally invasive procedures and the rising pool of patients are the key factors that are anticipated to bolster the growth of the global atherectomy devices market in the near future. The increasing emphasis on the introduction of new products and growing investments on technological advancements are estimated to encourage the development of the market in the near future. Moreover, the rise in research activities and the rapid development of the healthcare infrastructure and facilities are further projected to add impetus to the market in the future.

Significant expenses of innovative work and forte hardware for laser systems can control development of the worldwide atherectomy gadgets market. In any case, innovation drive patterns prompting do-it-without anyone else's help analytic apparatuses are required to help development of the market by bringing down a part of the expenses.

Taking vendor landscape into consideration, the market for atherectomy device can be regarded as significantly fragmented and the market players emphasize on strategically important acquisitions, mergers, collaborations and partnerships in a bid to strengthen their hold on the market.

For the treatment of various peripheral, neurovascular, and cardiovascular diseases, atherectomy devices are mainly used. Ambulatory surgical centers or ASCs as it is conveniently called, clinics, and hospitals mostly make optimum use of atherectomy devices. More specifically, hospitals across the globe have been generating much higher demand for the said devices. Apart from the hospitals, it’s also the categories of ASCs and clinics that are forecasted to register a robust growth as a result of the increased adoption of these atherectomy devices in the coming years.

As noticed by the TMR analysts, increasing occurrences of peripheral artery diseases worldwide is prognosticated to boost the world atherectomy devices market. Furthermore, substantial expansion of the geriatric population across the globe has significantly increased the number of people who have been affected with peripheral artery diseases. This has eventually bolstered the demand for the said devices worldwide. It is also forecasted that the said market is expected to benefit significantly in the forthcoming years from the increasing preference of minimally invasive procedures of surgery.

The market research report also comes with geographical segmentations and analysis of the world market for atherectomy devices market. In accordance with the said study, the market extends across the regions of Japan, the Middle East and Africa (MEA), North America, Europe, and Asia Pacific excluding Japan (APEJ). Of all of these regions, North America has emerged as the one of the most dominating zones for the global atherectomy devices market. Availability of encouraging reimbursement facilities has further assisted the North American market significantly in the last few years.

Each and every regional classification has been thoroughly studied in this research publication with an aim to make an offering of a comprehensive, well-informed assessment of the market performance in various different geographies across the globe.

The vendor landscape of this market for atherectomy devices is quite competitive and the same is foreseen to become more intense in the forthcoming years. The authors of this report have profiled some of the topnotch companies that are active in this market. Companies such as Cardiovascular Systems Inc., Medtronic Plc., Royal Philips NV, Avinger Inc., Boston Scientific Corp., Terumo Corp., and Spectranetics Corp. are some of the eminent vendors that adorn the global market for atherectomy devices.

For the purpose of this study, the market has been segmented as follows: