Over the past decade, the demand for astaxanthin, particularly from the skin biology sector, has witnessed considerable growth. Traditionally, astaxanthin is obtained by chemical synthesis and despite a spike in interest in other production technologies including bacterial fermentation. The global astaxanthin market is set to witness considerable growth during the forecast period, due to the surge in demand for astaxanthin from different end-use industries, including pharmaceutical, cosmetics, food & beverages, aquaculture & animal feed, and dietary, among others. As several research activities continue to offer more evidence pertaining to health benefits and potential nutraceutical applications of astaxanthin in the dermatology field, its demand is set to witness unprecedented growth in the coming years.

At present, the primary source of astaxanthin is microorganisms, including fungi and microalgae. However, seafood processing wastes have also emerged as an ideal source of astaxanthin, wherein waste shrimps have gained a great amount of popularity, particularly for astaxanthin extraction. At present, participants of the current market for astaxanthin are increasingly focusing on adopting environment-friendly extraction techniques and the commercial production of astaxanthin complexes. More recently, the aerospace sector has expressed interest in astaxanthin as research activities continue to single out the benefits of microalgae in space. At the back of these factors, the global astaxanthin market is reach the value of ~US$ 1.3 Bn by 2030. 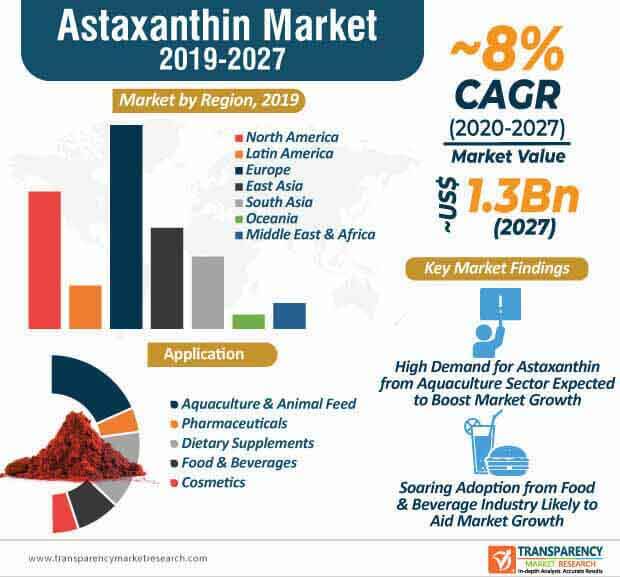 Request a sample to get extensive insights into the Astaxanthin Market

The consistent growth in the demand for astaxanthin particularly from the food industry is expected to boost the growth of the astaxanthin market during the forecast period. In the past few decades, astaxanthin is increasingly being used as a food additive, owing to health benefits, including anti-inflammatory effects, improved immunity, and prevention of cerebrovascular and cardiovascular diseases, among others. Over the past decade, several studies have revealed that astaxanthin can play an important role in preventing photoaging, improving sleep, minimizing obesity, protecting vocal cord, combating depression, and increase sperm motility, among others.

The demand for astaxanthin from the food industry is on the rise, as it is increasingly being used as a food-coloring agent, an antioxidant to preserve the taste, color, freshness, and quality of food items. Traditionally, astaxanthin was predominantly used to retain the nutrients of the food from damage, enhance sensory aspects, and improving the overall appeal of food products. Within Europe, astaxanthin has attained approval as an essential raw material to develop dietary supplements. However, due to the instability of astaxanthin, it is vulnerable to degradation by a host of environmental factors, research activities continue to focus on this area within the astaxanthin market.

Companies operating in the astaxanthin market landscape are also expected to launch innovative and eco-friendly bio-astaxanthin to gain an edge over competitors. Several companies are expected to allocate funds for research and development of new astaxanthin that is expected to find applications in the aquaculture space. For instance, KnipBio launched a new range of KnipBio Meal that contains bio-astaxanthin– an ingredient that plays a key role in improving the overall health of aquatic species, including shrimp, trout, and salmon, among others. Several researchers are also focused on finding new techniques to synthesize natural astaxanthin. For instance, in December 2019, a team of researchers from Japan revealed that they have discovered a novel way to synthesize natural astaxanthin by utilizing marine algae. 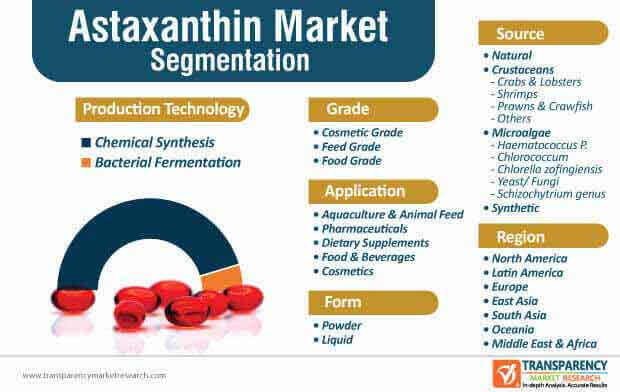 Astaxanthin Market - Scope of the Report

Key indicators of market growth, which include year-on-year (Y-o-Y) growth of the market, value chain, supply chain analysis, and compounded annual growth rate (CAGR) are explained in the TMR’s study in a comprehensive manner. This information can help readers understand the quantitative growth prospects of the astaxanthin market during the forecast period.

The study also includes statistics and facts related to the macro as well as microeconomic factors that are impacting developments in the market. It also offers actionable insights into the market based on the future trends in the astaxanthin market. Furthermore, small businesses and new entrants in the astaxanthin market too can make use of the information presented in this study, based on which, they can make appropriate business decisions in order to gain momentum in the market.

Secondary resources referred to by analysts during the production of the astaxanthin market study include statistics from governmental organizations, trade journals, white papers, and internal and external proprietary databases. Analysts have interviewed senior managers, product portfolio managers, CEOs, VPs, marketing/product managers, and market intelligence managers, who contributed to the development of this report as a primary resource.

The report segments the astaxanthin into various segments - source, grade, application, form, production technology, and region. This report offers comprehensive data and information about the important market dynamics and growth parameters associated with these categories.