A retractable needle safety syringe is fully integrated with safety mechanism, which is designed to withdraw the needle into the barrel of the syringe after the full delivery of a dose. When the liquid is expelled, the operator has to apply additional pressure to the plunger to break the seal and retract the needle into the syringe. Retractable syringes are safe and time-saving and reduce waste volume compared to disposable syringes. Retractable needle syringes are used in several indications such as cancer, diabetes, tuberculosis etc. but highly used in diabetes. According to Asian diabetic prevention initiatives 60% of diabetics in the world lives in Asia. By 2030, without intervention, both China and India combined will have almost half a billion diabetics 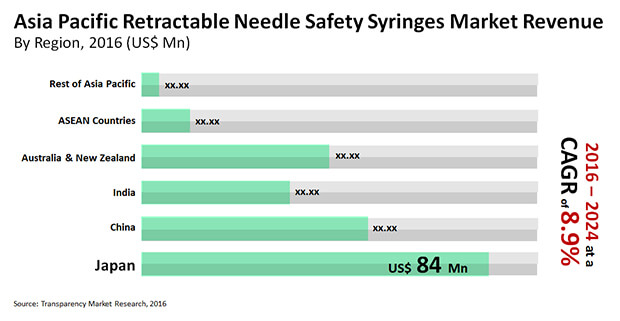 Country-wise, Japan emerged as the dominant market for retractable needle safety syringes in Asia Pacific. Exhibiting a robust 9.1% CAGR, the nation is predicted to remain dominant through the course of the forecast period. Consumers in Japan are more aware, which has resulted in the earlier adoption of novel therapeutics and medical practices. This, coupled with the rising geriatric population, high willingness to spend on advanced treatments, and the rising incidence of diabetes have creates a fertile terrain for the market to flourish in Japan.

Besides this, opportunities are likely to bolster in the India market as well. By 2024, the nation will exhibit robust growth benefiting from the increasing awareness among citizens, rising demand for advanced safety syringes, and the increasing incidence of chronic ailments. Additionally, the Indian government has increased their healthcare spending, which is expected to have a positive impact on the retractable needle safety syringes market. Overall the countries in ASEAN will offer lucrative prospects for the retractable needle safety syringes market on account of the rising demand for advanced healthcare, which is further bolstered by the population growth rate.

The growing geriatric population, coupled with the increasing cases of chronic diseases stands as a major growth driver for the growth of the global retractable needle safety syringes market. Such needles are coordinated with safety component, intended to pull out the needle into the barrel of the needle after the full conveyance of a portion. At the point when the fluid is ousted, the administrator needs to apply extra strain to unclog and break the seal and withdraw the needle into the needle. Retractable syringes are protected and efficient and decrease squander volume contrasted with expendable syringes. Retractable needle syringes are utilized in a few signs like malignant growth, diabetes, tuberculosis and so forth however profoundly utilized in diabetes.

Different factors such as the rising geriatric populace, expanding occurrence of constant afflictions, developing mindfulness among doctors just as patients, and the interest for cutting edge treatment modalities have acted for the retractable needle safety syringes market. Additionally, various government initiatives towards advancing the nature of medical services and rising clinical the travel industry. Likewise with a few nations taking part in spreading wellbeing mindfulness close by global associations, the market is likely to rise exponentially in the years to come.

With different government foundations emphasizing on the advancement of safe infusion rehearse by moving individuals to make a move to safe syringes, this market is required to rise dramatically in the years to come. Nations, for example, India and different countries in the Southeast Asia are increasingly teaming up with the WHO in order to empower the use of safe syringes in an offer to keep away from the expansion of lethal illnesses.

Furthermore, the market is additionally expected to acquire considerably over the time of figure from various variables, similar to the developing mindfulness relating to the advantages offered by retractable needle safety syringes, expanding movement of individuals towards self-organization of medications, and innovative headways.

The Retractable Needle Safety Syringes market has been segmented as follows: