During the past decade, drones have played a key role in several avenues, particularly in the defense sector. Unmanned aerial vehicles (UAVs), flying robots, and compact pilotless aircraft continue to gain considerable popularity around the world. Although advancements in drone as well as anti-drone technology are rapid, the anti-drone market is currently at the nascent stage due to which, there is tremendous scope for advanced anti-drone technologies and concepts in various industries. While the demand for drones, mainly from defense and e-Commerce sectors is on the rise, mass adoption of the anti-drone technology is gradually taking shape, owing to advancements in various technologies.

The adoption of anti-drone systems and technologies from business as well as government organizations around the world is on the rise and as per current trends, anti drone technologies are gradually piercing into different industrial sectors. Players operating in the current anti-drone market are increasingly focusing on improving the accuracy, range, size, and several other functional and physical parameters of their solutions to gain a competitive edge in the current market landscape. Several players in the market are investing noteworthy resources in testing various prototypes and improving the design aspects of their anti-drone systems.

While government agencies are expected to remain primary consumers of anti-drone systems, considerable research is being carried out to investigate the potential of these solutions in a spectrum of industrial sectors. At the back of these factors, the global anti-drone market is expected to reach US$ 3.5 Bn by the end of 2030. 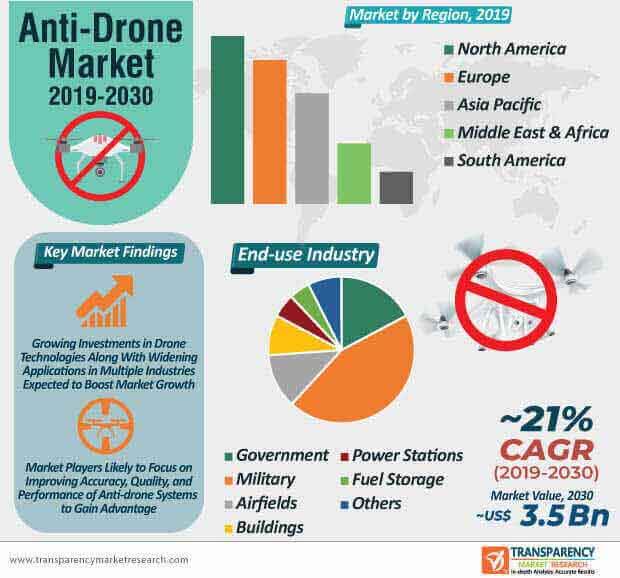 Over the past decade, owing to safety concerns and potential threat to national security, anti-drone systems have garnered considerable interest around the world. Military as well as non military drones have repeatedly posed considerable security threats to various nations around the world due to which, the demand for anti-drone technologies and systems is expected to witness considerable surge during the forecast period. At present, multiple players operating in the anti-drone market landscape, including startups and state-owned contractors are focusing on the development of anti-drone systems that have the capability to track, detect, jam, and destroy rogue drones. In addition, several aerospace and defense manufacturers are increasingly focusing on developing anti-drone systems that are highly efficient even at night. 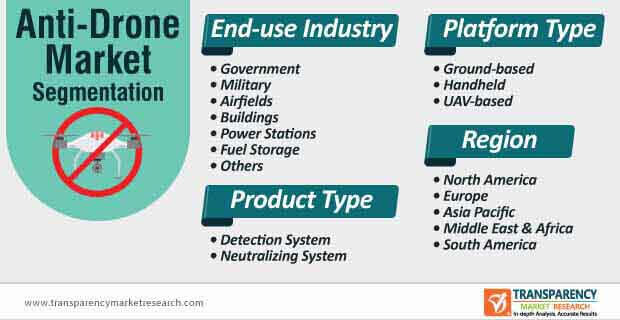 Demand for Anti-drones to Flatten amid COVID-19 Pandemic

The COVID-19 pandemic is expected to have a short-term impact on the global anti-drone market. While technological advancements are likely to drive the market to new heights over the course of the forecast period, disruptions in the supply chain coupled with restrictions on cross-border trade are likely to cause delays in the completion of raw material and component consignments, particularly from China. While the market growth is anticipated to remain slower than initial projections, the demand for anti-drone systems and technologies is projected to grow at a consistent pace in the COVID-19-free era, as governments continue to strengthen their defense capabilities.

Stuck in a neck-to-neck competition with other brands? Request a custom report on Anti-drone Market

The global anti-drone market is expected to grow at an impressive CAGR of ~21% during the forecast period due to several factors including growing investments in drone technologies, advancements in ancillary drone and anti-drone technologies, widening applications in various industries, and heightening global interest in unmanned aerial vehicles (UAVs). Market players are expected to focus on improving the performance, accuracy, and quality of their anti-drone systems. Due to the presence of an array of leading companies in North America and Europe, these regions are likely to spearhead innovations in the global anti drone market.

Demand for Anti-drones from Commercial Sector: A Key Driver

Rise in Demand for Anti-drones for Military and Defense Purposes: A Key Driver

Anti-drone Market – Scope of the Report

Key indicators of market growth, which include value chain analysis and compound annual growth rate (CAGR), are elucidated in TMR’s study in a comprehensive manner. This data can help readers interpret the quantitative growth aspects of the global anti-drone market.