Advances in chemical profiling of flavonoids have led the development of antioxidant protective agents against several chronic ailments in recent years. Anthocyanin has been one of the leading emphasized category of flavonoids, where efforts of food researchers have led progress in the epidemiology of anthocyanin, in terms of metabolism and biosynthesis, phytochemical investigations and prevalence in plants. As the demand for natural colorants and additives over synthetic variants continues to spur, anthocyanin has gained widespread acceptance in the global food & beverage industry, post-approval as an effective and healthy additive by international regulatory bodies.

The increasing transition towards natural food flavonoids and colorants has directed the efforts of food scientists into understanding the efficacy of anthocyanin as a health promoter and in the treatment of diseases. Studies indicate nearly 84 million people in America alone to suffer from cardiovascular diseases - accounting for 1 in 3 deaths. Data from clinical trials have attested the benefits of anthocyanin on the heart and circulatory health, where subjects with the highest anthocyanin intake were 9% less likely to suffer from coronary heart disease.

Key regulations on synthetic food colorants imposed by governing bodies are directing attention of food producers towards natural solutions such as anthocyanin -conventional, natural food colorant. The effective of anthocyanin pigments in terms of its health benefits and the proven anti-oxidant properties, anti-cancer nature, neuro-protective profile, is expected to translate in a healthy demand for the anthocyanin pigments in the near future. With such beneficial attributes, anthocyanin is gaining diverse applicability, not only in the food and beverage sector, but also in the healthcare and pharmaceutical industries. 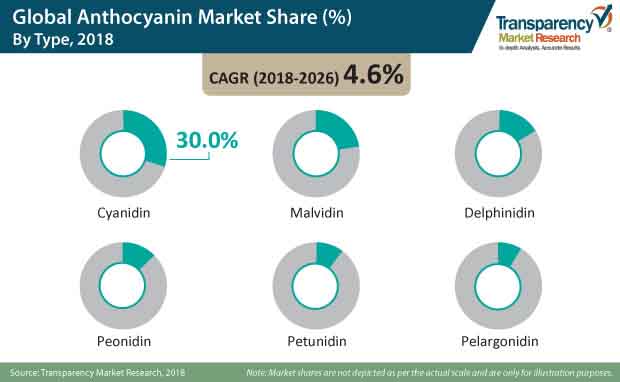 Food manufacturers are shifting their focus towards additives, ingredients, and colorants such as anthocyanin that promote the health profile of food products, in an attempt to cope up with the changing consumer preferences. One such trend observed across the end-use industry is the blue wine trend. Blue is not approved as a wine color in Spain, which resulted in the initial ban of the blue wine. After striding through a number of regulations and red tape, it was passed through, being added into the category of ‘other alcoholic beverages’. Made from grapes, having anthocyanin, the high blue pigment in its skin, the wine gets a natural blue color. Progressing its way into the French market, the blue wine trend is likely to push the growth of the anthocyanin market.

Purple foods are emerging as a popular choice among consumers for both the color and the associated health benefits. The purple food revolution cited across various parts of the world is expected to push the expansion of the anthocyanin market in terms of extraction. Research has revealed that the highest content of antioxidant activity and anthocyanin in tropical purple fruits were java plum followed by sweet potato, tomi-tomi, and Bali grape. As researchers have linked anthocyanin to increased longevity, the purple foods penetration is directly linked to the anthocyanin market growth.

The companies operating in the anthocyanin market are focusing on improving the foothold in the food additives industry. Geographical expansions are among the key strategies implemented by the anthocyanin market players in an attempt to achieve business expansion. The production of anthocyanin by the commercial development of plant cell culture is likely to pick pace over the coming years. Primary studies and trials on the regulation of anthocyanin biosynthesis on the enzyme and gene levels are revised, presenting the feasilibility for cloning genes, thereby improving yields of anthocyanin. With no commercial trials for anthocyanin production by the plant cell culture, the intelligent integration of existing strategies could provide a technology for industrial application viable to the current production processes.

MedPalett developed a patented, manufacturing process, together with the University of Bergen, that ensures minimum quantity of 80 mg anthocyanin per MEDOX capsule which is a berry extract developed from New Zealand’s wild Scandinavian bilberries and black currants.

Various efforts have been carried out to develop new analytical techniques for the process of identification and quantification of anthocyanin in plant materials, along with their effects in vivo and in vitro. A number of mass spectrometry (MS) instruments and advances in nuclear magnetic resonance (NMR) have provided an impetus to anthocyanin analysis. These developments are likely to boost the overall growth of the anthocyanin market.

At VitaFoods Europe, Naturex showcased Sweoat Brans, an oat beta glucan-based product that provides a range of health benefits which are EFSA-approved. Along with this, the company has showcased the Aronox aronia berry extract that is known to improve certain biomarkers for cardiovascular well-being which include endothelial function and is vital for blood circulation. The event also included a discussion on the benefits of Aronox, in a session that explored the effect of anthocyanin-rich foods on vascular functions, which was a part of the Vitafoods Education Programme.

Companies that focus on research and development activities to explore the application scope of anthocyanin will see promising growth prospects.  Leading players are focusing on innovative product developments to meet customer requirements, even as putting more efforts in marketing and advertisement activities for increasing their penetration in niche segments. Social media platforms remain potent for increasing the customer base, when used on a large scale.

Key Questions Answered in the Report

The TMR study on anthocyanin market is divided in sections to offer better individual understanding to the readers. Commencing with an executive summary, the report provides a brief understanding of the market through a market introduction. Furthermore, the inclusion of time line and product mapping in terms of technology and application allow a holistic understanding of the market. The TMR evaluation and recommendations in terms of anthocyanin market are further adding to the credibility of the publication.

The next section of the report includes a key indicator assessment comprising of market size and market forecast, Y-o-Y growth, and absolute $ opportunity. The next section comprises of a detailed supply chain evaluation that discusses the active market participants such as manufacturers, raw material suppliers, distributors, and retailers. Apart from this, the study provides a pricing analysis with respect to the key regions along with a unique price evaluation of the factors influencing the pricing in the anthocyanin market.

The last section compiled in the business intelligence report provides a detailed competitive analysis of the anthocyanin market. The inclusion of a unique dashboard view of the anthocyanin market players allows the readers to get competitive information at a glance. The key developments made by market players, the significant strategies adopted by them, the along with the various factors driving their business, are all discussed in detail.

The report considers the average selling point across regions to calculate the market size. Other data points including market segmentation, regional analysis, qualitative inputs gained by primary respondents, have all be amalgamated to arrive at key market estimations. The anthocyanin market forecast included in the report evaluates the total market revenue to be generated through the anthocyanin market through the period of assessment, 2018 to 2026. The primary aspects considered while developing anthocyanin market forecast is the sizing up of the current market that forms the basis on which the market is expected to shape in the future.