Animal feed amino acids have emerged as an essential component of livestock nutrition. The global livestock production has improved at a significant rate in the past few years, owing to a range of factors. Some of the major factors that have directly or indirectly impacted livestock production in recent years include exponential growth of the human population, rise in disposable income, improvements in production efficiency, and environmental sustainability, among others. In addition, animal nutritionists around the world have been increasingly leaning toward the use of animal feed amino acids to fulfill the growing demand for livestock products and improve feed efficiency at lower costs.

The demand for animal feed amino acids has consistently increased in the past few years and the trend is set to continue during the forecast period (2019-2027). Most livestock do not have the ability to synthesize amino acids and thus, animal feed amino acids have gained tremendous popularity in the past few years. Research and development activities have revealed that lysine (Lys) and Methionine (Met)– the first and second limiting amino acids, are increasingly being used in lactating dairy cows to enhance production efficiency and decrease metabolic disorders incidences. 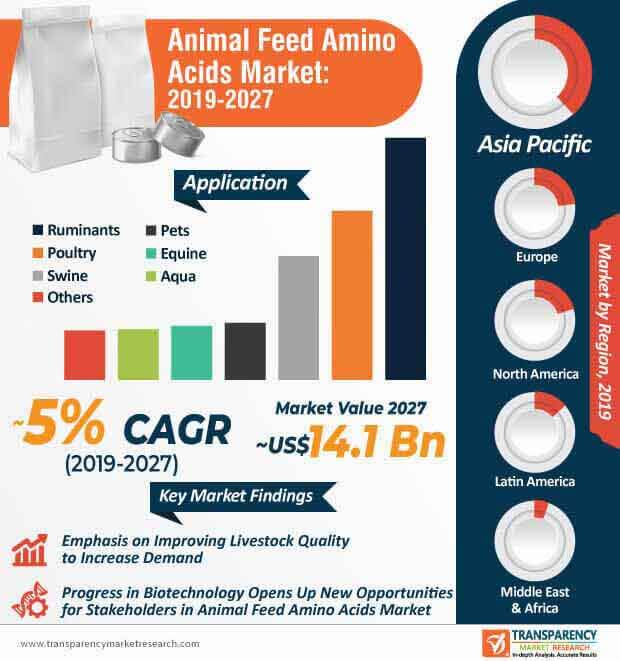 Amidst rapid growth of human population worldwide, there have been significant developments in animal productivity in recent years. Researchers are focusing on improving animal productivity and quantity by leveraging new technologies and techniques to feed livestock, streamline production systems, etc. Conventional techniques, such as breeding, genetics, livestock disease management, livestock nutrition, are extensively used to improve livestock. However, according to a research, due to the exponential rise in demand for livestock, conventional techniques deployed to improve livestock production are no longer sustainable. 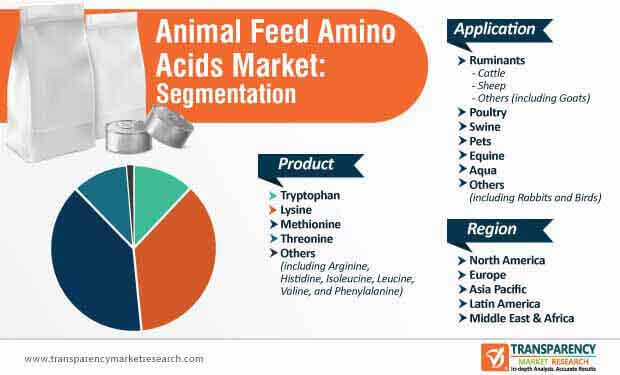 This TMR study on the animal feed amino acids market also provides data on the developments made by important players and stakeholders in the market, along with competitive analysis. The report also provides an understanding of the strengths, weaknesses, threats, and opportunities, along with the trends and restraints in the landscape.

This study also discusses the underlying trends and the impact of various factors that are driving the animal feed amino acids market, along with their influence on the evolution of the market.

This report answers these questions about the animal feed amino acids market, aiding major stakeholders and key players in making the right decisions and strategizing for the advancement of their business.

This report uses an analytical triangulation method to estimate the numbers of the animal feed amino acids market, with both the bottom-up and top-down approaches.

This report on the animal feed amino acids market provides information based on product, application, and region.