Subject matter experts of the analytical standards market at Transparency Market Research (TMR) recalibrated the dynamics of varying impacts, and found that, food safety turning into a global concern will chart the future growth course of the landscape. The influence of profound trends in the food and beverage industry, which include increasing consumer inclination toward packaged goods, underpinned by the 'grab ‘n go' culture, has put pressure on food producers to bring in innovation onto the table. However, compromised food quality, on account of the reckless use of chemicals as flavor enhancers, is the gap that has been serving as an entrance for manufacturers in the analytical standards market.

Opportunities also await in the environmental sector. Rapid rise in industrialization, coupled with financial support extended by central agencies for pollution prevention and control, has been increasing environmental consciousness among industrialists. Although the relevance of success factors is promising enough with billion-dollar horizontal markets, complementing the growth of the analytical standards market, the report also identifies a few inhibitors, which could slow down market movement. 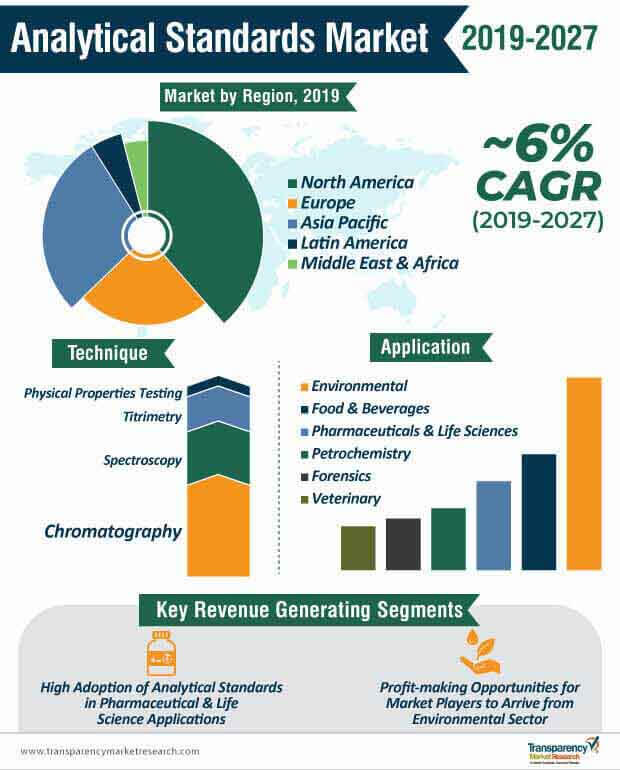 Chromatography Vs. Spectroscopy - Which is the Gold-standard Technique?

The TMR study finds that, the adoption of the chromatography technique is projected to remain high as compared to spectroscopy, both, in terms of value and growth rate. Primarily, pharmaceutical and life sciences, food and beverages, and environmental applications account for the wide scope of application of this technique.

In the environmental sector, identifying the presence of harmful components in solid waste, flame retardants, and pesticides, are the weighted applications relying on chromatography techniques to be considered as environmentally-benign products. While the purview of this technique also holds prominence in analyzing flavors and fragrances, GMO, Mycotoxins, and food additives, to ensure food safety. In the pharmaceutical industry, this technique is used to meet ideal drug and cosmetic standards.

Spectroscopy is a technique that is used for the identification of the nature of a compound. However, electronic circuit designs of spectrometers often affect the amount of noise, which, in turn, takes a toll on their accuracy.

How Players are Securing their Market Position to Grow Vertically

The analytical standards market is fragmented in nature, with numerous players operating at global, regional, and domestic levels. The high investment capabilities of global players set them apart in the space, with customization being their key feature. A leading player, Merck KGaA, illustrates this strategy. This market player boasts of its competency in the customization of chemicals for organic synthesis. However, the pricing strategy incorporated by regional and local players challenges the penetration of global players in local regions.

Strategies devised by regional players are intended toward establishing a strong market presence by upgrading the required competency through reciprocal advantages. It is, therefore, observed that, acquisitions, partnerships, and collaborations remain the standard strategies for this batch of players. For instance, in 2019, LGC announced the acquisition of Toronto Research Chemicals, a key manufacturer of synthetic organic bio-chemicals. This acquisition is intended at creating operational and commercial opportunities by introducing advanced products and services, in order to cater to the right mass.

Given the intensely-competitive space that the analytical standards market is, dedicated efforts made toward offering accuracy can help gain a distinguished position in the landscape.

Customization Strategy - Not Every Market Player’s Cup of Tea

Being a horizontal landscape, the analytical standards market operates at the intersection of numerous applications, from veterinary, forensic, petrochemistry, pharmaceuticals and life sciences, food and beverages, and environment. To cut through this thick space to establish a brand image, manufacturers of analytical standards are found catering to the customized requests from their clientele, which, in turn, puts pressure on their counterparts to adapt to new manufacturing trends.

It is also worth noting that, the cost of custom synthesis services varies on a project-to-project basis, which also increases the purview of work, given the additional research, documentation, testing, and development associated with customization. This is engendering the volatility in product offerings, which only financially-sound market players can afford to bear.

As a response to this approach, regional and local players squeeze their profit margins and sell products at relatively lower prices than the average selling price, which further intensifies the competition level. 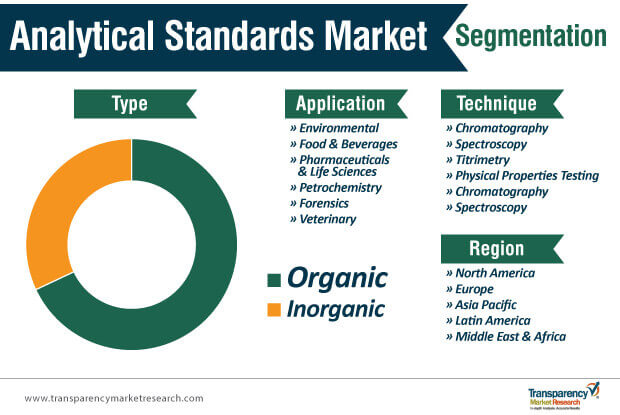 Weighing the relevance and impact of influential dynamics, authors of the report opine that, the analytical standards market will advance steadily at a CAGR of ~6% during the forecast period of 2019-2027. According to the analysis, North America will be on the vanguard, with high government funding in the environmental and pharmaceutical sectors serving as a base for research & development activities in the analytical standards market.

Based on types of analytical standards, organic standards are projected to witness significantly higher demand as compared to the inorganic ones, since the former holds high prominence in the laboratory tests of fertilizers and harmful chemicals. Since government initiatives are instigating environmentalists to conduct laboratory tests, market players can increase investments toward the development of qualitative analytical standards to improve the outcomes of these tests.

The report includes an elaborate executive summary, along with a snapshot of the growth behavior of various segments included in the scope of the study. Furthermore, the report sheds light on the changing competitive dynamics in the global analytical standards market. These indices serve as valuable tools for existing market players as well as for entities interested in entering the global analytical standards market.

A unique research methodology has been utilized by TMR to conduct comprehensive research on the growth of the global analytical standards market, and arrive at conclusions on the future growth prospects of the market. This research methodology is a combination of primary and secondary research, which helps analysts warrant the accuracy and reliability of the drawn conclusions.