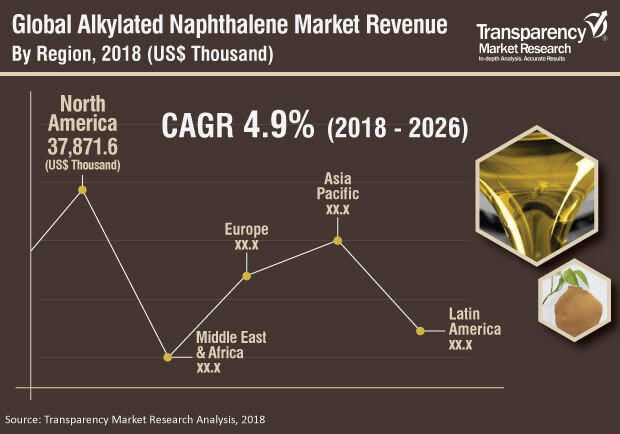 The automotive sector is a major consumer of lubricants. Additionally, usage of lubricants is imperative in the automotive sector, which increases dependency on lubricants and alkylated naphthalene. Rapid growth in population and rise in disposable income have propelled the demand for passenger and commercial vehicles. The global sales of cars and commercial vehicles stood at 96.8 million units in 2017. This is augmenting the demand for finished lubricants and alkylated naphthalene. Increase in disposable income and easy finance options have made purchasing of cars easy for the common man. Which is why the sale of 4 wheelers is increasing in developing countries. Lubricants are imperative for the smooth functioning of these vehicles. This, in turn, increases the demand for lubricants.

Key players profiled in the alkylated naphthalene market include ExxonMobil Corporation, King Industries Inc., and NACO Corporation. These players engage in long-term contracts, geographical expansion, and development and launch of new products. For instance, in June 2018, ExxonMobil Corporation acquired PT Federal Karyatama (FKT), an Indonesia-based lubricant manufacturer, which is a major manufacturer of motorcycle lubricants in the world. The acquisition is expected to help ExxonMobil strengthen its position in the lubricant oils industry in Indonesia. Additionally, in June 2018, ExxonMobil and Synthetic Genomics Inc. announced a breakthrough in joint research on advanced biofuels involving the modification of an algae strain. This is expected to double biofuel oil content without significantly inhibiting the strain.

In terms of volume, North America and Europe are leading regions of the alkylated naphthalene market. In terms of value, the market in Asia Pacific is projected to expand at a substantial pace during the forecast period, followed Latin America and Middle East & Africa. The market in Latin America is estimated to expand considerably owing to the rise in demand for lubricants in the automotive industry and increase in demand for these chemicals in compressor oil applications. In terms of country, the market in India, Canada, South Korea, and Mexico is anticipated to expand at a significant pace due to the rise in demand for lubricants in various end-use industries such as automotive, manufacturing, and mining during the forecast period.

The report comprises a detailed value chain analysis, which provides a comprehensive view of the global alkylated naphthalene market. The Porter’s Five Forces model for the alkylated naphthalene market has also been included to help understand the competitive landscape in the market. The study encompasses market attractiveness analysis, wherein applications are benchmarked based on their market size, growth rate, and general attractiveness.

The study provides a decisive view of the global alkylated naphthalene market by segmenting it in terms of grade, viscosity index, and application. The segments have been analyzed based on present and future trends. Regional segmentation includes the current and projected demand for alkylated naphthalene in North America, Europe, Asia Pacific, Latin America, and Middle East & Africa. The report also covers demand for individual grade, viscosity index, and application segments in all the regions. Key players operating in the alkylated naphthalene market include ExxonMobil Corporation, King Industries Inc., and NACO Corporation. Market players have been profiled in terms of attributes such as company overview, financial overview, business strategies, and recent developments.