Airships navigate through the air with their own power and are lifted into the air with hydrogen and helium. The various types of airships are predominantly being used for surveillance purposes as the safety has become a growing concern in the recent times. The low maintenance cost of airships and their ability to offer surveillance to large areas are acting as key growth drivers for the global airships market. According to the research report, the global airships market is projected to be worth US$273.2 mn by the end of 2024 as compared to US$152.8 mn in 2015. During the forecast period of 2016 and 2024, the global market is expected to expand at a CAGR of 6.5%.

Innovative approaches towards advertising and market are also influencing the global airships market to a large extent. Advertisers are opting for airships are they cover bigger areas, have improved visibility, and remain stationary. Thus, the cost-effectiveness of airships and their returns on investment in the field of advertising are making a significant impact on the overall market.  The tremendous capacity of these airships to handle weight has opened up the opportunity for these airships in the logistics sector. However, the global airships market faces a few challenges. The usage of hydrogen exposes these airships to the risk of inflammation, which can lead to fatal accidents. In view of these risks, researchers are working on developing hybrid airships that will partly operate on solar energy to mitigate the possibility of hazardous accidents. 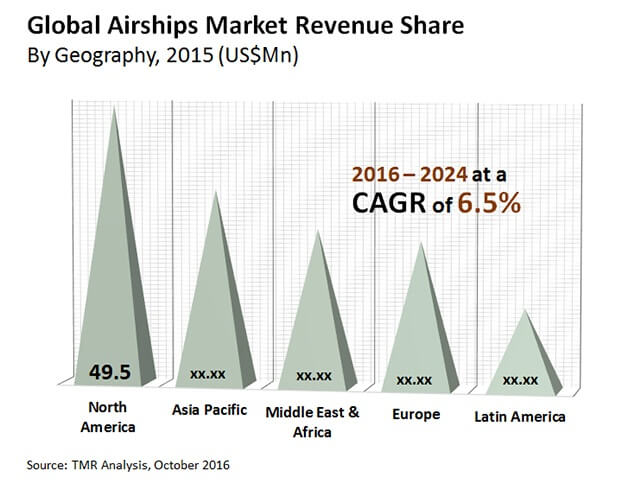 Geographically, the global airships market is segmented into North America, Europe, Asia Pacific, the Middle East and Africa, and Latin America. Of these North America is projected to dominate the global market as the U.S. will register maximum demand for airships. The dominance of this regional market will be due to the strong presence of manufacturers in the country and development of technologically advanced products that overcome challenges such as high inflammability of hydrogen gas. Analysts predict that non-rigid airships will show significant sale in the global market while the surveillance segment will witness a remarkable adoption of airships. Europe has also been observed as an emerging airships market as they are being adopted with the rise of the tourism industry.

Some of the leading players operating in the global airships market are Lockheed Martin Corporation, Zeppelin Luftschifftechnik GMBH, Hybrid Air Vehicles Ltd., Lindstrand Technologies Ltd., and Shanghai Vantage Airship Manufacture Co. Ltd. Analysts have observed that are several emerging players in the global market, which is anticipated to intensify the competition in the coming years.

Airships are lighter than air (LTA) airships. These aircrafts have the ability to navigate through air with the help of its own power. Airships, also known as aerostats gain their lift through large gas filled bags which are filled with lifting gases such as helium or hydrogen. The market for airships is expected to grow due to their rising demand for surveillance globally.

The growing concern for safety has lead to the increasing demand for surveillance. However, the requirement for monitoring of large areas is leading to the demand for economic methods of surveillance. Airships have lower maintenance cost and can monitor a large area by staying uplifted for long time periods. These factors are aiding to the demand for airships in surveillance applications. Furthermore, the airships are being used as a mode of advertisement as they have the ability to stay up in the air with little or no movement which helps the advertisements to cover a larger target area. Moreover, advertising on airships has been analyzed to be much more cost effective compared to other forms of advertising.

However, there are some issues related with the use of airships that can hinder the growth of the market. Currently, most of the airships operated with the help of lighter than air gases such as helium and hydrogen. However, hydrogen is a highly flammable gas which has led to several accidents earlier. Hence it becomes risky to operate an airship filled with hydrogen. Furthermore, the airships travel at a much slower speed compared to the modern day jets. Hence, the application of airships in commercial travel is being restrained due to slow speeds. Nevertheless, research is being conducted to develop hybrid airships which are supposed to run with the help of solar energy to avoid the operational hazards associated with lighter than air gases. The concept of hybrid airships is expected to push the demand for airships in future.

By region, the airships market has been segmented into North America, Europe Asia Pacific, Middle East and Africa and Latin America. North America and Europe is expected to dominate the airships market regionally. The dominance of this region is due to the presence of developed countries like the U.S., U.K. and Germany where maximum research and development and manufacturing facilities are present for airships.

Key Players Mentioned in the Report

The global Airships market can be segmented as follows;-