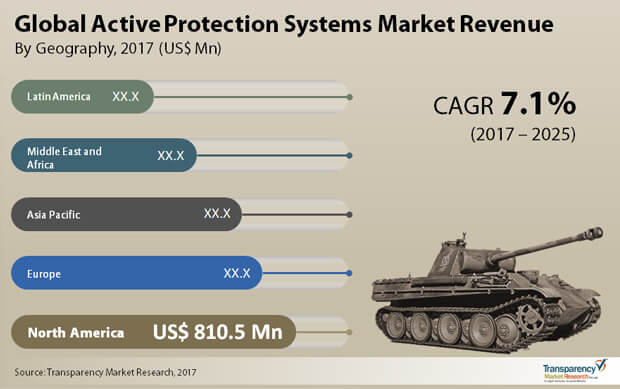 North America, at present, is a dominant market that accounts for maximum market share. In 2016, the market in the region held a share of 26.8%. Supplanting of old technology with new advanced technology and growing automation in defense are predicted to be the two major growth drivers in the North America in the next couple of years.

Europe, powered by the U.K., is another key market for active protection systems. The growth in the regions is also supported by Russia, Germany, and France. Rising allocation for defense, increasing terrorist attacks, and replacement of old defense equipment with new ones, are some of the factors pushing up demand in the market in the region.

Asia Pacific, of all the regions, is expected to clock maximum growth in the global active protection systems market in the years to come. The factors serving to catalyze growth in the region are the rapid modernization of military equipment in different countries of China, India, South Korea, and Japan. India is expected to grow at the highest rate for the forecast period.

The active protection systems market is estimated to observe substantial growth across the assessment period of 2017-2025. The escalating enhancements made in the deployment of new-generation anti-tank missiles have urged the governments of various countries to upgrade their defense mechanisms.

The active protection system market has been segmented on the basis of system types into radar decoy, electro-optics jammers, infrared decoy, directed energy, light weapon defense, rocket/missile based and others. In 2016, radar decoy segment dominated the market followed by infrared decoy segment and expected to be the same for the forecast period of 2017 – 2025. Increase in the terrorist activities and increase in the investment in military segment by developing countries are some of the major factor boosting the market for the radar decoy segment in active protection system market.

The active protection system market has been segmented on the basis of end users into homeland security and defense. In 2016, defense segment dominated the market followed by homeland security segment and is expected to continue in the coming years. Increasing demand of land based defense, increasing demand for advanced weapon and increase in the terrorist activities are some of the major factor driving the market for the defense segment in active protection systems market for the forecast period of 2017 – 2025.

The segments covered in the active protection system market are as follows: