Stringent regulation regarding the fluoride, sodium fluoride, hydrogen fluoride, and fluorine contamination in water is anticipated to propel the activated alumina market during the forecast period. Institutes such as The International Agency for Research on Cancer (IARC) and the World Health Organization (WHO) monitor and regulate standards for fluorine contaminations in the water. Activated alumina is an extensively used to absorb fluoride, sodium fluoride, hydrogen fluoride, and fluorine impurities from the water. Activated alumina is a highly porous and granular form of aluminum oxide. It is used as desiccant, adsorbent, catalyst in oil & gas, water treatment, and chemical processing industries. Activated alumina is manufactured by dehydroxylating aluminum hydroxide. Activated alumina has high surface area, thus ensuring excellent adsorption abilities. Activated alumina is one of the widely used catalysts in the Claus process. It contains a large number of catalytically active sites; therefore, it is employed to absorb hydrogen sulfide and sulfur dioxide during the Claus process to yield elemental sulfur. It is widely used as a desiccant and adsorbent in the oil & gas industry. It is also extensively used in the removal of moisture from natural gas, removal of sulfur compounds, dehydration of high acid gas, dehydration of ethanol, purification of feedstock, separation of paraffin, and desulfurization of streams. 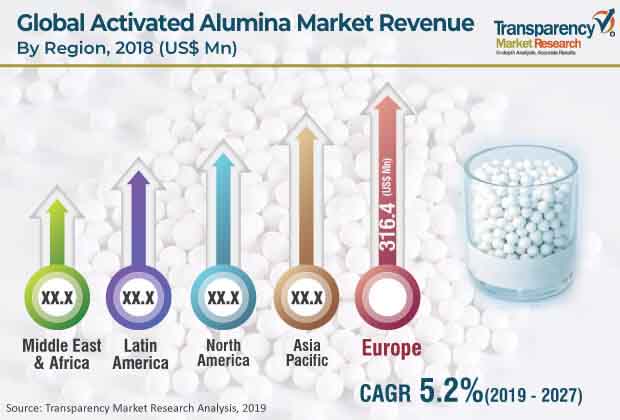 Water scarcity across the globe is one of the major global problems. Demand for water is increasing at substantial pace, as population across the globe increasing. According to a report published by the United Nations, 1.8 billion people are expected to be living in geographies with absolute water scarcity by 2050; therefore, to counter this problem governments across the globe are investing in water treatment infrastructure and technologies. For example, the Government of China allocates around US$ 110 Bn per year for environment protection and pollution control, which includes waste water treatment. Arsenic, lead, and fluoride are some major contaminants present in water streams. Activated alumina helps remove these contaminants effectively. Thus, increase in investments in wastewater treatment and water recycling are anticipated to drive the demand for activated alumina in the near future.

In terms of form, the beads segment constituted a major share of the global activated alumina market in 2018. Activated alumina beads offer high surface area to mass ratio and are highly pours, which makes them a highly efficient absorbent in various applications. These beads are extensively used in the water treatment applications to the removal of impurities such as fluoride. They are used in the oil & gas applications to dehydrate compressed air and gases such as liquid petroleum gas (LPG) and compressed natural gas (CNG). The beads segment is estimated to expand at a rapid pace, due to high demand for water treatment infrastructure across the developing economies.

Demand for Activated Alumina to Increase in Water Treatment Application

In terms of revenue, Asia Pacific leads the activated alumina market owing to the rise in investment in the water treatment infrastructure industry, which can be attributed to an increase in industrialization and urbanization in emerging economies such as China, India, and Japan. Increase in government investment in water treatment infrastructure and technologies and rise in demand for gases such as LPG and CNG have augmented the demand for activated alumina in the region. Asia Pacific is a prominent region of the market owing to the presence of a well-established industrial base, which continuously requires investment, in the region.

The report comprises a detailed value chain analysis, which provides a comprehensive view of the global activated alumina market. The Porter’s Five Forces model has also been included to help understand the competitive landscape of the market. The study encompasses market attractiveness analysis, wherein various applications of activated alumina have been benchmarked based on their market size, growth rate, and general attractiveness.

The study provides a decisive view of the global activated alumina market by segmenting it in terms of form and application. The segment has been analyzed based on the present and future trends. Regional segmentation includes the current and projected demand for activated alumina in North America, Europe, Asia Pacific, Latin America, and Middle East & Africa. The report also covers the demand for activated alumina in individual form and application segments across all regions. Key players operating in the activated alumina market include BASF SE, J.M. Huber Corporation, Honeywell International Inc., Sumitomo Chemical Co., Ltd., Axens, Porocel, Dynamic Adsorbents, Inc., KIN Filter Engineering Co., Limited, and Sorbead India. These companies have been profiled in terms of attributes such as company overview, financial overview, business strategies, and recent developments.

The report provides size (in terms of volume and value) of the activated alumina market for the base year 2018 and the forecast between 2019 and 2027. Market numbers have been estimated based on form and application of activated alumina. Market size and forecast for each application segment have been provided for the global and regional market.

The Activated Alumina Market has been segmented as follows: