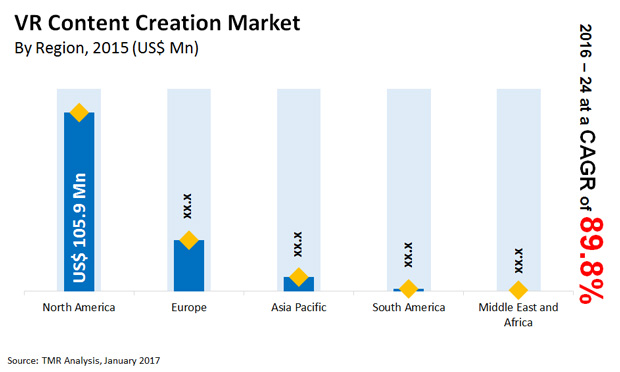 However, over the course of the forecast period Asia Pacific is forecast to exhibit higher growth. TMR has projected the region to exhibit an exponential CAGR of 116.1% between 2016 and 2024. This regional market will gain from the rising awareness about virtual reality in the region and the entry of new players.

The global VR content creation market can be segmented based on content type, end use, and solution. Among the end users constituting travel, hospitality, and event, real estate, media and entertainment, retail, gaming, and automotive sectors, the gaming industry is exhibiting the most lucrative opportunities. This industry therefore enjoyed lead in the overall market in 2015. In addition, the recent technological advancements are expected to seal the dominance of the gaming sector in the overall market.

The growth of the VR content creation market witnessed an upward trajectory during the outbreak of the COVID-19 pandemic. As governments induced lockdowns and travel restrictions, more and more people stayed indoors. This prompted them to consume more digital content in order to pass time and for entertainment and education as well. With e-commerce sector booming during the pandemic because of requirement of essential and other items, VR console sets also witnessed a promising growth.

Content creators across digital channels came up with new and innovative ideas to produce and publish their content online. VR content played a huge role in keeping global masses entertained. As such, there was an increased demand for more immersive and experience rich content. This has helped drive the market during the peak months of the COVID-19 outbreak.

Increasing demand for the head mounted displays such as AR and VR products among people across the world and easy availability of cost effective VR devices in the entertainment and gaming sector have also played a key role in driving the growth of the global VR content creation market. As the world moves towards increased digitalization, the market is expected to witness even more promising growth in the coming years.

This report provides all the essential information required to understand the key developments in the VR content creation market, growth trend of each segment and companies’ strategies to efficiently compete in the market. Also, the report provides insights related to trends and its impact on the market. Furthermore, Porter’s Five Forces analysis explains the factors which are currently affecting the VR content creation market.

The market overview section of the report demonstrates the market dynamics such as the drivers, restraints, and opportunities that influence the current nature and future status of this market, key indicators and trends. An attractiveness analysis has also been provided for every segment in the report, in order to give a thorough understanding of the overall scenario for VR content creation market. Moreover, the report provides an overview of the various strategies adopted by key players present in the market. Key market indicators included in the report provide significance of the factors which are capable of changing the market scenario. These indicators are expected to define the market position during the forecast period.

The report also highlights the competitive landscape of the global VR content creation market, thereby positioning all the major players according to their presence in the different regions of the world and recent key developments initiated by them in VR content creation market. The comprehensive VR content creation market estimates are the result of our in-depth secondary research, primary interviews, and in-house expert panel reviews. These market estimates have been analyzed by taking into account the impact of different political, social, economic, technological, and legal factors along with the current market dynamics affecting the Americas data center market growth.

The report segments the market on the basis of solution basis of content type, solution, and end-use sector. The content type segment include videos, 360 Degree Photos and games. The video segment is further sub-segmented into 360 Degree and immersive videos. On the basis of solution, the market is segmented into software/application and services. The end use sector considered in the market include real-estate, travel, hospitality and events, media and entertainment, retail, gaming, automotive and others. The report provides in-depth segment analysis of the global VR content creation market, thereby providing valuable insights at the macro as well as micro levels.

Koncept VR, VOXELUS., SubVRsive, Panedia Pty Ltd., WEMAKEVR, 360 Labs, MATTERVR and Elysian Studio Private Limited (Meraki), Matterport, Wevr, Vizor, and Blippar are some of the major players operating within the VR content creation market profiled in this study. Details such as financials, SWOT analysis, business strategies, recent developments, and other such strategic information pertaining to these players has been duly provided as part of company profiling.