Virtual and augmented reality is a suite of hardware, service and software components allowing end-users to visualize and experience virtual environment in real-time. Both virtual reality (VR) and augmented reality (AR) are expected to witness strong demand globally largely due to growing application in end-use sectors such as healthcare, education, gaming, media and entertainment, and others. Constant innovation in technology is expected to create demand for new VR and AR solutions in the coming years. Furthermore, the demand for compact VR and AR hardware devices is expected to create demand for new VR and AR hardware devices. The VR and AR ecosystem players include hardware, service and software vendors. In the coming years, both software and service vendors are expected to play crucial role in expanding the adoption of VR and AR across multiple end-use applications.  The revenue of the global VR and AR market stood at US$ 16,806.1 Mn in 2019; this is projected to expand at a CAGR of 86.0% during the forecast period (2019 to 2027) and reach US$ 2,408,749.7 Mn by 2027.

North America was the largest geographical market in terms of revenue in 2019. The presence of a large number of VR and AR players and high consumer demand led by high consumer disposable income is expected to support the demand for VR and AR in North America in the coming years. The U.S. is expected to be a significant contributor to the VR and AR market in North America. Europe is anticipated to contribute significant market share during the forecast period owing to demand from media and entertainment, manufacturing, and gaming sectors over the forecast period.

Due to high economic growth, Asia Pacific is expected to register significant growth for VR and AR solutions in the coming years. Countries such as China and India are expected to witness considerable adoption of VR and AR solutions. Middle East & Africa (MEA), and South American countries are expected to contribute less to the VR and AR market in the coming years as compared to other regions. The demand for software and service by component segmentation is expected to remain significant in the North American, Asia Pacific and European regions. Media and entertainment, and gaming segments are expected to make major contributions to the growth of the VR and AR market in MEA and South America. 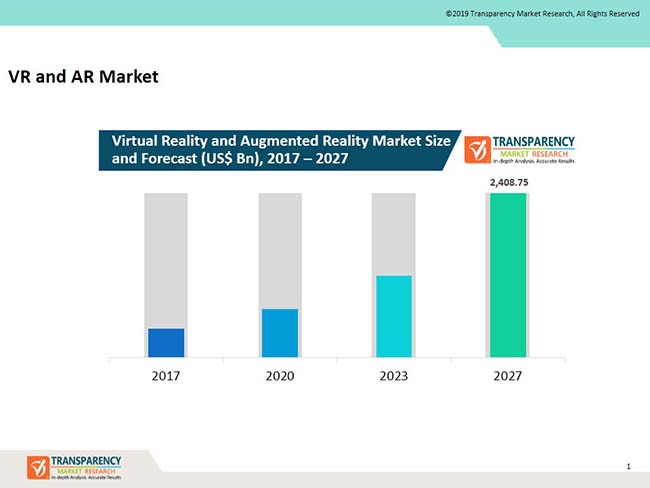 The VR and AR market is currently evolving with the presence of large number of players providing VR and AR solutions as per end-use application. In the coming years, the market is expected to witness increase in partnership and acquisition strategies by players in order to expand their market share.

Stuck in a neck-to-neck competition with other brands? Request a custom report on Virtual and Augmented Reality Market

Some of the key VR and AR solution providers were

Virtual and augmented reality is a suite of hardware, service and software components allowing end-users to visualize and experience virtual environment in real-time. The demand for virtual reality (VR) and augmented reality (AR) is expected to increase in the coming years owing to the growing demand for AR and VR service, affordable hardware cost, and increase in end-use application. The growing demand for VR and AR in healthcare, education, gaming and media and entertainment in the North American, Asia Pacific and European regions is expected to increase the adoption of VR and AR in these markets.

The report provides detailed information about the virtual and augmented reality market on the basis of comprehensive research on various factors that play a key role in accelerating the growth potential of the market. Information mentioned in the report answers path-breaking questions for companies that are currently functioning in the market and are looking for innovative ways to create a unique benchmark in the virtual and augmented reality market, so as to help them make successful strategies and take target-driven decisions.

This research report provides an in-depth analysis of the global VR and AR market based on component, end-use application, and geography. The global VR and AR market is categorized based on component types into hardware, software, and services. Furthermore, the report provides additional breakdown of hardware component into head mounted display, head up display, glasses, consoles and Sensor/Input, and others (Camera and Projector). Consoles include headset which use smartphone or tablets to display VR and AR based images to the end-user. The end-use applications for the global VR and AR market are healthcare, education, retail, gaming, construction, media and entertainment, automotive, defense & aerospace, and others (manufacturing and energy). The report further breakdown the segments as per VR and AR separately. The report analyzes each of these segments for various geographies considered under the scope of the study.

Based on geographical regions, the report segments the global VR and AR market into North America, Europe, Asia Pacific, Middle East & Africa (MEA), and South America, which are analyzed in terms of revenue generation. North America is further segmented into the U.S. and Canada, while Europe is divided into the U.K. and Germany. Asia Pacific is subdivided into China and India. Also, MEA is further segmented into South Africa and the GCC, while South America is subdivided into Brazil and Argentina. The report further provides cross-segmentation analysis of the segmentation as per the countries.

The report also provides an analysis of the factors that drive and restrain the growth of the VR and AR market. It discusses the prevailing market trends, prospective growth opportunities, and major strategies increasing the popularity of the global VR and AR market. It provides market estimates and forecasts for all the segments in terms of revenue. The report further provides estimates and forecasts for head mounted display, glasses, and console under hardware segment in terms of volume. The report also provides industry evolution, impact analysis of VR and AR market on smartphone, tablet, PC and TV Adoption, value chain analysis, and Porter’s Five Forces Analysis for the global VR and AR market.