The fact that usage of prefilled syringes does not require any assistance from trained medical staff, it has eliminated the need for hospitalization, which is benefitting the overall market to a large extent. The research report states that the U.S. and EU-5 prefilled syringes small molecule market will reach a valuation of US$17.1 bn by the end of 2024 from US$9.15 bn in 2015 as the market expands at a CAGR of 6.0 % to 8.0 % during the forecast period of 2016 and 2024. 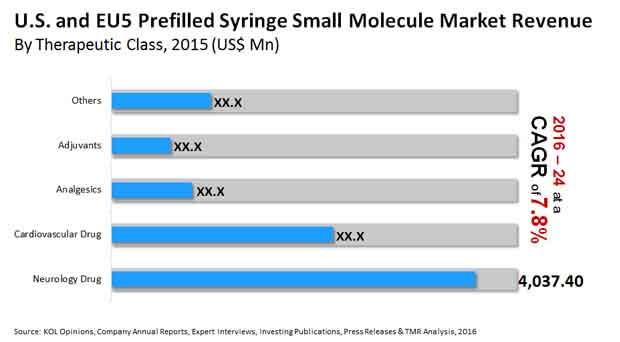 Development of Biological Products to be an Emerging Trend

The overall market is projected to witness an introduction of a new drug class, which is poised to revolutionize the U.S. and EU-5 prefilled syringes small molecule market. Known as biological products, this drug class requires significantly high investments for both research and development. A score of stability issues and the higher monetary risks are expected to slow down the progress of the global market.

The new drug class is expected to introduce neurological small molecule drugs prefilled syringes, which will open up several lucrative opportunities for the new as well as existing players during the forecast period. For instance, Sandoz’s Glatopa (glatiramer acetate), which has been recently approved by the U.S. FDA has opened up several opportunities for the market in the neurological small molecule drug prefilled syringe segment.

On the basis of therapeutic class, the U.S. and EU-5 prefilled syringes small molecule has been segmented into cardiovascular drugs, analgesics, neurology drug, and adjuvants. The research report indicated that the neurology drugs segment held a dominant share of more than 44% in the U.S. and EU-5 prefilled syringes small molecule market. Analysts anticipate that the segment is estimated to retain a lead in the overall market during the forecast period as well due to the non-availability of several equivalent generic drugs. The most popularly sold brand in the neurology drugs segment is Copaxone. This segment is expected to play a major role in the growing revenue of the overall market in the coming few years.

The demand for cardiovascular and neurological small molecule prefilled syringes will remain high, thus proving to be a strategic growth driver for the market. This demand will be fueled by the high prevalence of emergency situations that require safe and accurate dose delivery often considered to be self-medication.

There will be the introduction of a new drug class to the general market that is ready to transform the global prefilled syringe small molecule market, particularly in the EU-5 and US. This new class of drugs, known as biological products, necessitates substantial investments in activities pertaining to research and development. On the other hand, a number of stability problems and increased monetary risks are anticipated to slow the progress of the global prefilled syringe small molecule market.

The global prefilled syringe small molecule market is likely to bear the consequences of the switch in preference to large molecules biologics. In addition, increasing concerns about inaccuracy in dosages and quality of product quality likely to create difficulties in the market. As a consequence, there has been a sharp increase in the number of product recalls in last few years. Following this incident, a variety of healthcare practitioners are treating patients with different versions of the same medications.

The benefit of simpler injectable drug delivery at residence, on the other hand, is anticipated to spur demand for prefilled syringe small molecule in the near future. This is also likely to lower patient healthcare costs because prefilled syringes eradicate any need for trained medical professionals and healthcare facilities. When treating  diabetes, rheumatoid arthritis, and other diseases, the usage of prefilled syringes is expected to rise in the back of the facility to see the vials.