Underfill material is a filler, which is used in semiconductor packaging to offer strength, increase the impact resistance, and improve the overall reliability and thermo-mechanical performance. It is used to fill space beneath a die and adhere to its carrier. The proliferation of smart technologies and the subsequently rising demand for handheld devices such as smartphones and tablets are the key factors fuelling the demand for underfill dispensers. The demand is forecast to remain comparatively higher across emerging nations, which boast a booming automotive and consumer electronics industries.

On the flip side, the high initial investment required for research and development might limit the market’s growth in certain regions. Additionally, several smaller companies are reeling under the pressure of high research and development investment, which could have adverse impact on the overall market. Nevertheless, with the entry of new players, new products are likely to be innovated in the underfill dispenser market. This will in turn create boost the market. The global underfill dispenser market is forecast to exhibit a CAGR of 8.9% between 2017 and 2025. At this pace, the market’s valuation will reach US$91.19 bn by the end of 2025 from US$42.73 bn in 2016. 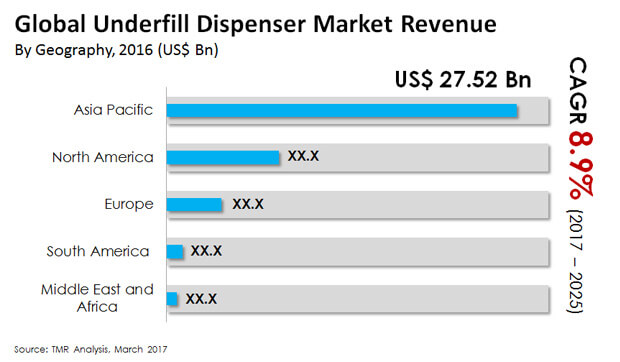 With respect to region, the market for underfill dispenser is segmented into five regions such as North America, Europe, Asia Pacific, Middle East and Africa (MEA) and South America. Of these, Asia Pacific held the dominant share of 64.4% of the overall market in 2016. Besides the fact that the emerging nations in the region are home to booming consumer electronics and automotive sectors, they also boast a strong defense sector. Countries such as India, China, and Japan allocated increasing funds in the modernization of defense equipment. This provides lucrative growth opportunities for the underfill dispenser market in Asia Pacific.

In the same year, North America held the second leading market share. The rising demand for miniaturization of smart devices and sophisticated industrial infrastructure have been supporting the market’s growth in North America. In Europe, the market will however gain from the increasing penetration of consumer electronics. Germany has emerged as an attractive market for underfill dispensers in Europe.

Considering the aforementioned scenario, a majority of the leading companies are targeting the untapped opportunities across the emerging nations. The report includes profiles of some of these companies such as Henkel AG & Co. KGaA(Germany),MKS Instruments, Inc. (the U.S.), Shenzhen STIHOM Machine Electronics Co., Ltd (China.), Zmation Inc. (the U.S.), Nordson Corporation(the U.S.),Illinois Tool Works (the U.S.),Master Bond Inc. (the U.S.),Essemtec AG (Switzerland) and Sulzer Ltd. (Switzerland).

Underfills serve the primary function of improving the service life of die packages in semiconductor industry, such as in BGAs and flip chips. They help reduce stress from mismatch caused by coefficient of thermal expansion in interconnect devices. A range of dispenser valves are used in underfill dispensing market. New jetting systems have come to the fore for improving precision of dispensing among other performance characteristics. Some of the ways this is achieved are by the adoption of substrate heating and using media temperature controllers. More importantly, the demand dynamics in the market comes from the interplay of factors such as cost of ownership, ease of applications, and evolving demands in the PCB industry. The demand for high-speed jet dispensing in the semiconductor industry is a key trend bolstering the prospects in the underfill dispensing market. Rise in demand for smart consumer electronics industries has also opened new, challenging demands for dispensing systems. These devices are growing in production on the back of the increasing trend of electronic devices with functionality and performance in both consumer and enterprise applications. A case in point is the need for cutting-edge underfill dispensing technologies for growing number of three-dimensional integrated circuits (3D IC).

The COVID-19 pandemic has exerted unprecedented burden on population health around the world. The health pandemic has caused some of the worst upheavals in economic growth of several countries across the world. Various businesses, especially brick-and-mortar ones, suffered heavily from the vast decline in consumer demands and due to their inability to remain agile in the times of pandemic-led lockdowns. Production activities also suffered long lull in the developing and developed world. Nevertheless, some businesses across industry verticals were quick to adopt new strategic frameworks to better absorb the supply chain shocks. These aspects also played crucial role in shaping the growth dynamics of the underfill dispenser market.

This report covers the analysis and forecast of the underfill dispensermarket on a global and regional level. The study provides historic data of 2016 along with forecast for the period between 2017 and 2025 based on revenue (US$Bn).

The study provides a decisive view of the underfill dispensermarket by segmenting it based on producttype, end-use typeand regional demand. Application segments have been analyzed based on current trends and future potential. The market has been estimated from 2017 to 2025 in terms of revenue (US$Bn). Regional segmentation includes the current and forecast demand for North America, Europe, Asia Pacific, South America, and the Middle East and Africa. These have been further sub-segmented into countries and regions withrelevance to the market. The segmentation also includes demand for individual applications in all regions.

The study covers the drivers and restraints governing the dynamics of the market along with their impact on demand during the forecast period. Additionally, the report includes potential opportunities in the underfill dispensermarket on the global and regional level.

The study encompasses market attractiveness analysis, wherein applications have been benchmarked based on their market size, growth rate, and general attractiveness for future growth.

The market has been forecast based on constant currency rates. Prices of underfill dispenservary in each region and are a result of the demand-supply scenario inthe region. Hence, a similar volume-to revenue ratio does not follow for each individual region. Individual pricing of underfill dispenserfor each application has been taken into account while estimating and forecasting market revenue on aglobal basis. Regional average price has been considered while breaking down the market into segments in each region.

Market estimates for this study have been based on demand, with revenue being derived through regional pricing trends. The price for commonly utilized grades of underfill dispenserin each application has been considered, and customized product pricing has not been included. Demand for underfill dispenserhas been derived by analyzing the global and regional demand for underfill dispenserin each application. The global underfill dispensermarket has been analyzed based on expected demand. Market data for each segment is based on demand and corresponding revenues. Prices considered for calculation of revenue are average regional prices obtained through primary quotes from numerous regional suppliers, distributors, and direct selling regional producers based on manufacturers’ feedback. Forecasts have been based on the expected demand from underfill dispensers. We have used the top-down approach to estimate the global underfill dispensermarket, split intoregions. The product type split of the market has been derived using a top-down approach for each regional market separately, with the global product type segment split being an integration of regional estimates. Companies were considered for the market share analysis based on their product portfolio, revenue, and manufacturing capacity. In the absence of specific data related to the sales of underfill dispenserof several privately held companies, calculated assumptions have been made in view of the company’s product portfolio and regional presence along with the demand for products in its portfolio.

The global Underfill dispenserMarket has been segmented into: