Sports guns are non-lethal weapons that use metal tubes to fire bullets, pellets, artillery shells, darts or arrows with explosive force or compressed air. These guns are predominantly used in sporting events such as rifle shooting, target shooting, and handgun shooting. Besides competitive sports, sporting guns are also used for recreational purposes for hunting and paintball. Unfortunately, hunting guns have the capability of injuring or harming life, which has become the very reason for their plummeting sales in recent years. The research report states that the global market has a bright future. According to the research report, the opportunity in the global sporting guns market is likely to be worth US$2.3 bn by the end of 2024 as compared to US$1.6 bn in 2015. Between the forecast years of 2016 and 2024, the global market is anticipated to progress at a CAGR of 3.9%. 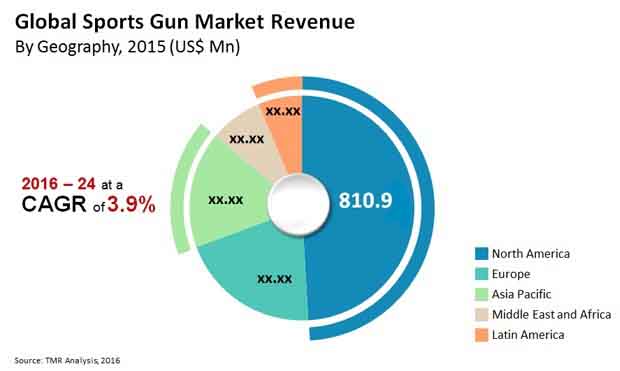 The growing awareness about shooting as a sport is expected to be the major driving force for the global market. Target shooting is known to build and enhance physical discipline amongst sportsmen. It improves motor skills, hand-eye coordination, and stamina. The persistent usage of guns increases arm strength, which, in turn, helps in improve the aim at targets. In the case of marksmen it enhances the ability to focus, thus helping them aim at targets with precision. Shooting also sharpens the eyesight, levels of concentration and is hence known as a challenging mental sport. It also challenges the mind to use logic and mathematics to calculate the wind velocity to make a winning aim. These benefits of shooting as a sport are augmenting the demand for sporting guns across the globe.

In terms of geography, the global sporting guns market is segmented into North America, Europe, Asia Pacific, the Middle East and Africa, and Latin America. North America is leading the global market in terms of revenue. As of 2015, the regional market held a share of 49% in the overall market. The lion’s share of the regional market is attributable to the growing participation of the population in sporting events, increasing investments in training students for shooting events, and the presence of strong players in the region. Europe also holds a significant share in the global market due to similar reasons.

On the other hand, the demand for sporting guns across Asia Pacific and the Middle East and Africa is expected to decline due to the high cost of components to make these products. However, the global market does have lucrative opportunities in tow as several regions are focusing on refurbishing and replacing old sporting guns with new ones.

A sports gun is defined as a non-lethal or less-lethal rifle, pistol, handgun or shotgun intended for competitive and recreational shooting, recreation, and hunting purposes. These guns are increasing in popularity owing to the surge in participation of emerging and developing economies in global shooting events. The global market is projected to grow in the near future.

The strong growth in competitive shooting is driving the growth of the sports gun market. Sports guns are manufactured in large varieties, each differing from another on the basis of power source, barrel, propellant, projectile, ammunition, calibers, technology, cutting type, or legality in various countries across the world. A sports gun is relatively lighter and more compact than the other gun types; hence it is much easier to carry around. In addition, progress in end use industry applications is supporting the market currently.

Due to the surging participation in global sporting events from the emerging economies, the sports gun market is expected to witness growth and development in the coming years. In spite of this, manufacturing of these guns is consolidated, and concentrated in a few regions all over the world. Hence, there is an ever-escalating competition among the key players in the global sports gun market. High incidence of mergers and acquisition among these market leaders has resulted into increase in sales thus driving the global sports gun market. Further strategies adopted by these organizations to improve their product portfolio and strengthen global presence include long run contracts, and offering innovative products. They also concentrate on investment of substantial amount of their net sales on research and development, for the introduction of smaller sports guns with reduced weight, longer firing range, and greater accuracy levels. The value chain network of the global sports gun market consists of producers, distributors, and certain end-user industries.

On the basis of gun types, the global sports gun market is segmented into shotguns, rifles, and handguns. Rapid growth in demand for rifles is one of the major factors that are driving the demand for sports gun industry, globally. The international sports guns business scenario has been witnessing an astounding speed of consolidation, due to giant industrial conglomerates taking over smaller organizations rapidly.

In terms of regions, the global sports gun market has been segregated into five geographical zones: North America, Europe, Asia-Pacific (APAC), Middle East and Africa (MEA), and Latin America. Currently, North America holds the major share of the market, followed by Europe, Asia Pacific, and Middle East and Africa. The Asia Pacific region is anticipated to grow swiftly with rise in trade with North America and Europe. Regional players are focused on partnerships with players in regions such as Africa.

Key Players Mentioned in this Research Report are:

The segments covered in the global sports gun market are as follows: