Governments around the world are exploring various ways of improving energy efficiency and security during prolonged power-cuts. This has created lucrative prospects for the smart gas meter manufacturers. As per Transparency Market Research (TMR), the market is also likely to gain impetus from the favorable policies drafted in various nations to curb the carbon footprint. Furthermore, smart gas meters offer end users greater control over their electricity consumption and bills. Spurred by these factors, the global smart gas market is expected to report a CAGR of 32.2% between 2015 and 2023.

Despite witnessing promising growth opportunities, the high initial investment required for installing smart gas meters limits the market’s trajectory to an extent. Nevertheless, the rising energy demand in Asia Pacific is likely to boost opportunities for the market in the near future. 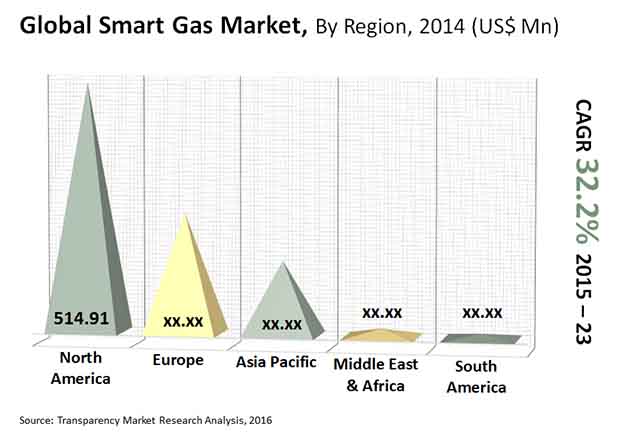 In North America, Canada, Mexico, and the U.S. are currently exhibiting the highest demand for smart gas meters. In Europe smart metering initiatives are propelled by the increasing investments by the governments of Italy, France, and the U.K. The member nations of the European Union, as per a recent mandate, are required to deliver smart gas meters to almost 80% of their gas consumers by the end of 2020. Such regulations are expected to augur well for the future of the smart gas market.

This research study analyzes the market for smart gas in terms of revenue (USD Million) and volume (Million Units). The smart gas market has been segmented on the basis of technology, end-user, and geography. The regional segment has been further divided into five sub-segments that comprise eleven countries, which are major players in the global smart gas market. For the research, 2014 has been taken as the base year, while all forecasts have been given for the period from 2015 to 2023. Market data for all the segments has been provided at the regional as well as country-specific level from 2015 to 2023. The report provides a broad competitive analysis of companies engaged in the smart gas business. The report also includes the key market dynamics such as drivers, restraints, and opportunities affecting the global smart gas market. These market dynamics were analyzed in detail and are illustrated in the report with the help of supporting graphs and tables. The report also provides a comprehensive analysis of the global smart gas market with the help of Porter’s Five Forces model. This analysis helps in understanding the five major forces that affect the market structure and market profitability. The forces analyzed are bargaining power of buyers, bargaining power of suppliers, threat of new entrants, threat of substitutes, and degree of competition.

The high-level analysis in the report provides detailed insights into the smart gas business globally. There are currently numerous drivers of the market. One of the most prominent drivers is the need to reduce carbon footprint and increase energy security of various economies. Market attractiveness analysis was carried out for the smart gas market on the basis of geography. Market attractiveness was estimated on the basis of common parameters that directly impact the market in different regions.