As a result of increasing instances of violence across the world, several countries have adopted initiatives to modernize their police force. Moreover, measures undertaken by various countries to counter illegal mining, deforestation and drug trafficking has also impacted the growth of the market positively. Considering these factors and also due to the rise in crime rates across most countries, the impact of this driver is currently high and is expected to remain high throughout the forecast period.

In addition, rising number of illegal activities in urban areas has led to the adoption of small weapons by various law enforcement and homeland security personnel. Small arms are best suited for counter attacks in such situations. Moreover, increasing instances of terrorist activities and conflicts have led to encounters and close quarter combat scenarios. In such situations, small arms are the most suitable weapon of choice. The impact of this driver is presently high and is expected to remain high throughout the forecast period

Drug trafficking is a major issue, which in turn gives rise to numerous anti-social activities. The U.S. is one of the biggest victims of this problem as cocaine, heroin, marijuana, and methamphetamines are illegally imported from neighboring nations quite easily. Underground organizations of Colombia and Mexico produce bulk amounts of the drugs that reach the U.S. markets. Weak penal and judicial institutions of these countries indicate that their struggle against drug trafficking will continue for years to come. Consequently, the impact of this driver (drug trafficking) on the adoption of SALW is expected to remain high throughout the forecast period

By type, the market is segmented into two different classes of weapons; small arms and light weapons. Small arms refer to weapons designed solely for individual use. Small arms include pistols, rifles, handguns, shotguns, man-portable machine guns and others, whereas light weapons include arms designed to be used by a crew of two or three persons. It comprises landmines, mortars, grenade launchers, rocket launchers, Rocket Propelled Grenades (RPGs), anti tank weapons, anti aircraft weapons and others. Small arms and light weapons (SALW) are widely used in military defense, homeland security, and civil utilities among others.

In terms of application, market is segmented into military, law enforcement and others which include civilian, trainers and hunters among others. The military segment was the largest segment of the Small Arms and Light Weapons (SALW) market in 2014 in terms of revenue and is expected to maintain its dominance throughout the forecast period.

Recent trends have shown that 3D printed guns and corner shot rifles are emerging trends of the small arms and light weapons market. The market has also experienced technological advancements such as the corner shot, which is a highly technological system that can be attached to most of the handguns such as the Sig Sauer, Glock, and Beretta and are extensively used by the Special Forces

On the basis of geography, market has been segmented into four categories North America, Europe, Asia Pacific and Rest of the World (RoW). Europe occupied the largest share in the market in 2014 accounting for more than 30%, whereas North America was the second largest market in 2014. 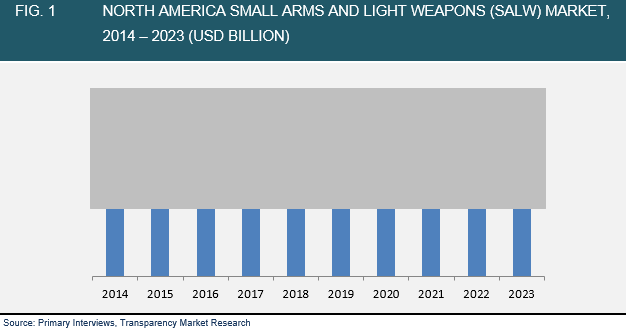 The growing interest of the civilians in different sports involving self-defense activities and shooting are estimated to pave way for the rapid development of the global small arms and light weapons (SALW) market in the forthcoming years. Surge in the incidences of terrorism activities and armed violence in different parts of ther world have resulted in civilians purchasing weapons for the purpose of self-defence. Several military and law enforcement agencies have made considerable investments in the industries worldwide for the purpose of making acquisition of advanced systems of weapon including shotguns, rifles, and pistols. Riding on the back of these factors, the global small arms and light weapons (SALW) market is anticipated to observe growth in the forthcoming years.

Higher incidences of terrorism in Asia Pacific and Middle East countries have resulted in programs of soldier modernization program and police modernization program. Initiatives taken by countries like France, the US and Russia against such terrorist activities are expected to raise the demand for these weapons. The measures to curb incidences of drug trafficking and violations of human rights have made considerable contribution toward the growth of the global small arms and light weapons (SALW) market in the forthcoming years. Strategic alliances and mergers and acquisitions have led to activities of product development and growth.

Security agencies in many of the developed countries are continuously looking for ways to take up these advanced weapons in an effort to better security. In addition, rising cases of numerous illegal activities in several urban areas has further left a positive impact on the global small arms and light weapons (SALW) market in the years to come.

Small arms and Light Weapons (SALW) refers to two different classes of weapons. Small arms refer to the kind of weapons designed solely for individual use whereas, light weapons includes arms designed to be used by a crew of two or three persons. The global Small Arms and Light Weapons (SALW) market has been categorized on the basis of types, application and geography. The market on the basis of type has been segmented into small arms and light weapons. The small arms segment has been further divided into six types; pistols, rifles, handguns, shotguns, man-portable machine guns and others. Similarly, the light weapons market has been divided into eight categories: landmines, mortars, grenade launchers, rocket launchers, Rocket Propelled Grenades (RPGs), anti tank weapons, anti aircraft weapons and others. In terms of application the market for Small arms and Light Weapons (SALW) has been segmented into: military, law enforcement and others. The Small Arms and Light Weapons (SALW) market has been bifurcated geographically into four regions: North America, Europe, Asia Pacific and Rest of the World (RoW). The Rest of the World has been further segmented into Middle East and Africa and South America.

However, the presence of stringent firearm legislations across various countries is one of the major restraints hindering the growth of the Small Arms and Light Weapons (SALW) market. For example, in the U.K., the use of handguns is prohibited and requires special permission in the form of certificate from the police.

The market dynamics, which includes the market drivers, restraints and opportunities, has also been included under the scope of the report. Market dynamics help to understand the current trends in the global market by providing insights of the distinctive factors that influence the growth of the specific market. Thus, this report provides an inclusive study of the global Small Arms and Light Weapons (SALW) market and also provides forecast of the market for the period from 2015-2023.

The global Small Arms and Light Weapons (SALW) market has been segmented into:

Global Small Arms and Light Weapons (SALW), by Geography: The market is broadly segmented on the basis of geography into: