Selenium sulfide is also called as selenium mono sulfide. It is a solid formulation of sulfur and selenium. It occurs in either bright orange or yellow orange in powder or tablet form at room temperatures. The compound may or may not be soluble in water. In early 1950s, selenium sulfide was given approval for medical use. Selenium disulfides is an inorganic compound that is utilized as a treatment medication for tinea versicolor. Tinea versicolor is a fungus that causes discoloration of skin. Selenium sulfide is also used for treating dandruff, and seborrheic dermatitis. It is a highly effective cytostatic as well as anti-infective agent that is commonly used for treating fungal infections affecting skin. It is generally applied to the infected area as a shampoo or a lotion. Selenium sulfide is also available as a generic and over the counter medicine.

Growing popularity of selenium sulfide is mainly because of its highly cost effective treatment. In addition to this, there are rising number of end use applications for personal care products, hair care products and grooming that are also helping to drive the demand for selenium sulfide. Furthermore, the growing and booming personal care industry, in which selenium sulfide is a vital component, is being driven by the increasing disposable income of customers and evolving lifestyles. Such developments are also projected to drive the overall growth of the global market in coming years. However, some known side effects such as temporary hair loss, dry scalp, oily scalp, and skin irritation can occur due to constant use of selenium sulfide products. That might impede the market. Nonetheless, anti-dandruff shampoos and dermatological skin lotions are expected to emerge as key application sub-segments and their growing popularity will ultimately help in the overall development of the global market over the given period of forecast.

The selenium sulfide market is extremely consolidated and has been characterized by an oligopolistic environment globally. Investments in emerging markets such as Asia Pacific, Latin America, and Africa present immense scope for growth in the near future, as does new product development.

While the growing demand for personal care products is a key factor driving the global market for selenium sulfide, the imposition of strict government regulations pertaining to its application in personal care products also poses a severe challenge. Keeping this in mind, the demand for selenium sulfide is estimated to rise at a modest 2.2% CAGR from 2016 to 2024. The revenue generated by this market in 2015 was pegged at US$27.5 mn and is likely to reach US$35.6 mn by 2024, expanding at a 2.9% CAGR therein. 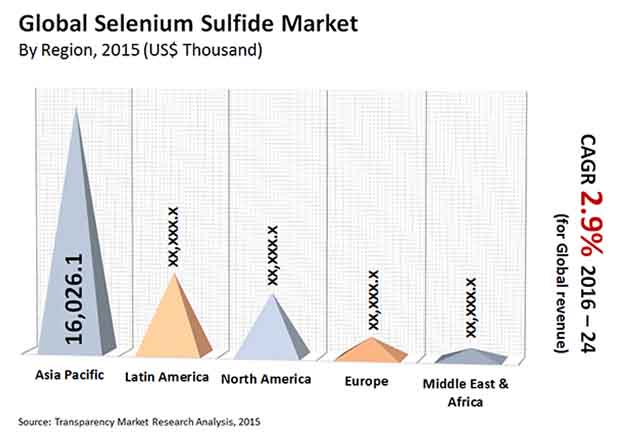 The global market for selenium sulfide has been segmented into Asia Pacific, North America, Europe, Latin America, and the Middle East and Africa. Asia Pacific accounted for the leading share in the selenium sulfide market in 2015 due to the increasing demand for personal care products and cosmetics in the region. Rapid growth in population and an increase in disposable income are positively impacting the lifestyle and buying preferences of consumers. This, in turn, is boosting the personal care industry in the region.

Rising awareness about veterinary care in Asia Pacific, coupled with an increase in the usage of veterinary medicines, is also expected to drive the APAC selenium sulfide market in the near future. The region is anticipated to maintain its dominance during the forecast period, led by rapid growth in emerging economies such as China, India, Thailand, and Singapore. China is the leading consumer of selenium sulfide-based products in the world; the country accounts for more than 50% share of the total consumption in Asia Pacific.

Selenium sulfide is sulfide salt of selenium. It is present in bright orange or yellow-orange powder or tablet form at room temperature. It is insoluble in water or ether. It can be dissolved in carbon disulfide. Selenium sulfide decomposes in alcohol and can get ignited when it comes into contact with silver oxide. When heated, it releases toxic fumes of sulfur oxide and selenium. Selenium sulfide is an anti-infective agent, which is used for the treatment of dermatitis and dandruff of the scalp. It is employed in the treatment of skin infections such as tinea versicolor, sehorrheic dermatitis. It is also used in pharmaceutical formulations for veterinary medicines.

The report provides in-depth analysis and forecast of the selenium sulfide market on the global and regional level. It includes forecast for the period from 2016 to 2024 in terms of volume (kilogram) and revenue (US$ thousand). Quantitative data has been derived through extensive secondary research of the global selenium sulfide market. Secondary sources typically include company websites, relevant magazines, government documents, and press releases. The top-down approach has been adopted to derive the regional numbers from global revenue and volume figures. Furthermore, the bottom-up approach has been employed to derive data for various product segments based on demand for selenium sulfide in each geographic segment. A combination of top-down and bottom-up approaches helps validate the quantitative data. The data was further validated with the help of primary research with industry experts to ensure accuracy of derived numbers.

The report includes value chain analysis to help understand the industry thoroughly. Value chain analysis comprises detailed evaluation of the roles of various entities involved in the selenium sulfide industry, from raw material suppliers to end-users. Various processes employed in the manufacture of selenium sulfide have been included in the value chain analysis. Porter’s Five Forces model has been employed to determine the degree of competition in the market during the forecast period. Company market share analysis has been included for better understanding of the competitive landscape. Company market share analysis comprises the market share of dominant players in 2015, based on their production capacities. Furthermore, market attractiveness analysis has been conducted to analyze product segments that are expected to be lucrative during the forecast period. This is based on various factors such as market size, growth rate, profitability, raw material procurement, and competition in each product segment.

This report segments the global selenium sulfide market as follows: