The global of supervisory control and data acquisition (SCADA) market has gained significant momentum in the recent times. The rising awareness among consumers regarding the benefits of SCADA, such as the real-time detection of faults in machinery, reduction in the amount of defects in the output, decline in production cost, and various other advantages it offers to production processes, is boosting this market substantially. The increasing deployment of SCADA systems in the electrical and the oil and gas sectors to reduce losses and optimize production is also adding to the growth of this market significantly. 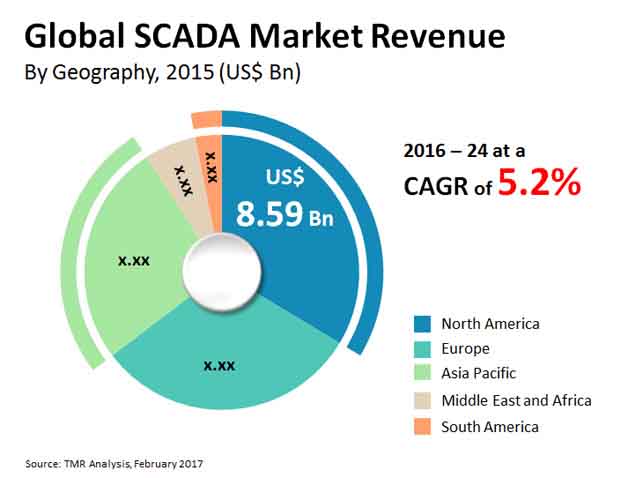 The electrical power, oil and gas, manufacturing, water and wastewater, transportation, chemicals, food and beverages, telecommunication, and the pharmaceuticals industries are key end users of SCADA systems across the world. The electrical power industry has been registering a higher demand for these systems than other end users and is likely to remain doing so over the forthcoming years, thanks to the increasing application of SCADA in total grid automation projects various developing countries, such as India and China, which have concentrated on improving their infrastructure in order to curb power distribution and transmission losses.

Apart from this, the ability of SCADA systems to restore power post outrage, re-route power from excess capacity areas to areas approaching overload, collect historical data for trend analysis, and decrease manual labor by relocating affected sections remotely, is also projected to keep the demand for these systems in the electrical power industry high in the years to come.

Regionally, North America, Asia Pacific, Europe, the Middle East and Africa, and South America are considered as the main segments of the worldwide market for SCADA. North America, among these, led the global market in 2015 with a share of 33.6%. Researchers predict that this regional market will retain its lead over the coming years, thanks to the increasing demand for process automation systems in a number of industries, such as the electrical power and the oil and gas sectors. The escalating financial and technological investments for reliable and sophisticated power management is also anticipated to propel the North America SCADA market in the near future.

With Germany surfacing as the leading contributor, Europe emerged second in the global market in 2015. The regional market is expected to remain the same till 2024. The increasing demand for advanced power, oil and gas, and water and wastewater infrastructures and the growing need for effective power generation are likely to drive the Europe SCADA market over the forthcoming years.

Asia Pacific is projected to be driven by the increasing demand for process automation in the oil and gas industry, swift development of industrial infrastructure that supports the integration of process automation, augmented efficiency in wastewater management, and the rising exploration activities in new renewable energy resources in the near future. The Middle East and Africa, on the other hand, is anticipated to derive growth from the massive investments in automated control systems in the process industries, up-gradation and replacement of old infrastructure, and the augmenting demand for safer operations within the power, petrochemical, water and wastewater management, and the chemical industries over the next few years.

Supervisory control and data acquisition system primarily collects data from running industrial processes and utilize them to recognize any anomaly in the production process. Global SCADA market is primarily driven by increase in investments, for infrastructure development, in the emerging markets. The renewed interest in shale gas extraction has also driven the SCADA market forward. In the electrical power sector, SCADA systems are being deployed in countries like India and China for smart grid techniques to reduce power transmission and distribution losses. The existing supply and demand gap in the oil and gas sector has increased the need for efficient search and extraction of oil and gas.

In the emerging markets, process automation amongst industry verticals like water and wastewater management and chemicals have also been a big driving factor of this SCADA market. Considering all these positive impacts, demand for SCADA systems is set to rise during the forecast period to 2016 to 2024. Major objective for supervisory control and data acquisition (SCADA) is to acquire data from remote devices such as pumps, transmitters; valves etc. and provide overall remote control from a host software platform. It is a type of computer based industrial control system (ICS) used to monitor and control industrial processes. Above mentioned wide applications is expected to drive the growth of SCADA market in coming years.

By geography, the market is segmented into North America, Europe, Asia Pacific, Middle East & Africa (MEA) and South America. The market for supervisory control and data acquisition (SCADA) has been provided in (USD billion) in terms of revenue as well as the CAGR for the forecast period of 2016 to 2024.

The report also provides assessment of different drivers that is impacting the global market, along with the restraints and opportunities that has also been covered under the scope of this report. For each segment (such as components, architecture and end use industry), market dynamics analysis has been provided. All these factors help in determining different trends that has been impacting the overall market growth. Moreover, after taking into consideration all this factors, an extensive analysis of the region wise growth parameters of supervisory control and data acquisition (SCADA) market along with the overall assessment for the forecast period of 2016 - 2024 has been also been provided within this report. Furthermore, the report includes the porter’s five forces and value chain analysis.

The global supervisory control and data acquisition (SCADA) market has been segmented as follows: