The global train control and management system market is highly competitive and fragmented, states a new study by Transparency Market Research (TMR). The top four companies, namely, Bombardier Inc., Alstom S.A., Siemens AG, and Toshiba Corp. could occupy a share of nearly 45% only in this market in 2015. With the rising number of new entrants, the competition within the market is likely to intensify in the near future.

As per TMR’s estimations, the global market for train control and management systems, which presented an opportunity worth US$2.5 bn in 2015, will rise at a CAGR of 8.20% during the period from 2016 to 2024 and touch US$5.01 bn by the end of the forecast period. Communication-based systems witness a higher demand than other train control and management systems and are expected to continue doing so over the next few years. The benefits these systems offer, such as the reduced maintenance costs and enhanced interoperability, act as the main driving force behind the increasing uptake of these systems. 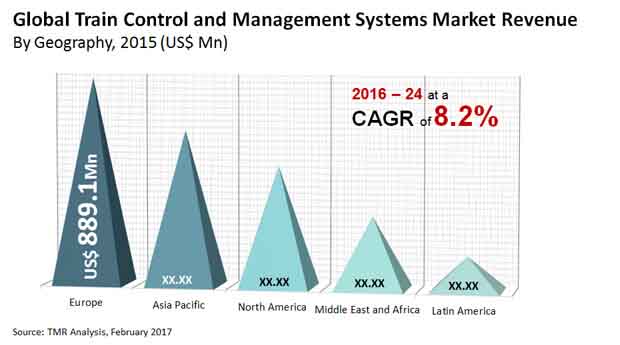 North America holds the second position in the global market and is expected to maintain it over the period of the forecast. The substantial rise in the government spending on a number of high speed rail projects in this region is likely to propel this regional market in the near future. Among others, Asia Pacific is anticipated to exhibit high growth potential for the manufacturers of train control and management systems in the near future on account of the upswing in the need for the reduction in road traffic congestion and energy efficacy. The infrastructural advancement of railways and the rise in the public investments in rail projects are also projected to drive the Asia pacific train control and management system market in the years to come, states the report.

“The growing demand for rapid rail transit systems, globally, is the most prominent factor behind the rise of the global train control and management systems market,” says an analyst at TMR. The tremendous rise in the global population has fueled the need for a technologically advanced transportation infrastructure.

Conforming to the demand, there has been a substantial rise in the investments in the intercity high-speed rail lines, which has resulted in the development of the light rail systems and subways in various regions across the world. Since train control and management systems assist in managing a centralized control over a number of subsystems of a train, their deployment in trains is expected to increase significantly over the forthcoming years. However, various risks associated with these systems, such as failure of positive train control systems, which sometimes, results in train collisions and derailments, may restrict the growth of this market in the near future, notes the study.

The global train control and management systems market has been segmented as follows: