Global TPU Films Market is Expected to be More Than US$ 1 Bn in 2025: Transparency Market Research

Transparency Market Research has published a new report titled “TPU Films (Polyester TPU Films, Polyether TPU Films, Polycaprolactone TPU Films) Market for Automotive & Transportation, Building & Construction, Aerospace, Footwear, Energy, Medical & Healthcare, Sports & Leisure, Packaging, Textile and Other End-use Industries – Global Industry Analysis, Size, Share, Growth, Trends and Forecast, 2017 – 2025.” According to the report, the global TPU films market was valued at US$ 637 Mn in 2016 and is anticipated to reach US$ 1,095 Mn by 2025, expanding at a CAGR of nearly 6% from 2017 to 2025. 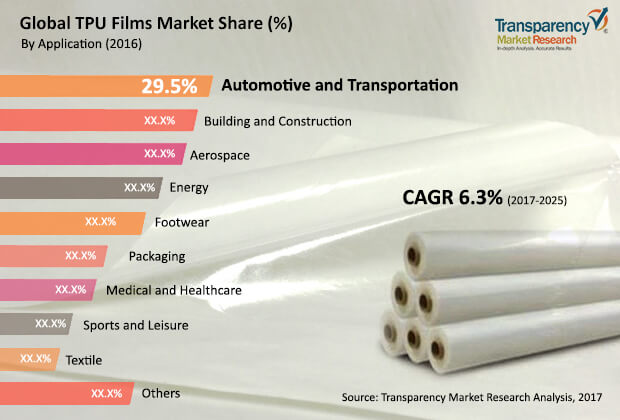 The demand for touchscreens and displays in car interiors has increased considerably due to developing digitization, network connectivity, and autonomous driving. This developing trend of digitization entails screen designs that can be effortlessly incorporated into the surfaces of center consoles, instrument panels, seat panels, and doors of the vehicle. Therefore, demand for flexible electronics in the automobile industry is anticipated to rise in the next few years. TPU films offer great flexibility and hence the manufacturers furnish these films by film processors that possess electronic functions such as sensor elements, traces, etc. With their great adhesion to textiles and extreme flexibility, TPU films offer the best fundamentals for incorporating the essential electronics into door panels. Increase in demand for flexible electronics and digitized automatic transmission systems is anticipated to drive the TPU films market during the forecast period. Furthermore, TPU films are hydrolysis resistant and perform well in hot environments compared to their counterparts. These films pigmented in bright safety colors are suitable for the production of inflatable safety devices used in the aerospace industry. TPU films also possess other important characteristics such as elasticity, weld strength, and resistance to growing fungi and microbes, which makes them an ideal choice for the manufacturing of safety equipment in the aerospace industry. The rise in demand for TPU films for the production of safety devices in the aerospace industry is expected to boost the TPU films market during the next few years. However, availability of substitutes with enhanced performance such as thermoplastic olefins are expected to hamper the TPU films market during the forecast period.

Polyester TPU held major share of the global TPU films market in 2016, as polyester TPU films are widely consumed in automotive, footwear, building & construction, and aerospace industries. The polycaprolactone TPU segment held lesser share of the global TPU films market however, it is estimated to expand at a fast pace during the forecast period due to its superior performance characteristics compared to its counterparts.

TPU films are used in a variety of applications as they offer high elasticity and low permeability along with resistance to hydrolysis, high temperature, puncture, tear and fatigue. Automotive & transportation and aerospace segments collectively accounted for more than 40% share of the global TPU films market in 2016. Market share of the footwear segment is expected to decline minimally by 2025. This can be ascribed to the rise in usage of other synthetic and bio-based counterparts.

North America held nearly 30% value share in the global TPU films market in 2016. The recent scenario depicts that the demand for TPU films for all the end-use industries is declining in the region due to easy availability of competitive and cost effective substitutes such as thermoplastic olefins in the region. Europe held a significant share of the global TPU films market, however the region is expected to grow at a comparatively restrained pace between 2017 and 2025. Germany and France accounted for a major share of the Europe TPU films market in 2016. Development of the TPU films market in Asia Pacific can be primarily ascribed to favorable government policies and growth of downstream industries. Governments of countries in the region such as China, India, Indonesia, and Vietnam are implementing favorable schemes for the manufacture of TPU films and its raw materials. This complements the easy and low cost availability of land and labor in the region. As a result, many manufacturers are shifting and expanding their manufacturing units to Asia Pacific.

The report segments the global TPU films market into: