The global thermic fluids market is foreseen to project a high-level competition, with a consolidated market scenario. Only some of the companies in the market have secured their position globally, and are anticipated to sustain their lead in the span of upcoming years as well, says an analyst at Transparency Market Research. The leading four players in the market accounted for 71% of the entire share of global thermic fluids market in 2014. This makes it difficult for the new entrants to set their foot, crediting the consolidated landscape and tough competition.

According to a recent report by Transparency Market Research (TMR), the global thermic fluids market is estimated to flourish at a CAGR of 7.10% during 2015 to 2024. In 2014, the global market was calculated to be of worth US$2.1 bn. This figure is estimated to reach around worth of US$4.17 bn by 2024-end. 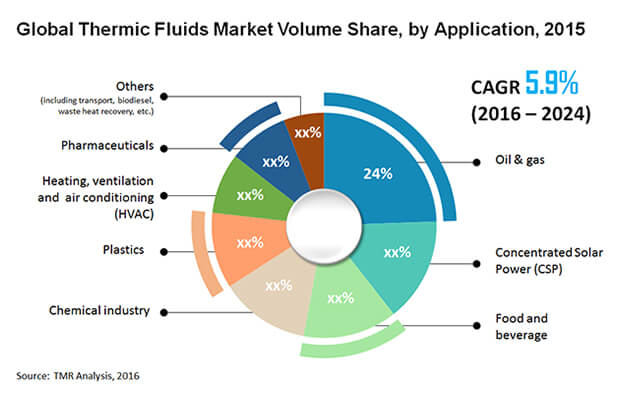 Sustainable methods for delivering energy have turned into the top-most issue of various government bodies and firms in Europe. The administration expects to expand the share of  sustainable power source in its absolute energy mix, which has moved demand regarding thermic fluids in Europe. Portugal, Greece, Poland, and Ireland are among the main nations in the market for thermic fluids. A considerable number of CSP plants have surfaced crosswise over Europe, which is another factor that is supporting the demand in the global thermic fluids market.

The review is based on a report by TMR titled “Thermic Fluids Market - Global Industry Analysis, Size, Share, Growth, Trends, and Forecast 2016 – 2024”.