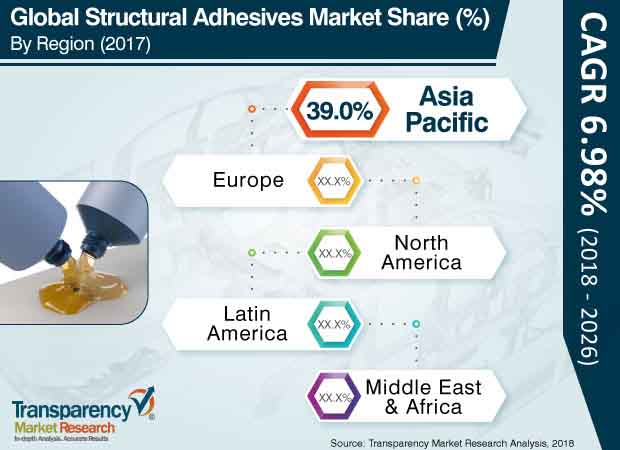 Volatile organic compounds (VOC) emitted during the use of structural adhesives pose a threat to the environment. Several countries have set guidelines restricting the amount of VOCs emitted during the usage of structural adhesives in industries. Manufacturing operations are bound by regulations and rules with respect to evaluation, registration, storage, usage, handling, and transportation of certain substances and their emissions, effluents, and other wastes. Violation of these regulations is expected to lead to legal obligation in future business activities. These environment-related regulations restrain the demand for structural adhesives in the residential and non-residential construction sector, as violation of these government regulations is projected to attract heavy penalties. Rapid industrialization and urbanization have increased air pollution, which has affected the health of people across the globe. Several developing as well as developed countries are facing pressure from domestic and international regulatory bodies to formulate regulations and principles about control of VOC emissions in order to lower the levels of pollution. Air pollutants, such as VOCs, particulate matter, carbon monoxide, oxides of nitrogen, and sulfur dioxide, cause serious health hazards to agriculture and climate worldwide. VOCs are major air pollutants in urban areas. Emission standards have been fixed to facilitate the effective control of air pollution. These standards have set permissible limits that are formulated by organizations such as the Central Pollution Control Board, Ministry of Environment & Forests, Bureau of Indian Standards, World Health Organization, and National Emissions Inventory. The National Emissions Inventory is a combination of data collected from various sources, including the industrial sector, EPA models, and numerous state and local agencies.

Based on type, the global structural adhesives market has been segmented into epoxy, acrylic, cyanoacrylate, urethane, and others. The others segment comprises silicon, anaerobic adhesives, and vinyl acetates. The urethane segment accounted for a leading share of the global structural adhesives market in 2017. The segment is likely to remain highly attractive during the forecast period, due to the cost-efficient and fast-curing nature of urethanes. Also, urethanes provide strong bonding to larger areas, which provides them a competitive advantage over other types of adhesives.