Global Rocket & Missile Market to Reach Value of US$ 36,929.4 Mn by 2027; Advantages Offered by Rockets and Missiles and Increasing Adoption of Missiles to Drive Market: Transparency Market Research

The global rocket & missile market was valued at US$ 26,868.9 Mn in 2018 and is anticipated to expand at a stable CAGR of 3.6% from 2019 to 2027, according to a new report published by Transparency Market Research (TMR)  titled ‘Rocket & Missile Market – Global Industry Analysis, Size, Share, Growth, Trends, and Forecast, 2019–2027.’ Advantages offered by rockets and missiles and increasing adoption of missiles have promoted growth of the global rocket & missile market. The market in Asia Pacific is likely to expand at a prominent CAGR during the forecast period, due to numerous technological innovations in rockets and missiles in the region. 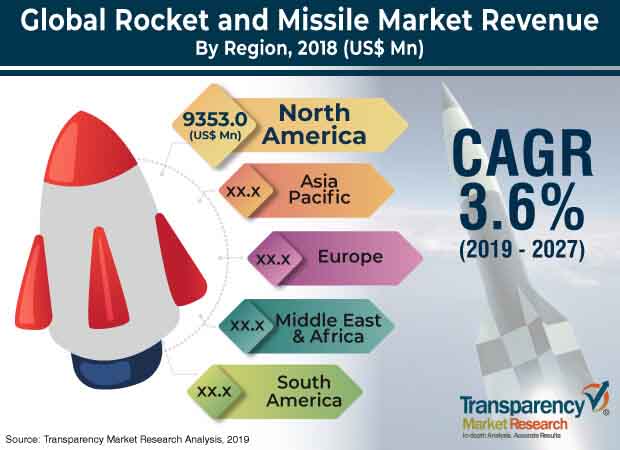 Advantages offered by rockets and missiles

In terms of product, the global rocket & missile market has been segmented into rocket & missile. The missile segment is anticipated to dominate the market with rise in the adoption of cruise missiles in military and other defense forces owing to high speed and high accuracy of missiles and continuous technological advancements in them. Defense forces of countries across the globe are increasingly preferring missiles over rockets in order to strengthen their national security, as missiles are highly effective in destroying the target with high precision and accuracy with the help of self-propelled and guided systems, whereas rockets are operated with the help of self-propelled yet unguided systems. The rocket segment has been sub-divided into artillery rocket and air-to-ground rocket. The missile segment has been sub-segmented into cruise missile and ballistic missile. The missile segment is anticipated to expand at a significant CAGR from 2019 to 2027. The rocket segment is also anticipated to expand at a substantial CAGR during the forecast period.

Increasing adoption of cruise missiles and continuous advancements in technology

Moreover, the market in Europe is anticipated to witness substantial growth throughout the forecast period, due to rise in the manufacture of rockets and missiles in various countries such as Russia, France, and Germany. Additionally, the market in Middle East & Africa and South America is expected to expand at a substantial pace between 2019 and 2027, due to rise in the government spending in major countries in these regions.

The global rocket & missile market has been segmented as follows: